Stanford coach: Replacing McCaffrey to be a team effort 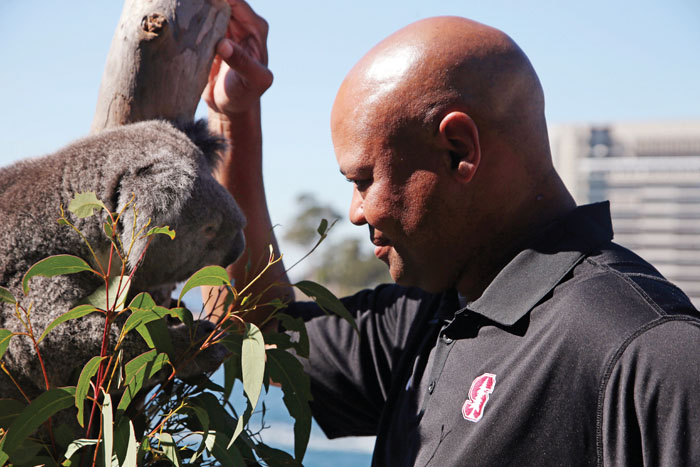 AP Photo/Rick Rycroft ... Stanford football coach David Shaw is introduced to a koala bear named Archer during the launch of the season opening NCAA football game in Sydney on Tuesday. The game will be played on Sunday in Australia, between Stanford and Rice.

Two big questions for Stanford this college football season were answered not long after coach David Shaw arrived Down Under.

And he did it with a most appropriate, Australian-style response: No worries.

Shaw said replacing running back Christian McCaffrey , who was drafted in the first round by the NFL’s Carolina Panthers, will be a total team effort, not by just by one player.

And he said quarterback Keller Chryst, who tore the ACL in his right knee in late December, is fit and ready for Sunday’s opening game against Rice at Allianz Stadium in Sydney.

McCaffrey’s figures were imposing: He set a record with 3,864 all-purpose yards in 2015 and then rushed for 1,596 yards and scored 16 touchdowns last season. In those two seasons, the Cardinal went 18-1.

No. 14 Stanford’s positional replacement for McCaffrey is Bryce Love, who averaged 7.2 yards per carry the past two seasons behind McCaffrey.

Shaw pointed out that when McCaffrey didn’t play in two games last season — against Notre Dame and in the Sun Bowl — Love scored a TD and rushed for 100 yards in each game.

“He’s more than capable of making the big plays,” Shaw said. “As far as being the ‘carry the mail guy for us’, and do it well, it is Bryce.”

McCaffrey won’t be easily replaced, Shaw knows, “But our approach is to not put it all on one person.”

“We expect our receivers to step up, our offensive line as well.  Replacing Chris is really an 11- or 12-man responsibility.”

Shaw doesn’t have to entertain any thoughts of replacing Chryst, at least at this point.

Chryst injured his knee during Stanford’s 25-23 win over North Carolina in the Sun Bowl on Dec. 30. Chryst was 6-0 as a starter last season with 10 TD passes and only one interception in those games.

His recovery has surprised the coaching staff.

“He has not shown any signs of being injured,” Shaw told The Associated Press. “I anticipated taking it slower in camp with him, but he asked me to take the training wheels off. There was no medical issue, and he didn’t feel bad at all. So we ramped it up instead of resting him.”

On the defensive side, Shaw said the experience of his returning players will help compensate for the loss of defensive end Solomon Thomas, who was drafted by the San Francisco 49ers.  Thomas had eight sacks and 15 tackles last season as the leader of a young defense.

Now, Shaw thinks Stanford’s defense can be even better.

“When you look at our team, our front seven has a lot of older players … a good mix of age and experience,” Shaw said.

The game, in which Stanford is heavily favored, will start at noon Sunday in Sydney to coincide with prime time television in the U.S. on Saturday night. It’s the last Sunday of winter in Australia and there’s a chance of rain in the forecast along with a high temperature of 64 Fahrenheit (18 Celsius).