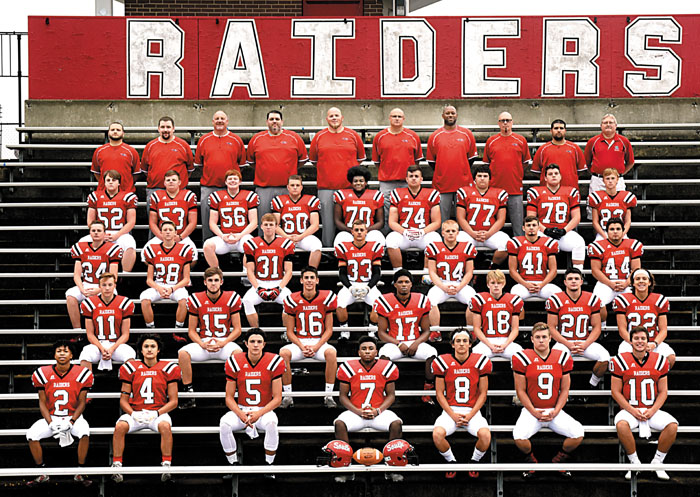 South Rowan Raiders At A Glance

State 3A playoffs: none

LANDIS — South Rowan head coach Daniel Yow doesn’t want to give the impression his Raiders are playing “iron man” football this season. But with a varsity roster of 35 players, he will have to rely on two-way players at a number of key positions in 2017.

On the positive side, almost all of his 35-man group are experienced lettermen with three years of varsity experience. With a single exception, they are all juniors and seniors. But versatility, especially along the front lines, will be important for the team’s success this season.

“Despite the numbers, we do have depth both ways and some good quality players,” Yow says.  “We tried our best to two-platoon, but it became one of those things we realized we could not do it. So, we’ll have two or three offensive linemen who will have to rotate in with our defensive line.”

Another positive is that Yow is entering his third season at the Raiders’ helm and feels his system is firmly in place. “Our offense has stayed the same for three seasons while defensively, we have made a few tweaks here and there, but nothing drastic.”

One thing that Yow and his players do want to change is the number of wins. Playing in the ultra-tough South Piedmont 3A Conference the past few years, South managed just two wins in the last two seasons, one by forfeit in 2015 and one in 2016 — a thrilling last minute victory over county rival Carson.

Now the Raiders are joining Salisbury in the new 2A Central Carolina Conference this season, along with eight Davidson County teams. Now they will be able to compete against teams more their own size.

They are tired of building character and want to put up some wins on the field.

“One thing we talked about all this off season,” Yow stated, “is we spent so much time trying to right all the wrongs. Now, we also want to win some ball games at the same time. This will be a whole new league for us and brand new opponents for the most part. We are excited. It is going to be a new era for us.”

The CCC is a tough 2A league with competition like Ledford, North Davidson, Thomasville and Lexington. But by sheer numbers, it will be a more even playing field. The Raiders do plan to continue playing neighborhood rival Carson (an 18-15 season-opening loss last Friday) and East Rowan going forward, plus West Rowan when they can work it in.

South will have to replace versatile athlete Austin Chrismon this season who is now a freshman at UNC. Yow thinks he has found a strong and intriguing replacement at quarterback in senior Brett Amburn. He did not play his freshman year and split reps on the jayvee team his sophomore year. Last season, he was fourth in the QB depth chart and only got on the field to hold for PAT kicks. Now, after learning the system, plus a lot of off-season work, Amburn has claimed the starting quarterback job.

“It means a lot to me,” said Amburn (5-11,180), who can run and throw out of the South option offense. “I put in a lot of hard work, threw a lot with our receivers and spent a lot of time in the weight room. But I like this offense. Our scheme is good and we have some true talent on the offensive side.” Yow says the ascension of Amburn is a great success story. “He just worked his butt off in the weight room, got stronger and faster,” Yow said. “He has a good arm and can run the ball. The biggest thing is that he is very intelligent and knows where everyone is supposed to be.”

Amburn will be good at the run-pass option attack the Raiders run. His primary running back is junior Demarcus Blackwell (5-7, 180) while he has another versatile weapon in senior Marquis Rhyne (6-2, 185) who can play running back, slot, wide receiver and even quarterback if needed.  Yow also plans to mix in some big bodies from time to time with Andrew Byrd, (5-6 200) and junior linebacker Michael Sloop (5-11, 195), who rushed for 42 yards and a TD last season in short yardage situations.

The wide receivers have been bolstered by a couple of senior basketball players, Colton Childers (6-3, 165) and Garrett Harrington (6-5, 185). They also have a deep threat in senior Kory Sellars (one TD last season)  and junior slot Cameron Hurd (5-6, 160), who caught 12 passes for 145 yards last season.

The top offensive lineman is senior All-Rowan County tackle Patrick Brooks (6-2, 222), who will also play defensive end as well and a little tight end this season. He will be joined up front by Dalton Alvarnas (5-10, 215) on both sides of the ball.

On defense, the strength is a linebacker with Sloop returning, along with junior Jarrid Nelson (6-0, 200). “I think those two could be the best linebacker duo in the county this year,” Yow said. “They  both made a lot of progress in the off-season and are so much better.”

The defensive backs will include Childress, Sellars, Malaki Littlejohn and Christian Reynolds.

The Raiders will also feature soccer player German Delgadeo as their kicker. He has a strong leg and good field goal range.

“We have a lot of good kids this season,” Yow says. “We have a lot of skill guys we are excited about, so we just have to make sure our line can block for them. If they do, we will be alright.”

Brett Amburn  –Senior ,QB (5-11, 180), with no true varsity experience, Amburn has worked hard the past two seasons and summer to claim the job. He will operate the Raiders’ run-pass option attack.

Marquis Rhyne – Senior, WR, Slot (6-2, 185). The most versatile player on the team, Rhyne could show up in a number of positions during games. He is a wide receiver, a slot receiver, a running back and can also play QB if needed.

Michael Sloop – Junior, LB (5-11, 195). One of the team’s leading tacklers last season, he also rushed for 45 yards and a TD in short yardage situations; caught two passes for 15 yards.