Small roster but Carson promises to battle in new NPC 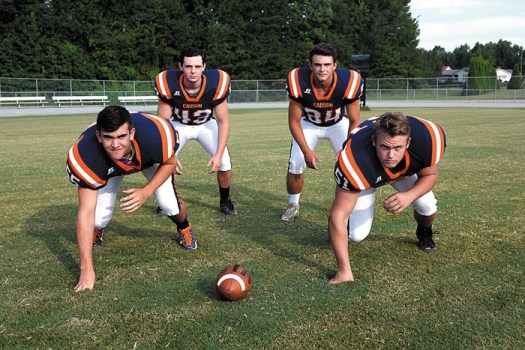 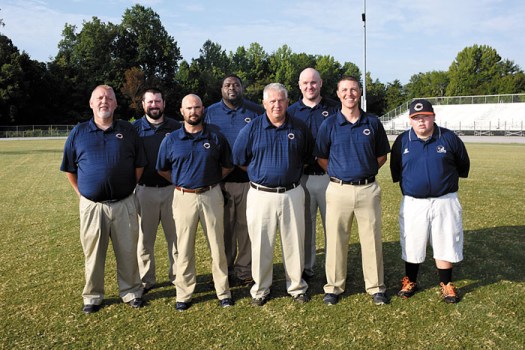 Cougars At A Glance

CHINA GROVE –  Kenny Clarke, one of Carson’s best offensive linemen and a guy who also was counted on defensively, went down with a knee injury on opening night. Clarke was one of nine Carson seniors. Now the Cougars have eight.

Every football season comes with a certain degree of high hopes and expectations, but Carson coach Joe Pinyan has known for a while that 2017 would be a challenging campaign. A tiny senior class, coupled with a modest junior class, means adversity. Carson has a fine coaching staff — former head coaches Jason Rollins (South Rowan) and Barry Mitchem (West Davidson) are on board in addition to Pinyan — and Carson has players who never give up, but this season is going to be more about surviving than thriving.

Pinyan, who accomplished great things at Salisbury for a decade before coming to Carson, also served on a lot of Mooresville staffs before he returned to his Rowan roots. He’s been coaching 30 years. This will be the shallowest team he’s ever been a part of, with just about everyone going both ways.

“This is all new to me,” Pinyan said. “I’m like that kid at Christmas who doesn’t have any idea what’s coming next.”

Throw in an impossible non-conference schedule — juggernauts A.L. Brown and Davie are opponents for the first time — and Carson is going to be hard-pressed to match last season’s modest achievements of four wins and a playoff appearance. In non-conference action, the Cougars also will see talented speed teams in North Rowan, Salisbury and Central Cabarrus.

Carson was outscored by more than 100 points in 2016, and three of the four wins came very early. The most impressive victory was beating Central Cabarrus, but that was the game cornerback/returner Brenden Westbrook took over by himself, and Westbrook is at Catawba College now.

“We think the NPC is a better league for all of us,” Pinyan said. “I know we beat Hickory Ridge two years ago, but we probably had no business doing it.”

Cole Sifford, a second team all-county running back (142 carries, 635 yards) is the marquee returner for the Cougars. He’ll be asked to play quarterback this time, as the Cougars don’t have baseball phenom Owen White on the roster. Sifford is a good runner, smart, quick and tough. Sophomore Hunter Courtney will be an important ballcarrier and has the speed to get to the corner on pitch plays. He’ll get help from Josh Lee, Gerardo Cipres and Ben Coulter.

The main receiving targets  for Sifford figure to be Clayton Gilmore, a fast baseball player, and Jamarius Hairston, a tall basketball player. Hairston, one of the county’s most talented hoops stars, is on the Carson football team for the first time.

On the offensive line, Nick Klein and Joseph Collins will be leaders. Their jobs got tougher with  Clarke sidelined.

On the defensive line, Carson offers experience, with Josh Malloy (6-1, 250), Teolyn Woodruff (6-2, 215) and Justin Thomason (6-2, 215). The D-line guys who start will be backups for the offensive line, just as the o-line starters will be called on for depth on defense.

Zain Tucker, Devin Gay and Jacob Taylor lead the linebackers and spurs. Cipres will be used on defense as well as offense. Josh McCurry follows two older brothers who made their mark as standout linebackers for the Cougars.

Jailen Williams, a senior who is making a return to football, will start at cornerback. Williams is the basketball team’s exceptional point guard. Pinyan expects Thairell Parks to man the other corner. A.J. Jackson, last year’s jayvee QB, and Tyler Thompson are the top safeties.

The kicking game, usually a Carson strength, is a work in progress. Woodruff is the likely punter, with sophomore Juan Espinoza expected to take care of PATs and field goals.

Football is a welcome outlet for Pinyan after a difficult July. On July 12, he lost his mother, Sylvia Marie Aldridge Pinyan. She died at 82 years old.

“My biggest fan,” Pinyan said. “She never missed a game.”

On July 29, one of Pinyan’s former players, 23-year-old Daquan Robertson, was killed in a shooting in Salisbury.

“When we won the state championship at Salisbury (2010), Daquan was such a big part of that team,” Pinyan said. “Just very sad.”

Carson’s narrow opening win against South Rowan was pretty huge for a lot of reasons. Carson may not be favored again until it sees North Iredell on Oct. 6. North Iredell has lost 15 straight.

“South is one we really needed to get,” Pinyan said.

SOME COUGARS TO WATCH: