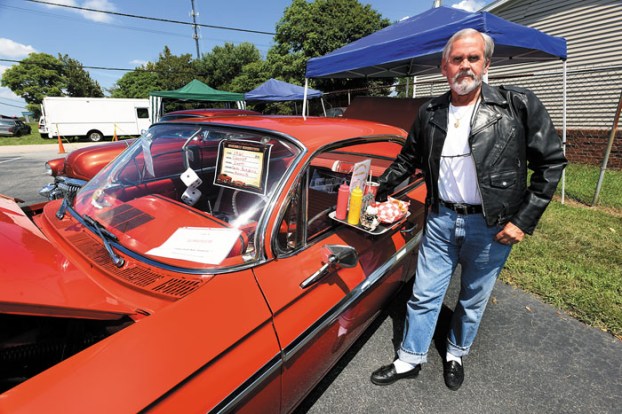 Charles Humphrey from Mooresville stands beside his 1961 Chevy Impala at the 2017 Rockabilly Resurrection Car Show in Kannapolis at the VFW Post 8989. He is dressed in blue jeans, white socks, leather jacket with a curb service food tray on his car for the 1960's Rockabilly show. Wayne Hinshaw, for the Salisbury Post

KANNAPOLIS — It was rockabilly time once again Saturday at Kannapolis VFW Post 8989.

Dr. Kenny Welch staged the second annual Rockabilly Resurrection Car Show. Welch travels across the country as an emergency room doctor who fills in on a temporary basis. His home is in Kannapolis.

Welch loves late 1940s and ’50s rockabilly music and the bands that still make the sounds of early rock ‘n’ roll with a touch of country and blues stirred in the recipe.  “Rock” stands for rock ‘n’ roll and “billy” stands for hillbilly music that folks, at one time, called early country music.

Why not tie the knot between rockabilly music and a car show?

“Kannapolis died with the closing of the textile mills,” Welch said, so he wanted to bring something back to help with the resurrection of the town.

The car show was planned to resurrect Kannapolis and honor Elvis at the same time. Rockabilly was brought back from the dead with a “pin-up” contest with 1950s fashions. The money raised was to go to the  VFW Post.

Dozens of vintage cars were on hand, such as Charles Humphrey’s 1961 red Chevy Impala from Mooresville. He wore his best rockabilly outfit with blue jeans, a white T-shirt, white socks, loafers and a black leather jacket. He had a life-size cardboard cutout of actor James Dean dressed as the character he played in “Rebel Without a Cause” in 1955. Dean was wearing a red jacket. Humphrey wore black, like Fonzie in the TV show “Happy Days.”

Marett Mattox of Statesville posed by her 1953 Pontiac Chieftain in her 1950s dress and hairstyle that she planned to model in the pin-up contest for ’50s clothes.

Mark and Ashley Walters of Greensboro came in original 1950s clothes for the pin-up contest. They are in the Gate City Vintage Society Social Club, for which the latest styles are clothes from the 1920s to the 1950s.

Eric Lasker of Salisbury had his 1932 Ford “Hi Boy” Roadster in the car show with a pair of female mannequin legs hanging out from under the roadster. It was an eye-catcher for sure.

Drag racer Justus Daniels had his 1952 “Henry J” on display. His car is named the War Wagon with its silver-and-black paint job.

The back window of the Henry J has a heart-shaped top. For those who remember the Kaiser cars, the Henry J was the compact model at the time.  Seventy-year-old Daniels was on his way to Richmond, Virginia, to race when he found out the race was canceled, so he stopped at the car show.

Inside the VFW Post, bands like Jim Crossland and the Hypertonics, Mystery Hillibillies, Phantom Playboys, Slippery Jake and the Bad Brakes, the Art-Tones and the Crazy Man Crazy band from Savannah, Georgian, filled the air with tunes that would have made the original rockabillies tap their feet and snap their fingers — performers like Jerry Lee Lewis, Elvis, Carl Perkins, Buddy Holly, Johnny Cash and Little Richard.

The dance of the day was the swing. Dance instructor Tom Bach and his partner, Noella Paquette, warmed the dance floor to match the temperature of the heat outside the VFW Post.

New Teacher, Principal of the Year named for Rowan-Salisbury Schools