Prep Football Special: James Teal was the best 50 years ago 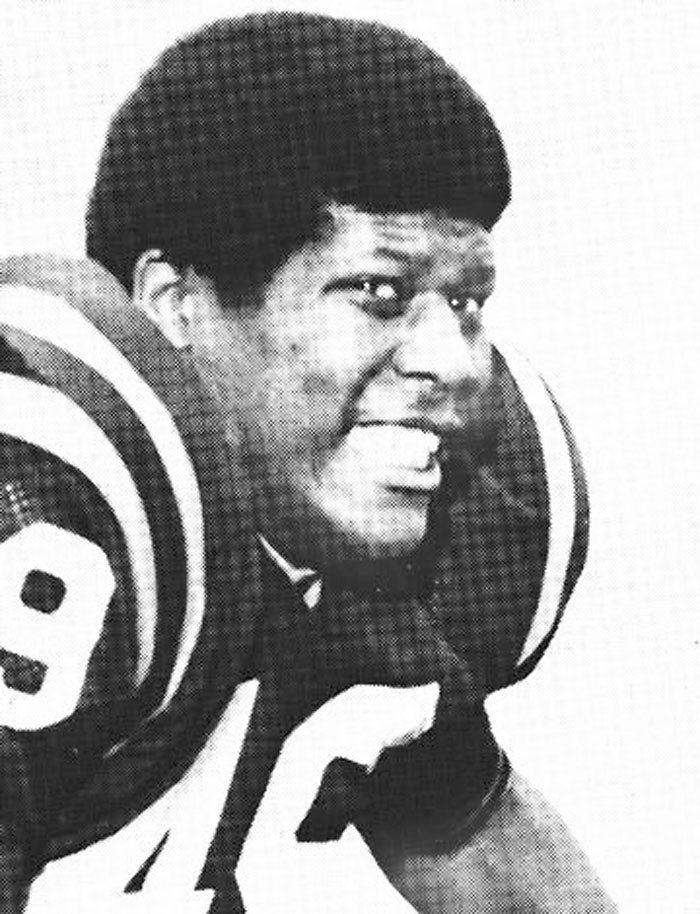 File photo James Teal, a former Boyden High School football player, shown in his Purdue University uniform. He was among the first black athletes in Rowan County to attend one of the traditionally all-white schools.

He was among the first black athletes in Rowan County to attend one of the traditionally all-white schools.  He played both ways for the Yellow Jackets from 1965-67— offensive line and linebacker. He went on to star at Purdue University and made it to the NFL.

The yardsticks for measuring prep greatness in the 1960s were the Shrine Bowl and the East-West All-Star Game. Teal passed that test. He was chosen for both all-star squads at a time when black athletes had to be sensational to be considered.

The team that represented North Carolina against South Carolina in the Shrine Bowl at Charlotte’s Memorial Stadium was restricted to white athletes through 1965, but there was a major uproar after Jimmy Lee Kirkpatrick, a black Myers Park back, was snubbed for the 1965 team. The media was certain Kirkpatrick was the state’s best running back. His exclusion led to change.

In 1966, West Charlotte’s Titus Ivory and Sylva-Webster’s Tommy Love integrated the Shrine Bowl for North Carolina. In 1967, four black players were chosen to represent N.C.  Teal was one of them. He wore the No. 50 jersey and played on both sides of the ball in a 27-21 South Carolina victory. He weighed a modest 199 pounds, but he stood out as a guard on offense and linebacker on defense.

“I remember Shrine Bowl week because everyone on our team had abilities, everyone was talented,” Teal said. “But I remember visiting the kids in the Shriner’s Hospital more than the game. Those kids grabbed your heart.”

Teal had no plans to be a pioneer while growing up. His mother worked as a live-in maid in New York, and she couldn’t have a child with her, so Teal came to live with his aunt and uncle on Standish Street in Salisbury, near Livingstone College.  J.C. Price, the school for black students in Salisbury, was within easy walking distance for Teal.

“I grew up with the dream of playing tight end for Price,” Teal said. “I had no plans to go to Boyden, but as a freshman at Price, I got kicked off the team.”
Teal remembers getting a cut on a cinder track that led to an infected knee. Teal usually ran laps up front at Price practices, but that bum knee had him running closer to the rear. His struggle was perceived as laziness. He was dismissed from the squad.

“I really wanted to play football,” Teal said. “The only option was Boyden.”

Ken Bumgarner was in the last of his three years as Boyden’s head coach in 1965 when Teal arrived.  Boyden was playing 4A football in the NCHSAA, taking on Winston-Salem, Greensboro and High Point schools without much success. Boyden was 3-7 during Teal’s sophomore year.

But a new staff, headed by former Catawba star Pete Stout, arrived before the 1966 season.

“I still wanted to play tight end and catch passes,” Teal said. “First hour of the first day, we’re hitting those practice dummies, and I told (assistant) Charlie Little that I was a tight end. He stared at me and said, ‘You’re my guard.'”

Boyden went 6-3-2 and made the playoffs. Boyden had its hands full with Garinger All-American Charlie Jetton in that playoff game in Charlotte.

“Jetton and (Lexington’s) William Walser were the two best I played against in high school,” Teal said.

“Coach Stout was a good coach,” Teal said. “He understood leverage, angles, footwork. That’s one of the reasons I was able to advance as far as I did in the game.”

In 1967, Teal’s senior year, Boyden played a far different schedule as a member of the Western North Carolina High School Activities Association, but the South Piedmont Conference was a tough league. Boyden went 5-4-1, but Teal made All-SPC and All-Rowan County. In addition to being on the Shrine Bowl team, he was an honorable mention All-American.

Teal cultivated a reputation as a tough guy.

“I wore one of those big forearm pads, and I wrote ‘Ouch!’ on it — and big enough to be seen,” Teal said with a laugh.

Teal wanted to play at UNC.

“Mostly because people kept telling me I wasn’t good enough to ever start there,” Teal said. “When people told me I couldn’t do something, I was determined to prove them wrong.”

UNC had signed its first black scholarship football player, Ricky Lanier, in 1967, but opportunities were still limited in the ACC and SEC. But, especially after the Shrine Bowl, Teal was drawing a lot of attention from the Big Ten.  Thoroughly integrated and with black stars at most of its schools, the Big Ten was a magnet for black players in the South. Teal believes it was the strongest college league at that time.

Minnesota and Ohio State wanted Teal badly. But Purdue had the inside track because Purdue assistant coach Don Fuoss had played at Catawba College in the 1940s and had married a Salisbury girl. Fuoss made recruiting Teal his priority, and Teal signed with the Boilermakers on March 19, 1968.

“When Purdue started recruiting me, they had just won the Rose Bowl with Bob Griese, they had (All-America back) Leroy Keyes and they were of the best in the country,” Teal said. “But once I got to Purdue, it was Ohio State going to the Rose Bowl just about every year.”

Teal toiled on the offensive line for a shaky Purdue freshman team. So he wasn’t expected to be a factor his sophomore year.

“I finally convinced the coaches that I was too small to play on the offensive line in the Big Ten,” Teal said. “I told them I needed to move over to defense, and they gave me a chance to try out at outside linebacker.”

The rest is history. Teal came out of nowhere to earn a starting berth as a Purdue sophomore.

“It was picture day (1969), and they called me out there as a first-string linebacker,” Teal said. “I’ll never forget that feeling.”

As a junior, Teal was Purdue’s leading tackler. As a senior, he was a captain. He earned All-Big Ten accolades and he remains one of the top tacklers in Purdue history with 294 stops. Most of the players ahead of Teal on the all-time list had the benefit of playing four seasons, but he did what he did in three.

“We played tough teams,” Teal said. “The biggest rivalries for us were the other schools in Indiana — IU and Notre Dame. I played with some great players, like Dave Butz, and the toughest player I went up against was (Michigan guard) Reggie McKenzie. We went at it for years. He was in the NFL a long time for a reason.”

The 17 rounds of the 1972 NFL Draft were held over a two-day period in early February in New York City. McKenzie went to the Buffalo Bills to start the second round and would become famous blocking for O.J. Simpson.

Teal had to wait longer to be drafted. Teal’s Purdue roommate, a defensive back named Charlie Potts, was picked by the Detroit Lions in the sixth round. In the 10th round, Teal also became a Lion.

“I would’ve made the team in 1972, but I tore an ACL in the last preseason game,” Teal said. “And sports medicine and technology then weren’t what they are now. My ligament had snapped in two, and they took that ligament and just stapled it to my knee. They put me in a cast, hip-to-toes, and I faced a long recovery period.”

He was never quite the same, but he was good enough to make the Lions in 1973.

“I was the first replacement at both outside linebacker spots and I played on special teams,” said Teal, who had managed to get his weight up to 215 pounds for the pros. “I made my mark on special teams. I tried to be the first one down the field.”

“Charlie Sanders taught me more than anyone in pro football,” Teal said. “All the way back to high school, I’d always hit the guy across from me in the head with my forearm, just dazed him a little. That would be a penalty now, but that’s how you played the game then. But when I hit Charlie with my forearm, he’d just grab it, and throw me to the ground. He told me I needed to figure out something else.”

Teal has plenty of war stories about his days with the Lions, who were still playing at Tiger Stadium. He remembers Chicago Bears linebacker Dick Butkus, meanest man in a mean league, smashing Lions scatback Altie Taylor out of bounds, and driving him and rolling him toward a wall.

“That’s when I was still in a cast, but I jumped up and said, ‘Hey, did you see that? Isn’t somebody going to do something?'” Teal said. “But no one said a word and nobody stood up. It was Butkus.”

Teal’s time with the Lions was brief. There was a dispute over his pay, and he filed a grievance with the NFL Players Association. That’s not the sort of thing a team is going to let slide, not when it’s a rookie backup making the claim, and Teal was traded to the Los Angeles Rams.

That ended up being a positive for Teal. One of the Rams had just been signed by the Birmingham franchise in the new World Football League. Birmingham also needed a linebacker, and signed Teal. He played for the Birmingham Americans (1974) and Birmingham Vulcans (1975) at Legion Field.  Teal performed well, making several key interceptions.

From there, it was on to the Canadian Football League for Teal, who finished his playing career with the Ottawa Rough Riders in 1977.

Teal has lived and worked in North Carolina and Michigan since leaving football. He’s had two knee replacements, but he’s getting along OK.

“I’d like to get back to North Carolina someday,” said Teal, who celebrated his 67th birthday in May. “I’d like to trade my snow blower for a lawn mower.”

Teal was elected to the Salisbury-Rowan Hall of Fame in 2002, entering in a stellar class that included Walt Baker, Vern Benson, Jimmy Heggins, David Drechsler, Larry Thomason and Bobby Pharr, who was Teal’s basketball coach at Boyden. Teal was good in hoops. He scored 24 one night and averaged 10.4 points for Pharr as a senior. He also competed in track and field.

Teal made a name for himself in the sports world when the odds were stacked against him. He’s proud that he played at the highest level, and he offered words of advice to young athletes.

“Have faith in your abilities,” he said. “There are always going to be people telling you that you can’t do it. Never stop believing that you can, and you will succeed.”