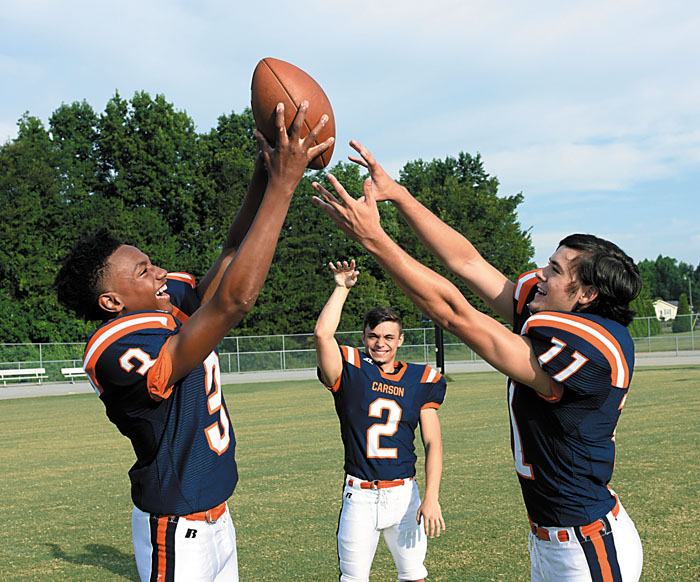 CHINA GROVE — The official program might give him a few more pounds and inches, but Carson quarterback Cole Sifford doesn’t mind admitting that he’s 5-foot-7, 155 pounds.

Those aren’t exactly ideal football measurements, but Sifford plans to make the most of his senior season.

“Pound for pound, he might be the best football player in the county,” said Carson head coach Joe Pinyan. “He’s tough, he’s fast, and he’s smart.”

Carson’s fullback as a junior, Sifford managed 635 rushing yards through a combination of excellent vision, good quickness and surprising power. He was a master of making the right cut and turning nothing into 5 yards.

But this is a new year. As a senior, Sifford is Carson’s quarterback.

“We knew that Owen White (Carson’s baseball star is a South Carolina commit and a probable draft pick in June) probably wouldn’t be playing this year, so I’ve been preparing to play quarterback, really since last season ended,” Sifford said. “This is an offense that I know really well. We ran the same offense when I was at Southeast Middle School.”

White was a stronger passer than Sifford, but Pinyan’s triple-option offense is going to stay on the ground 80-85 percent of the time, so Sifford is a perfect fit.  He’s a far more dangerous and elusive runner than the standard quarterback.

Carson’s season record for rushing yards by a quarterback is Andy Lear’s 333 in 2014. If he stays in one piece, Sifford should break that record by mid-September.

“The biggest thing is we know Cole understands the offense and can run the offense,” Pinyan said. “He’s got a take-charge personality and we believe he’ll be able to throw it enough. He’s been throwing it really well in practice. He just has to carry that over to the games.”

Last Friday, opening night, was critical for Sifford. He’d filled in as the QB starter for White once as a sophomore and twice as a junior and Carson had lost all three games. But Sifford’s first start of 2017 was a close victory against South Rowan. Sifford did everything he was expected to do — and then some — rushing 18 times for 96 yards and a TD and finishing 7-for-14 passing for 86 yards.

“We’ve got some pretty talented receivers,” Sifford said. “Clayton Gilmore can run past people. Jamarius Hairston can go up and get it.”

Carson has small roster numbers this year and is using most of its experienced players on both sides of the ball.  There was some temptation to use Sifford both ways as a running back/safety/linebacker, but the Cougars are going to let him focus exclusively on running the show at quarterback.

“There aren’t many places on the football field where he couldn’t play and play really well,” Pinyan said. “He’d be really good on defense because he’s so competitive.”

Sifford doesn’t mind hitting people. That’s what he misses most about not being the fullback.

But he understands that a major part of his job to stay healthy. Carson can’t afford to lose him.

“I’m just trying to give some leadership every day, trying to help bring the young guys along, and it’s a lot easier to do that as the quarterback,” Sifford said. “I enjoy quarterback. I like the responsibility of making good decisions. I enjoy having the game in my hands.”