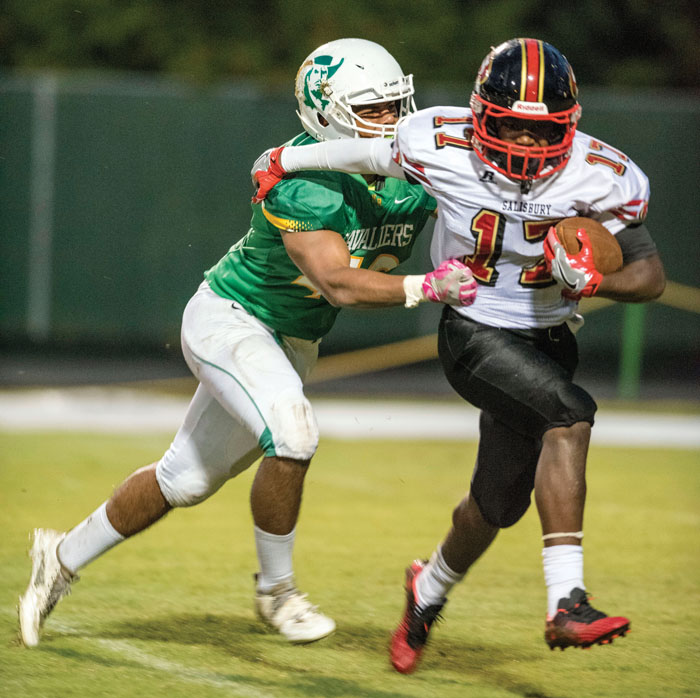 What’s  amusing is that No. 40 — senior Darren Williams — was pretty darn good last year. He was All-Central Carolina Conference and second team All-Rowan County. But when you watched the Cavaliers in 2016, you weren’t looking at Williams. You were watching Zion DeBose frighten quarterbacks, or watching Steven Thurston pulverize running backs, or watching Javin Goodine flatten anyone lucky enough to sneak past DeBose and Thurston.

“Darren had nine sacks last year,” Sophia said. “But the kid still flew well under the radar because of some really good seniors. He’s strong. He has good technique. Against Salisbury, Darren did the same things he was doing last year, only he got noticed more. Now he’s on everyone’s radar.”

Williams passes the eye test, sleek but strong. He weighs 220 chiseled pounds, About 219 of it is muscle. He could be mistaken for a statue —until he starts talking.

“We worried about him getting too light last year because he’s also a wrestler,” Sophia said. “But right now, he’s at his perfect weight for defensive end, and he’s one of the strongest in the program.”

Williams has leadership skills. Last year, he was fine being a private, happy as a role player, but now he’s more like a Big Green Nation sergeant. He takes that promotion seriously.

“I’m going to keep doing what I’ve always done,” Williams said. “But at the same time, it’s important for me to be more of a leader this season. It’s my time to do that.”

For people who only saw the final score, Salisbury is better than it looked. The Hornets led the Cavaliers, 15-13, in the second quarter. There was some pressure on North. Not only was it the first game, North was opening at home against its biggest rival.

“We got the lead at the half and I was able to get a sack right before halftime,” Williams said. “We had a lot of momentum at the half. We made a few adjustments, but mostly we just got back to playing defense the way we can and we stepped up the pass rush some. We didn’t give up any big plays in the second half.”

Williams had 70 tackles and three forced fumbles as a junior.

He got the new season off to a solid start with seven tackles. Two were sacks. Plus, he had a tackle for loss on a running play.

“One of those sacks was pretty amazing,” Sophia said. “He beat his guy at the line of scrimmage, then ran through another blocker. Then he kind of missed the quarterback (Griffin Myers), just over-ran him, but he grabbed his jersey and hung on. Then he came back and finished the play.”

While North Rowan no longer has DeBose and Thurston as part of the front four, Williams, Matthew Hoosier and Chaz McCombs all played extensively last season. Malachi Turner, Tiras Neely, Josh Mason and Ben Caldwell rotate in the fourth d-line spot and also rest the starters. While North is a 1A school, it has solid depth. Hampton has 85 players in the program, 50 on varsity.

Leading a 4-2-5 defense, which has two promising young linebackers in Nautica Patterson and Tyzai Lyles, is Williams.

“We lost some great ones to graduation, but now Darren is the new leader of our defense,” Hampton said.

Williams appears to be the right choice to lead through words as well as deeds. He has the demeanor, he has the muscle, and he has the production.

“He’s a good leader,” Sophia summed up. “Any workout that we have, he’s always there.”