From golf to football: Zain Tucker is making his mark in both sports 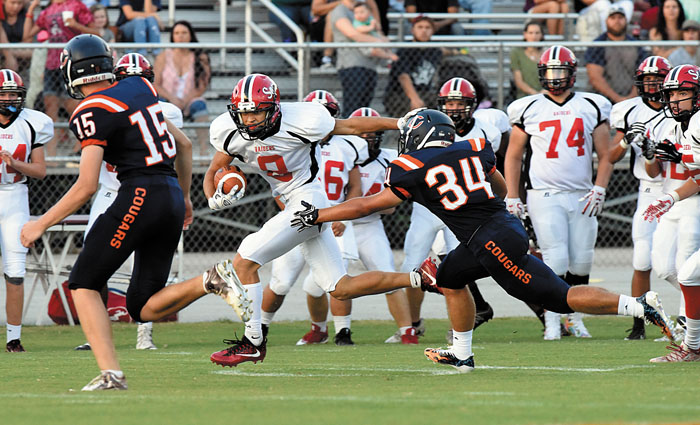 CHINA GROVE — Coach Joe Pinyan has no idea how many football games Carson will win this season, but he does believe the Cougars will lead the state in at least one category.

“We’ve definitely got the toughest names to spell,” Pinyan said.

Zain Tucker used to get his name misspelled —  he was a run-of-the-mill Zane for a while, even in the Post — but then he started shooting 70s in golf tournaments on his way to All-Rowan County honors, Gradually, it sunk in that his name was Zain, like rain or Spain, not Zane, like Jane or insane.

There haven’t been many golf/football stars in the county in the last century, but Carson might have one. It looks like football fans are going to have to learn how to spell Zain Tucker.

He was named Carson’s Defensive Player of the Week after Friday’s 18-15 win against South Rowan. Tucker (5-9, 175) deserved the accolade. He made a team-high 14 tackles, one for loss, and Pinyan credited him with being in the right place at the right time and forcing South to shank a fourth-down slant pass.

“It wasn’t just that Zain had a lot of hits and made a lot of  stops,” Pinyan said. “He made the big plays in big situations.”

Tucker is good with a 7-iron. In late June, he fired a 1-under 70 and won the 16-18 age division in a tournament at The Club at Irish Creek

Tucker was pretty good for the Cougars in football last year, but he didn’t get noticed a lot, mostly because his running mate, Isaac Bell, was tackling everyone in sight.

“I started last year, but the difference now is that I’m in much more of a leadership role as one of the seniors on the team,” Tucker said. “There aren’t a lot of us.”

“Zain is following great linebackers,” Pinyan said. “And he’s got to do a lot more than tackle people. He gets us lined up. He quarterbacks our defense.”

South led 15-12 at halftime on Friday. That was disappointing, but Tucker was confident Carson could rally.

“They hadn’t been able to get their running game going against us, and they never really got a long drive going,” Tucker said.

South had fooled Carson with a faked punt and had stunned the Cougars with a TD pass on the final snap of the first half, but Carson was handling the basic stuff pretty well.

Carson’s offense punched in a  third-quarter score to go in front, and Carson’s defense dug in and made a three-point lead stand up.

Two minutes later, Carson got a fourth-down stop at the Carson 45 to end South’s hopes.

“They had one good run, but then we got the stop we needed,” Tucker said. “That last time South had the ball was the key time for our defense. No one freaked out. We stayed together. To win the game, we knew we might have to  shut them out in the second half, and that’s what we did.”

Shutouts for a full game are almost as elusive as holes-in-one. Carson’s defense hasn’t blanked anyone since 2010 (49-0 over East Rowan). That gives Tucker something to shoot for.

“Zain is just real steady,” Pinyan said. “He’s doing everything we expected him to do.”