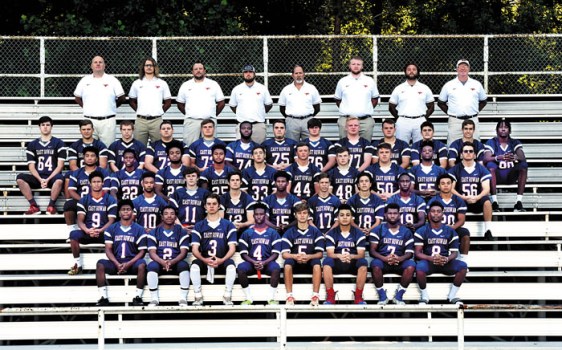 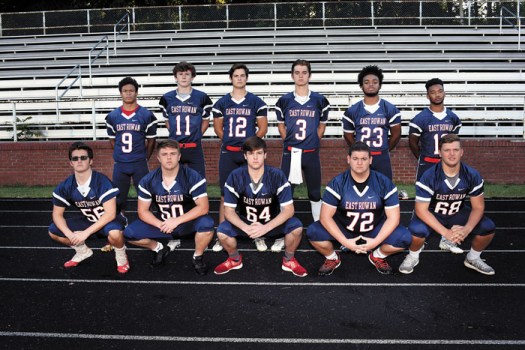 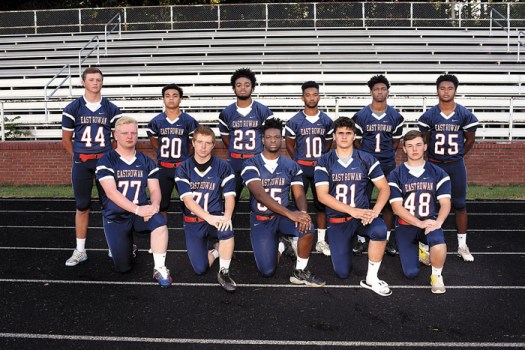 Mustangs At A Glance

GRANITE QUARRY –  Fifteen returning starters is cause for optimism at East Rowan, but Max Wall isn’t one of the returning 15, so it’s still sort of a building year for the Mustangs.

Wall was the leading rusher in East history (4,005 yards) and ranked No. 7 in county history after four varsity seasons that included 46 jaunts to the end zone. Wall ran for TDs, threw for TDs, caught TDs and even blocked punts for TDs during a pretty amazing career. Had he toiled on stronger teams, he would’ve received more acclaim than he did.

While they didn’t make the historic statistical impact Wall did, Wesley Porter and Steven Hardin also are gone. They were tough guys who gave East an identity. When Porter and Hardin walked on a field, there wasn’t any doubt East was going to play hard, regardless of the opponent. Besides catching TD passes and making a game-winning pick-six against Northwest Cabarrus, Porter probably was the county’s best return man. The versatile contributions that landed him on three all-county and all-conference teams will be hard to replace.

New coach John Fitz, last year’s defensive coordinator, takes over a program that hasn’t been a factor in a league race in a while. The last four seasons in the South Piedmont Conference — playing against much larger schools, for the most part — East was 3-5, 4-4, 2-7 and 3-6 in league games. Even the 2014 team that shattered offensive records with the Wyrick twins, mauled West Rowan and won two road playoff games, finished at 7-7 overall, so you have to go back to 2012 to find an East team with a winning record (8-5).

Moving back to the six-team North Piedmont Conference and getting Concord, Hickory Ridge and Robinson off the schedule doesn’t guarantee a winning season, but it helps the odds of achieving that goal.

Fitz and offensive coordinator Brett Hatley are bringing change to that side of the ball. East will rely mostly on finesse (no fullback, no tight end) and will operate with two running backs, two wideouts and a slot. East QB Justin Smith will be taking snaps from the shotgun and making a quick triple-option read (dive, pitch or keep).

East was involved in some crazy games in 2016, notably the Central Cabarrus and Crest contests. In both of those, East put 40 on the scoreboard — and still lost. So controlling the ball more, moving the chains with 5-yard gains or more, resting the defense, shortening the game, all makes a lot of sense.

East’s 2017 opener, a 39-25 loss at North Stanly, brought mixed results. East accumulated the sort of rushing yardage and first down totals that will normally win a game, but fumbled the ball away three times and allowed big-play runs on defense.

Since East will be using two running backs at a time, new ballcarriers are being auditioned.

“We don’t have much experience at running back because we used one back most of the time and when you’ve got a player like Max, you don’t take him out much,” Fitz said.

East will count on a running back committee that will include Deontae Gallman, Nate Hamilton and Noah Green, and possibly freshman Vincent Jones.

The scouting report on Smith is that he’s more of a passer than a runner, but Fitz has been pleased with how he’s adapted to the new offense.

“The main thing is he’s got to read the defense right and make a good decision,” Fitz said. “He’s running the ball surprisingly well, and he’s a very good passer. We’ve got more of a passing threat than option teams usually have at quarterback. He’ll keep defenses honest.”

Four offensive linemen with a lot of experience are on hand — center Lucas Hedrick, guards Cole McGraw and Hunter Eagle and tackle Landon Tuck. Sophomore tackle Dylan Goodnight is counted on as the fifth starter.

Sam Wall, Max’s younger brother, is small, but he brings the same sort of speed and athleticism that Max did. He’ll be a threat running and receiving out of the slot. Gabe Hinceman, Peyton Lambert , Mustafa Davis and Jax Fitz, the coach’s son, are the top wideouts. Lambert was just a kicker last season, but he’s dropped soccer for football and has impressed Fitz with his pass-catching ability.

“It’s not easy to throw the ball over Elton,” Fitz said.

Lots of opponents are pass-happy now, and East will employ three safeties. Two of them — Gallman and Green — will see double duty at running back. Clay Washington is expected to be the other starter.

Punting is up in the air.  Hinceman is expected to handle kickoffs, with Lambert the frontrunner for PATs and field goals. Return men will include Wall, Gallman and Davis.

“We’ve always been pretty good on special teams, Fitz said. “We need that to continue.”

The reality is that East might be a year away from being really good. Most of the studs are juniors.

Best-case scenario? Five or six wins against a lighter schedule.

Worst-case? 3-8 or 4-7 and another season in the second tier of the conference.

SOME MUSTANGS TO WATCH:

Lucas Hedrick – Jenior center (6-3, 220). He’s going to be awfully important in East’s new offense. He’s got to make shotgun snaps that are accurate and his timing with Smith has to be precise. At times, Smith is going to be moving forward as he takes the snap.