Little Leaguers from Greenville have two no-hitters under their belts 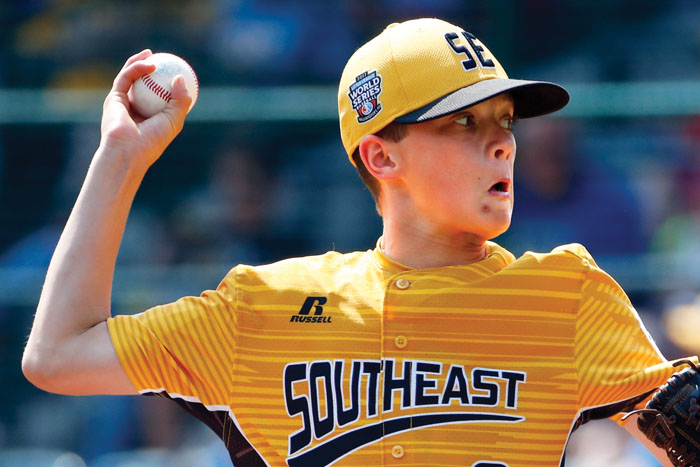 File-This Aug. 20, 2017, file photo shows Greenville, N.C., pitcher Chase Anderson throwing in the second inning of a baseball game against Rancho Santa Margarita, Calif., in United States pool play at the Little League World Series tournament in South Williamsport, Pa. At the Little League World Series, the question now is not whether anyone can beat the team from Greenville, North Carolina. It’s whether anyone can get a hit. Neither Sioux Falls, South Dakota, nor Rancho Santa Margarita, California, was able to do so against Greenville’s pitching staff in the first two rounds. It’s the first time at Little League World Series that a U.S. team has thrown consecutive no-hitters. Japan did it in 2002. (AP Photo/Gene J. Puskar, File)

SOUTH WILLIAMSPORT, Pa. (AP) — At the Little League World Series, the question now is not whether anyone can beat the team from Greenville, North Carolina.

It’s whether anyone can get a hit.

Neither Sioux Falls, South Dakota, nor Rancho Santa Margarita, California, was able to do so against Greenville’s pitching staff in the first two rounds.

It’s the first time at Little League World Series that a U.S. team has thrown consecutive no-hitters. Japan did it in 2002.

Greenville used three pitchers in its 6-0 first round win Friday against Sioux Falls. Chase Anderson, Matthew Matthijs and Carson Hardee combined for 10 strikeouts and no walks to complete the seventh perfect game in LLWS history.

It wasn’t just the top of the order, either. Twelve of the 13 Greenville players recorded at least one hit and nine had at least one RBI.

“They’re unbelievable,” Rancho Santa Margarita manager C.J. Ankrum said. “One through nine and even their pinch hitters, they got in the batter’s box and they wanted to hit. You got to tip your cap to them. They did a great job.”

Leading the charge offensively have been Hardee and Thomas Barrett. Barrett has gone 5-for-6 and scored three runs in the tournament while Hardee cracked a grand slam in Greenville’s second game and totaled five RBIs.

What’s more, Greenville has been flawless in the field, too. The team hasn’t made an error through two games and Hardee made a diving snare at shortstop against Rancho Santa Margarita that’s been one of the plays of the tournament.

“Right now it’s just crazy that we’re in it,” Hardee said. “It feels so different when you’re here than when you’re watching it on TV. Not a lot of people get to do this, so I understand how lucky this team is to be here, but I don’t think it’s going to hit until we get back to Greenville.”

Anderson and Matthijs were able to pitch in the first two games because Greenville can keep pitch counts low — Little League requires at least one rest day, and as many as four, once a player has thrown more than 21 pitches in a day. All of Greenville’s pitchers will be available to throw in Wednesday’s game against Lufkin, Texas.

Greenville’s accomplishment is all the more remarkable given its back story.

Last October, Hurricane Matthew tore through the Southeast, including the Greenville area. The home of Cash Daniels-Moye, a starting outfielder, was damaged so badly by the wind and rain he had to stay in a hotel.

The community responded by hosting a two-day baseball tournament to raise money for his family. Another Greenville family was also hit by the storm. Greenville Little League raised more than $20,000, and about half was donated to the two families.

Greenville is out in force at South Williamsport. Bright yellow, the team’s color, fills Howard J. Lamade Stadium whenever the Southeast is on the field, and the parents and supporters from Greenville have been among the biggest and loudest crowds.

“I can’t tell you how much Greenville and the surrounding community and now the state, have been behind us really since the state tournament,” manager Brian Fields said. “They were loud. They were like the 10th man out there and we’re going to need these folks.”

Greenville’s game against Lufkin on Wednesday is a semifinal in the U.S. bracket, featuring the last two unbeaten American teams. The winner will play the survivor of the loser’s bracket for a berth in the tournament championship against the international representative.

“Those guys from Texas are good,” Anderson said. “We’re going to have to compete with them, and I don’t think we’ll be nervous at all.”

Jack Dougherty is a journalism student at Penn State. Penn State is partnering with The Associated Press to supplement coverage of the 2017 Little League World Series.