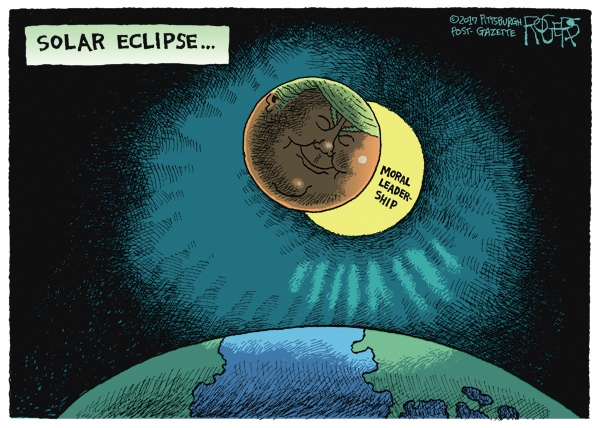 You might have missed it, because while it happened in plain sight, it also happened in increments. You had to put the pieces together to appreciate the magnitude of it.

This, of course, was in response to that pathetic performance in the wake of the tragedy in Charlottesville, Virginia, when he suggested moral equivalence between white supremacists and those who protest them. In response, America — a pretty broad swath of it, at least — has condemned him.

The reference is not to the shellacking he took from pundits or the reprovals of GOP leaders Mitch McConnell and Paul Ryan. These things were to be expected.

But you did not expect the chairman and CEO of Merck to quit the president’s American Manufacturing Council. And Ken Frazier’s departure, which he framed as “a matter of personal conscience,” was just the opening salvo. He was followed through the door by members of that panel and others. By week’s end, two presidential business advisory groups had ceased to exist and plans for a third had been scrapped. Members of the President’s Committee on the Arts and the Humanities also resigned en masse.

Meantime, Mar-a-Lago, Trump’s club and de facto presidential getaway in Florida, saw a rash of charities canceling their fundraising events. The Washington Post listed the Salvation Army, the American Red Cross, Susan G. Komen and the American Cancer Society among those who have chosen to hold their galas elsewhere.

And there is yet more. Bob Corker, a respected Republican senator who has heretofore sought to engage with the president, raised sharp questions not just about Trump’s competence, but also his “stability,” and called for “radical changes” in the White House. Five military chiefs also spoke out against the bigotry in Charlottesville, in a striking reproach of their commander.

Graduates of Liberty University called on fellow alumni to return their diplomas to protest LU president Jerry Falwell Jr.’s support for Trump. And on Saturday it was announced that the president would not be attending the Kennedy Center Honors in December, nor host the traditional White House reception for the five honorees after three of them had spoken of boycotting the event.

And really: How toxic are you when Lionel Richie doesn’t want to shake your hand?

It seems that a great many Americans reached a moment of decision last week and reacted as you would have hoped. Trump and his apologists and enablers should take note, because this does not bode well for them.

For all its powers of lawmaking, war making, budget drafting, and diplomacy, the presidency also embodies the power of moral suasion. A president uses what Theodore Roosevelt called “the bully pulpit” — the honor and prestige of his office — to stand for what is right and remind us to do likewise.

Problematically, that office is occupied now by a man with no moral compass, a man whose only true North is self. So what happened last week was sadly predictable.

What was not predictable was this chorus of castigation from such a wide spectrum of American life. The stunning rebuke offers heartening evidence that we have not yet completely abandoned who and what we are supposed to be.

Again, this is a moment of decision. Those who chose to separate themselves from Trump last week declared their values — and character.

Those who supported him did, too.