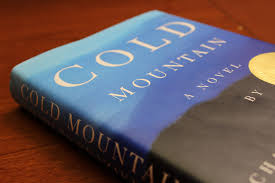 Charles Frazier's novel, 'Cold Mountain,' follows the travels of a wounded Confederate soldier who has deserted and is making his way from a Raleigh hospital to his home on Cold Mountain west of Asheville.

“It was not a book that required following from front to back, and Inman simply opened it at random, as he had done night after night in the hospital to read until he was calm enough for sleep.”

That book was “Bartram’s Travels,” as described in Charles Frazier’s classic novel, “Cold Mountain.” Bartram’s book is a treasured possession of Inman, the wounded Confederate soldier who has deserted. As he makes his way from a Raleigh hospital to his home on Cold Mountain west of Asheville for a hoped-for reunion with his beloved Ada, he opens Bartram regularly to read its descriptions of plants, topography, animals and people.

Similarly, in rereading “Cold Mountain” to mark this year’s 20th anniversary of its publication, I found that it, like Bartram, does not require reading from front to back.

“Cold Mountain” has sold more than three million copies. It inspired a popular epic film—and an opera to be staged in Chapel Hill this fall.  As North Carolina’s most admired work of literary fiction since perhaps, “Look Homeward Angel,” it should be on the bookshelf of every home in our state.

I bet you have an old copy somewhere, one you may have not opened since you first read it. That is understandable because we are not much into rereading books. But this one, like Bartram’s, commands more than one reading. On its 20th anniversary year, “Cold Mountain” deserves a complete read.

Perhaps there is no way you can read the entire book again. So here is a compromise. On this 20th anniversary, open your copy and read 20 pages.

There are so many options. I am not sure which ones I would pick.

You could, just as Inman did with Bartram, open “Cold Mountain” at random and read a few pages. Frazier’s stories and lush language will mesmerize you.

But there are so many other choices.

*The story in the beginning of the book about Inman’s encounter with the blind peanut man near the state capital in Raleigh.

*The goat woman, stuck in the high mountains. Her goats feed her and give her a reason to live.

*Inman’s visit to a young war widow and her small child. After federal soldiers raid her house and take her pig and chickens, they pay a heavy price. Inman follows them, and extracts brutal revenge and returns the chickens and pig to the widow.

Alternate chapters focus on Ada struggling against all odds at her farm near Cold Mountain to hold things together after her father’s death. The rough mountain girl Ruby’s arrival to help is memorable. She grabs the rooster that has been attacking Ada, wrings its neck, and cooks him for supper.

The superstitious Ruby gives us a picture of farm life 150 years ago. Frazier writes, “The crops were growing well, largely, Ruby claimed, because they had been planted, at her insistence, in strict accordance with the signs. In Ruby’s mind, everything — setting fence posts, making sauerkraut, killing hogs — fell under the rule of the heavens…November, will kill a hog in the growing of the moon, for if we don’t the meat will lack grease and pork chops will cup up in the pan.”

Frazier makes violent death compelling, beautifully and brutally awful. Battlefield horror at Fredericksburg, Inman’s dispatching of the treacherous owner of the house of ill repute, and the cruel murders by the home guard, spilt blood on “Cold Mountain’s” pages. “Cold Mountain” is full of chilling reminders of the senseless killing that becomes a part of every war.

Pick up your copy of “Cold Mountain,” pick a spot at random and read 20 pages. There will be a problem. Once you get started, you won’t be able to stop.

Today’s guest is Kenneth Janken, author of “The Wilmington Ten Violence, Injustice, and the Rise of Black Politics in the 1970s.” Next week’s  (Aug. 27, 31) guest is Karin Zipf, author of “Bad Girls at Samarcand: Sexuality and Sterilization in a Southern Juvenile Reformatory.”