Carnival hits Vegas: Mayweather and McGregor are ready to fight 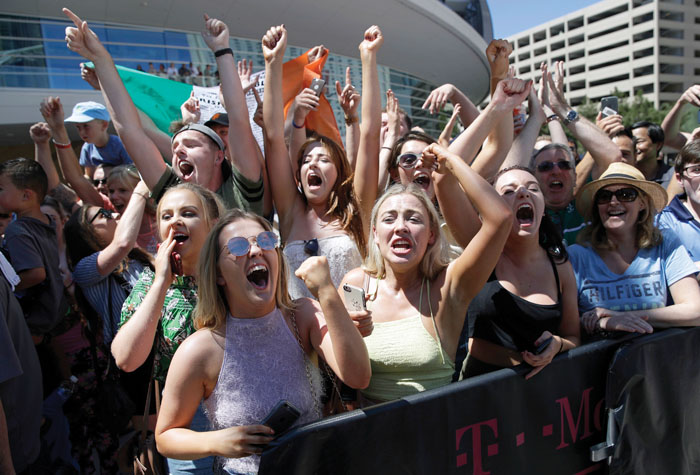 LAS VEGAS (AP) — The carnival finally hit town Tuesday, with Conor McGregor and Floyd Mayweather Jr. putting on a bit of a fashion show before promising to knock each other out in their highly anticipated boxing match.

Mayweather wore a fedora and gold rimmed glasses while McGregor sported a three-piece suit and tie and aviator sunglasses as they made separate appearances before a crowd of several hundred people in front of the arena where they will fight Saturday night.

The two got into an unplanned verbal confrontation as they moved between the outdoor stage and the arena, though it was brief. Bodyguards kept them apart and both fighters are smart enough not to do anything to jeopardize their immense paydays from what could be the richest fight ever.

“It’s work,” Mayweather said when asked if he was having fun. “My job is to be a fighter.”

McGregor, meanwhile, reiterated his vow to knock Mayweather out within two rounds, and claimed the boxer was getting desperate in making comments about his weight and stamina.

“Let him keep praying about weight and fatigue. All he’s doing is praying,” McGregor said. “But he’s praying to the new god of boxing.”

The crowd for one of the final promotional events was small and not terribly vocal, especially after waiting an hour or two in 100-degree heat to see the fighters. There was no one in line at T-Mobile Arena’s three ticket windows, where plenty of expensive tickets remain for the bout.

The big money for the two fighters will come from pay-per-view sales, and early indications are that it could break all records. Some 50 million people may watch in the United States alone, with millions more tuning in worldwide.

Estimates vary wildly, but Mayweather could pocket $200 million, while McGregor might make $100 million.

The promotion has been more circus-like than anything, but both boxers said they were serious about putting on an explosive show on fight night.

“This fight is not going to go the distance,” Mayweather said.

“I believe I’ll knock him out early, one or two rounds,” McGregor said.

Both fighters seemed relaxed and confident, just days away from a fight that seemed improbable at times and impossible at other times. Yet they will meet under boxing rules in a scheduled 12-round fight that matches a UFC champion who has never boxed professionally against the master defensive fighter of his time.

McGregor said it was just another progression in his fighting career, and chided Mayweather for saying he hopes the referee does his job and doesn’t allow McGregor to try any mixed martial arts moves against him.

“I may make him beg me to follow the rules,” McGregor said.

Mayweather said he expected McGregor to come out wildly and use roughhouse tactics, something Marcos Maidana did effectively when he fought Mayweather in 2014. But he said the Irish fighter can’t keep that up for 12 rounds and doesn’t understand what it is to get hit by a real boxing champion.

“When he gets hit he’ll find out it’s totally different,” Mayweather said.

While looking as fit as ever and insisting he is taking the fight seriously, Mayweather said he will be doing meet-and-greet experiences every night living up to the fight at his new strip club just off the Las Vegas Strip.

“I’ll be at the Girl Collection every day this week,” he said. “Every day.”