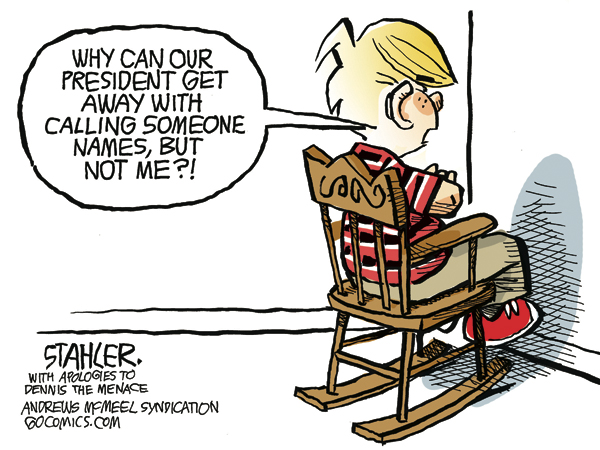 Perhaps the most astonishing thing about Donald Trump’s victory last November was that, according to exit polls, 60 percent of the voters had an unfavorable impression of Trump on the day he was elected president of the United States.

Now, it’s remarkable that after all that has happened, Trump’s favorable and unfavorable rating — not his job approval, but whether people hold a favorable or unfavorable view of him — is virtually the same as it was on election day.

Considering all that has gone on in the Trump presidency — it’s too much to recount in a sentence or two — the stability of the Trump favorable/unfavorable rating is notable.

The other measure, Trump’s job approval rating, has fallen since he took office; it was 43.8 percent in the RCP average in his first week in office and is 38.6 percent now. Pollsters and strategists believe the job approval rating — which Trump of course didn’t have before January 20 — is much more important than personal approval.

“In every model I am familiar with over the past 40 years, job approval has been a more influential predictor than a personal favorable rating and I believe that will be true for President Trump as well,” said Bill McInturff, the Republican pollster who, along with Democrat Peter Hart, conducts the Wall Street Journal-NBC poll, in an email exchange. “Long ago, presidents could have some gap between how we perceived them personally, with Carter and Reagan, for example, having stronger personal ratings than job approval at various points. An exception was President Clinton in 1998, who had terrible personal ratings, but high job approval.”

In another email exchange, David Winston, a pollster who has done extensive work for House Republicans, agreed that job approval is a more important measure than personal approval, but also noted that Trump’s polls are hard to interpret.

“Trying to compare Trump numbers with prior presidents at this point is very difficult, particularly given that he started with 60 percent unfavorable on election night,” said Winston. “He also had a significant amount of support coming from people who had an unfavorable view of him. Of the people that voted for him, 20 percent had an unfavorable view, according to the exit polls.”

Winston’s comments suggest that the old way of viewing job approval as the pre-eminent measure of a president’s performance might be lacking when it comes to Trump. But if that is true, nobody has come up with a better measure, at least not at the moment.

Even though much of the political reporting and commentary at the moment focuses on Trump’s excesses, Bill McInturff also sees something bigger than Trump at work.

A generation of change

“We are at the logical end of a generation of change in American politics,” McInturff said. “Political scientists measure polarization by the gap between how the president’s party rates a president versus the opposition party. President Clinton was the most polarizing president in polling history, followed by Bush 43, who took over the mantle of ‘most polarizing’ until replaced by President Obama, with the largest gap now being held by President Trump.”

McInturff’s conclusion: “President Trump did not begin this trend, but he has become its logical end point. Hence, it’s hard to change numbers when 85 percent of your own party likes you and functionally no one does in the other party.”

A Trump re-election campaign, if there is one, seems light years away; who knows what will happen between now and then? What is more pressing is what effect Trump’s standing will have on the 2018 midterms, where Republican prospects seem very strong in the Senate and far less so in the House. Brad Todd, a Republican strategist who has worked with many congressional candidates, believes there should be a new way of measuring the political climate.

“I think two polarizing presidencies in a row have broken this measuring stick,” Todd wrote in an email. “Job approval is more important than personal favorability, but neither is as important as what we call the gas pedal/brake pedal question.”

By “gas pedal/brake pedal,” Todd referred to whether voters believe Congress should serve as a brake on a president’s policy choices or whether lawmakers should offer more help and support to the president.

“In 2010, Obama had high personal favorables, softening job approval, and a really high brake pedal number,” Todd wrote. “That led to a landslide against his party in the mid-term. His personal favorability eventually dropped, before rising again in 2018 just as voters were rebuking his chosen successor.”

“The question to watch is not what voters think of a president personally, but whether or not they think he needs supervision or not,” Todd added.

The bottom line is that evaluating Trump’s standing is probably more complicated than simply citing a falling job approval number. This is a presidency like no other, and it should be no surprise that measuring it presents new problems.

Letter: Rededicate monument ‘in memory of all’