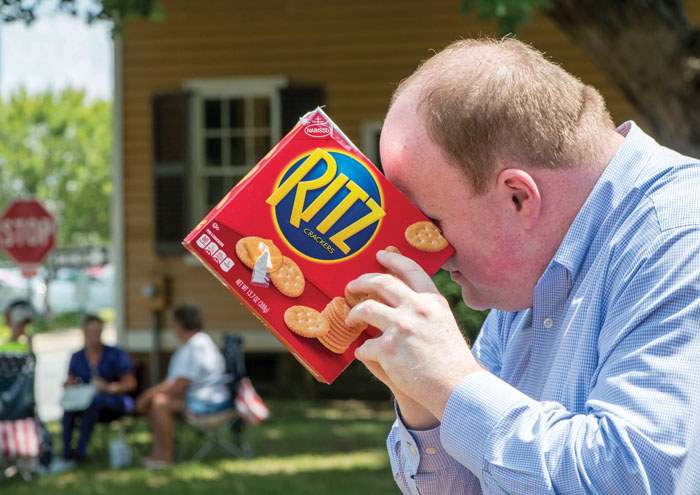 Matthew Brown uses a pin-hole viewer made out of a cracker box to view a projected image of the eclipsing sun. Eclipse viewers were scattered all over Salisbury as they gathered under the partly cloudy skies to catch a glimpse of the partial eclipse. Jon C. Lakey/Salisbury Post

GREENVILLE, S.C. — Months ago, I overheard my wife and our good friend, Nan Martin, talking about a solar eclipse Aug. 21 as being the greatest thing since granite countertops.

I was skeptical. From what I could understand, it was going to be a two- to three-minute event that I could easily appreciate on live television at best, or see the recorded highlights later that night.

But Nan is a relentless type of individual who subscribes to Discover magazine and has always alerted us to the latest comet sighting or meteor shower of the century. She loves that kind of starry-starry-night stuff, bless her heart, but why does it usually take place in the dead of winter at 3 a.m.?

Long story short, Nan booked one of the last hotel rooms available in Greenville, South Carolina, about a month ago and invited Lindsay and me to go with her. Greenville was on the solar eclipse’s “path of totality” and considered one of the 10 best places to see the total solar eclipse in the continental United States.

I guess I started recognizing there might be something to this particular solar eclipse — this kind of nationwide astronomical awesomeness hadn’t happened in 99 years — when the electronic message boards on Interstate 85 Sunday said, “Total solar eclipse/Aug. 21/Plan ahead.”

Billboards also were warning motorists not to try to watch the solar eclipse Monday while they were driving. Get off the road and find a parking lot, the billboards pleaded. Traffic was pretty heavy on the way to Greenville on Sunday, reflecting the tens of thousands who had the same idea as Nan and Lindsay and were flocking into Upstate South Carolina.

We stayed overnight at the Homewood Suites and decided with most other folks at the hotel that it would be our eclipse-watching headquarters. Greenville and surrounding area businesses were capitalizing as much as possible on the eclipse. There were watch parties, of course, at local taverns and restaurants.

You could also buy eclipse-inspired T-shirts, desserts, cocktails and tattoos. Moon Pies were understandably a hot picnic item, as were Corona (as in the sun’s corona) and Blue Moon beers. A chocolatier in Anderson, South Carolina, sold solar eclipse truffles.

A “blackout” cocktail was heavy on blackberry sour and blackberry syrup, while the “long shadow” relied on blackberries, tequila, maple syrup, lemon juice and orange bitters. As you might imagine, the Greenville News did much reporting on the eclipse, and it said Sunday that Greenville hotels were totally booked or overbooked for the eclipse.

So we felt lucky. Downstairs at breakfast Monday, we realized the distances people had traveled to see the total eclipse, not a partial one. Lindsay struck up conversations — she tends to do that — with people from Maryland, Indiana, Florida, New Jersey and North Carolina.

Grandparents from Fort Lauderdale, Florida, had met their daughter and grandchildren from New Jersey at our hotel. The whole family was wearing T-shirts that said “Totality.” Nice.

Lindsay and Nan staked out our eclipse-watching spot at the hotel pool, and they made fast friends with Skip and Michelle from Blue Ridge, Virginia, and Brad and Ginger from Charlotte. Skip had reserved a room here a year ago.

“We’re not tailgating; we’re pool-gating,” Nan said, quite proud of her play on words.

I was impressed with Skip’s preparation, even when I saw him wearing a metal colander on his head as if it were a helmet. He had spread a white sheet on the concrete in front of us, and as the moon started blocking out the sun, on the way to totality, the circular perforations of the colander became crescent-shaped shadows on the sheet.

Later, we would also notice crescent shapes on the sidewalks where partial-eclipsed sunlight was being filtered by the trees.

The hotel had its own little party for the guests, complete with hot dogs, draft beer, Milky Ways, Starburst candy, Moon Rocks and Cosmic Brownies. A lawn next to the parking lot was filled with cameras on tripods and at least one serious telescope pointed toward the sun.

Lindsay and Nan told me weird things would happen when totality arrived. Ants freeze (motion-wise), they said. “You guys are making this up,” I protested.

“No!” they shouted in unison.

“Oh, that is just awesome,” Nan said. “This is beyond cool.”

The next hour and a half until totality arrived is a blur. Every few minutes, we looked upward to see the moon’s progress in blotting out the sun. That was beautiful in itself. The puffy clouds that had been evident earlier disappeared, and totality happened amid a clear sky.

Totality came at 2:38 p.m. Our solar glasses came off. There were gasps at the sight above. Some applause. A few tears. It was, of course, dark. I could see Venus, a few stars and the blinking lights of a passenger jet.

Skip heard crickets. Nan spotted a confused bat. I can’t tell you if the ants froze or not. “We’ve seen a thousand pictures of it,” Skip said, “but until you see it … ” His voice trailed off.

The most spectacular moment for me came a little bit after 2:40 p.m. just as the sun was brilliantly peeking out again from the moon’s shadow.

Ginger had a hand-held device that measures heat and humidity. From the time the moon’s umbra began eating away at the sun until totality, the temperature dropped 20 degrees. It was amazing, we all decided as the skies brightened again, how much light the sun can generate even when mostly blotted out.

Totality had happened, and it was worth it. We hated to say goodbye to our new friends. Michelle delivered hugs to everyone — she’s a hugger — and she and Skip headed for their car and a long, traffic-snarled trip home.

Humans feel a connection when heavenly spectacles such as this happen. I came back to earth when a kid in the swimming pool behind me shouted, “Cannonball!”