“Once in a lifetime”: Salisbury residents take part in celestial fun 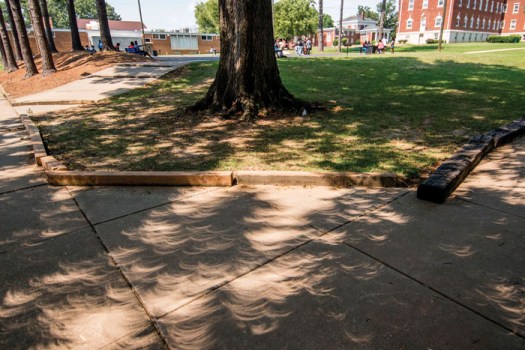 JON C. LAKEY / SALISBURY POST The shafts of light coming through the trees makes a cresent shape on the sidewalk during the height of the eclipse on the Livingstone College campus. Eclipse viewers were scattered all over Salisbury as they gathered under the partly cloudy skies to catch a glimpse of the partial eclipse. Monday, August 21, 2017, in Salisbury, N.C. 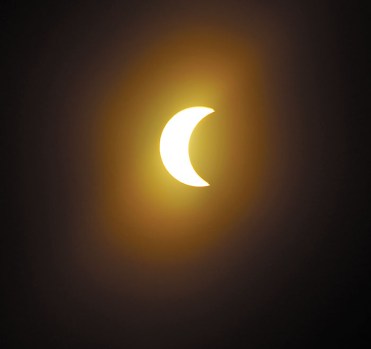 the particial eclipse about half way toward the 96 % total eclipse in Salisbury. Changing exposure gives a lighter glow around the sun. photo by Wayne Hinshaw, for the Salisbury Post 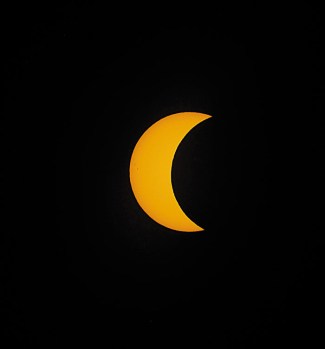 the particial eclipse about half way toward the 96 % total eclipse in Salisbury. Changing exposure gives a lighter glow around the sun or turn the glow into black through a solar filter.. photo by Wayne Hinshaw, for the Salisbury Post 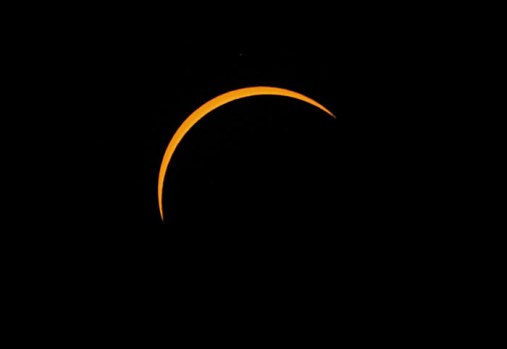 Here in Salisbury this is the total particial eclipse that we could see at about 96% of the a total eclipse.. photo by Wayne Hinshaw, for the Salisbury Post 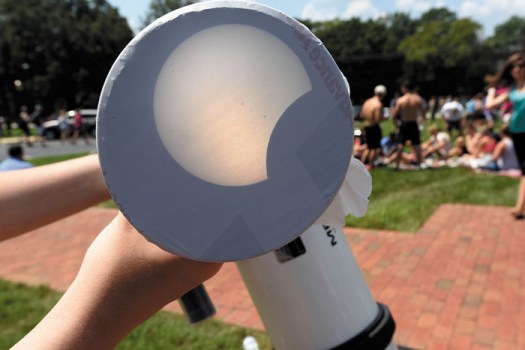 The shadow on this telescope shows the particial eclipse in the early stages at Catawba. photo by Wayne Hinshaw, for the Salisbury Post 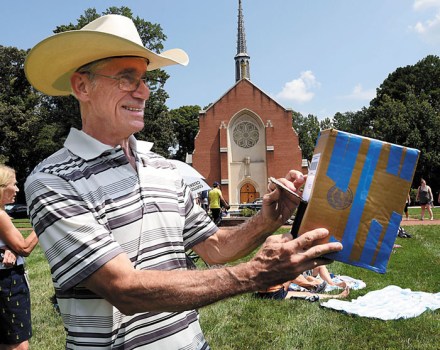 Ernie McDermon recently moved to Salisbury from Atlanta. He came to Catawba with his pin hole camers to watch the eclipse shadow in the cardboard box. photo by Wayne Hinshaw, for the Salisbury Post 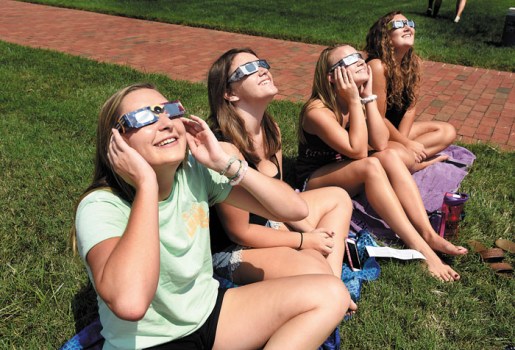 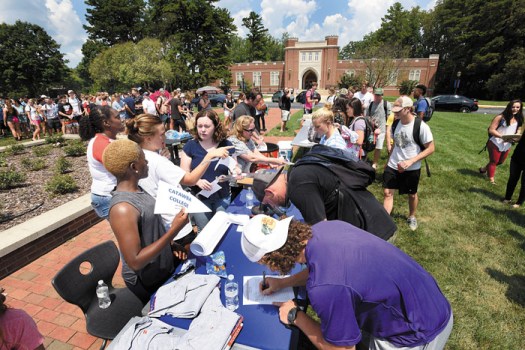 Catawba students up to get their solar glass to watch the particial eclipse at the Solar Eclipse Party on campus. photo by Wayne Hinshaw, for the Salisbury Post 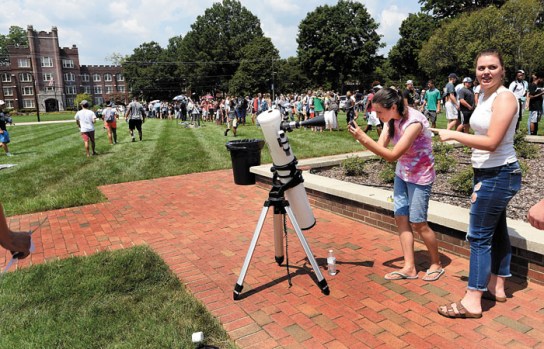 Catawba students Hanna Przelomski and Accola Hudson line up a telescope to watch the shadow of the particial eclipse at the Solar Eclipse Party on campus. They are officers in the America Chemical Society who helped sponsor the event. photo by Wayne Hinshaw, for the Salisbury Post 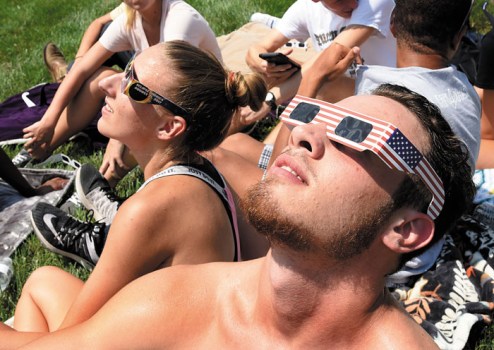 Catawba students, Nikkita Elmimonski and AJ Meadows from Kannapolis, wearing solar glasses and sitting on blankets on the Chapel lawn look up the particial eclipse at the Solar Eclipse Party on campus. It was a good time to work on their suntan as well. Wayne Hinshaw, for the Salisbury Post

It wasn’t anywhere near the total dark that others in the direct path of the solar eclipse experienced Monday afternoon. Rowan County was not in the path of totality, meaning that residents here saw only a 96 percent eclipse of the sun.

Instead, as Freeze described it, there was a sort of purple, “mystical” light that fell over Catawba College’s chapel lawn when the sun’s rays were blocked almost entirely by the moon at 2:42 p.m.

Freeze, who saw a previous eclipse in 1970, said he chose to not look at the sun through special protective lenses that day.

“Instead,” he said as he gestured toward the 500 or so people gathered on the lawn, “I’m looking at this.”

Nearly 560 people gathered to for the eclipse at Catawba, which sent an email to students and staff members nearly a week ago telling them that glasses would be provided.

Many stores had run out of protective glasses days before, making the protective eyeware a sought-after commodity.

Although some stood in line to get glasses and then went to watch the eclipse elsewhere, chemistry professor and organizer ChaMarra Saner said the viewing was meant to give people who couldn’t leave Salisbury the chance to experience the eclipse in their community.

Saner is the faculty adviser for the Catawba chapter of the American Chemical Society. She said that in addition to being excited that her students would get to see science in action, she was excited to share the eclipse with her two nieces.

“I think it’s important that they understand the magnitude of what they’re going to be experiencing,” she said. “I think it’s awesome.”

In addition to protective glasses, the school also provided eclipse-themed snacks — Sun Chips, Starburst and Sunny Delight — and a presentation by Freeze about the historical significance of eclipses.

“By knowing how this works,” Freeze said near the end of his speech, “you have learned the wonder of what you don’t know. And if you get that, then you get Catawba and you get why you’re here.”

Many of the students in attendance had their afternoon classes canceled so that both they and their professors could see the eclipse. JON C. LAKEY / SALISBURY POST Students and community members watch the eclipse on a solar viewer at the Walls Center on the Livingstone College campus. Eclipse viewers were scattered all over Salisbury as they gathered under the partly cloudy skies to catch a glimpse of the partial eclipse. Monday, August 21, 2017, in Salisbury, N.C.

“They canceled my 1 o’clock class because she said she was going to be out here,” said Catawba junior Joey Monfort. “She told me she was looking forward to seeing the class out here and hopefully they take advantage of coming to such an event.”

Many students, including Monfort and senior Brandon Floyd, waited in line on the lawn for nearly half an hour to get a pair of protective glasses.

Floyd said it was worth the wait.

“I got my glasses and, as soon as I got them, I tried them on. I looked up at the sun,” he said. “This whole week has built up the solar eclipse and everything.”

Floyd said that although he was excited to view the eclipse itself, he was particularly excited to take in the sight with his peers around him.

“All of us experiencing this once-in-a-lifetime opportunity of seeing this, just, like, being around each other (for) something so great, bringing us all together. … I just feel like it’s awesome,” he said.

Rowan-Cabarrus held an eclipse viewing party on its north campus that included a balloon release, music and food.

The next total eclipse in the U.S. will be in 2024, but North Carolina will not be near the path of totality. The path of that eclipse is from Texas to Maine.