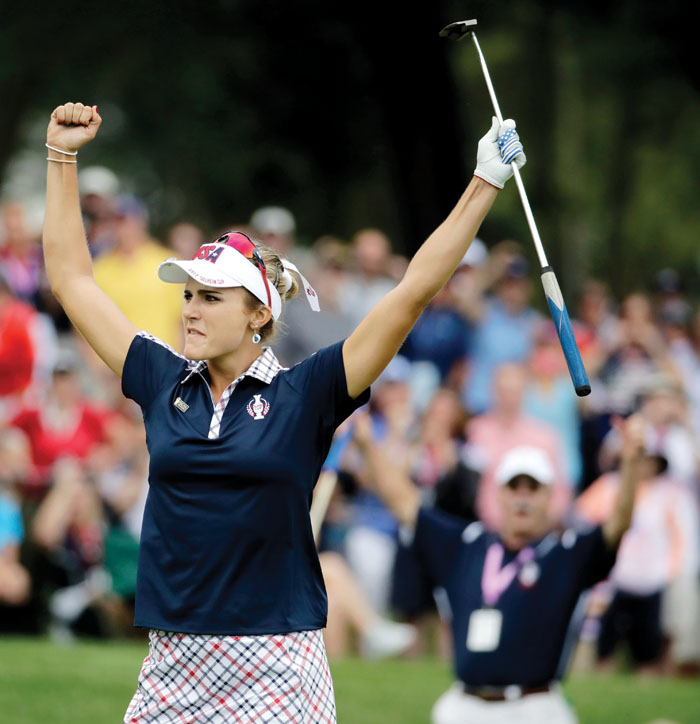 WEST DES MOINES, Iowa (AP) — Lexi Thompson set the tone by rallying from four holes down. The rest of the Americans took it from there and restored their dominance in the Solheim Cup

Her U.S. teammates followed her lead and the Americans finished off their most-decisive Solheim Cup victory in over 20 years, beating Europe 16 1/2-11 1/2 on Sunday at Des Moines Golf and Country Club.

Cristie Kerr and Paula Creamer won key matches, and Gerina Piller sealed it with a birdie putt that put her 3 up over Florentyna Parker with three to play in a 4-and-2 victory.

“They just bonded. They believed in each other. They played for the person behind them and in front of them. And they played some amazing golf,” said Juli Inkster, who joined Judy Rankin as the only U.S. captains to win the Solheim Cup twice.

The Americans are 10-5 in the biennial tournament after their biggest win since a 17-11 triumph in 1996 in Wales. They rallied to win in Germany in 2015, and have taken five of the last seven matches.

Kerr beat Mel Reid 2 and 1 for her record-extending 21st point in the competition, and Creamer edged Georgia Hall 1 up to raise her total to 19 1/2 — second on the U.S. career list.

Thompson ended up halving with Anna Nordqvist, and Angel Yin halved with Karine Icher as the teams split the 12 singles matches.  Lizette Salas and Danielle Kang also won for the U.S. Salas edged Jodi Ewart Shadoff 1 up, and Kang beat Emily Pedersen 3 and 1.

“We just got outplayed, no doubt about it,” European captain Annika Sorenstam said. “I’m just so proud of how hard they fought. What can I say? Just congratulate the USA because they played some awesome golf.”

Her team five points down entering the day, Sorenstam tried to keep the mood light by dressing up in a blue and yellow Viking hat and wig and dancing for the cameras before play began.

Nordqvist did her best to set the tone for the Europeans in the opening match, winning the first four holes.

But after a birdie on No. 10, Thompson holed out from 112 yards for eagle on the 11th hole — a shot so impressive that even Nordqvist was compelled to high-five her.

The 22-year-old Thompson followed with an eagle putt on the 15th hole, and a birdie on 16 put her ahead for the first time. Though Nordqvist rallied, earning the half-point by sticking her 154-yard approach on No. 18 within a foot, an American win was inevitable after Thompson’s run.

“To me, that was like six points,” Inkster said. “It’s probably fitting they both got half a point. Both played amazingly. It just shows the heart of her and her determination. You think she’s out of it and then the switch goes off.”

Nordqvist went 3-0-1 during the week to lead the Europeans.

Creamer was 3-1 filling in for the injured Jessica Korda, matching Kang and Salas for the top U.S. records. Creamer kept her celebration muted following Hall’s missed 4-foot par putt on the 18th hole. But this was a huge bounce back event for Creamer after her recent struggles kept her off the U.S. roster until Korda got hurt.

“For Juli to play me four matches, you know — I knew my game was there, but obviously it didn’t look like it was,” Creamer said.

The 47-year-old Matthew was 3-1 after replacing the injured Suzann Pettersen.

LOS ANGELES (AP) — Doc Redman stood over a 60-foot eagle putt on the 35th hole of the U.S. Amateur final, his hand in his pocket as usual. One hole earlier, he missed a 4-footer to fall two holes behind with two to play, and his championship chances probably rested on this long, tricky shot.

And if the 19-year-old sophomore from Clemson felt even a bit of that pressure, Redman never showed it while he holed that daunting putt and made an incredible comeback to win.

Redman rallied past Doug Ghim and won on the first extra hole Sunday, claiming the Havemeyer Trophy in the 117th edition of the Amateur.

After Redman gave away his own lead with eight holes to play, Ghim was on the verge of victory with two holes left in the two-round final at Riviera Country Club. But Redman capped his phenomenal putting day by making that 60-footer and following with a short, tricky birdie putt on the 36th hole to force overtime.

“I always have a lot of confidence from mid-range,” said Redman, who puts his hand in his pocket before his stroke as part of his putting routine. “When I see one go in, I definitely get big eyes and I know I can make anything.”

Ghim put his tee shot in the rough and his second shot in the sand on the extra hole — Riviera’s famed 10th. After Ghim’s bogey putt missed, he conceded the hole and the title to Redman.

“It was a chess match, except your golf ball isn’t moving like a pawn should on the board,” Ghim said.

The 62nd-seeded Redman followed a thoroughly improbable route to become the second Clemson player to win the Amateur after Chris Patton in 1989. The Raleigh native had a solid freshman year with the Tigers and reached the final of the Western Amateur, but gave little suggestion he was ready to make history at Riviera.