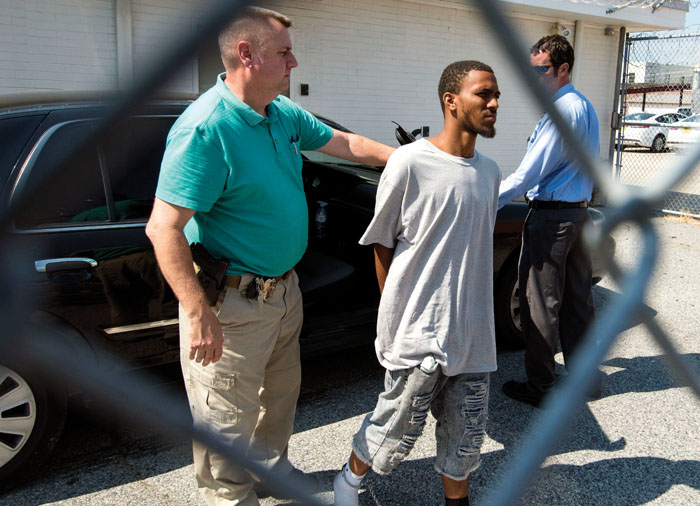 Malik Johnson, 21, has been arrested for the Aug. 12 murder of Jeffrey Ramsey Jr. that occurred in the parking lot of 3 Stars Mini Mart. Jon C. Lakey/Salisbury Post

SALISBURY — Police have arrested an East Spencer man wanted in the murder of Jeffrey Allen Ramsey Jr., who was shot and killed in the parking lot of Three Stars Mini Mart near Henderson High School.

Salisbury police detectives brought Malik Eric Johnson, 21, to the Rowan County Magistrate’s Office on Monday hours after receiving information that he was at home in Spencer. Police had been looking for Johnson since the Aug. 12 shooting.

Johnson was charged with first-degree murder and robbery with a dangerous weapon.

The Salisbury Police Department, State Bureau of Investigation and Spencer Police Department all responded to 112 Springhill Drive in Spencer on Monday and surrounded the residence. Authorities said they made contact with Johnson and, after a short time, he came out of the residence and was taken into custody.

When asked for comment outside the magistrate’s office, Johnson turned to a Post reporter and said, “I’m sorry.”

According to an arrest warrant, Johnson is accused of taking a black bag that is believed to have contained additional property of the victim.

Jeffrey Ramsey was taken to Novant Health Rowan Medical Center by a private vehicle. When police officers arrived at the hospital, they discovered that Ramsey and the driver of the vehicle had met Johnson in the parking lot of the store, 1126 N. Main St. An argument ensued, and Ramsey was shot once in the chest. He died shortly after arriving at the hospital.

This is the ninth murder in Rowan County since January and the eighth in the city of Salisbury. Ramsey’s death comes on the heels of the July 31 shooting death of 21-year-old Shawn Spry, who was found lying on the ground outside a South Link Avenue apartment building. On Aug. 15, the man accused of shooting Spry, Joseph Whitmire, turned himself in to authorities.

Police arrested Zakelo Duren, 23, and Jalen Lamont Cook, also 23, for their involvement in the July 29 shooting deaths of Anthony Gill and Daquan Robertson in downtown Salisbury. Authorities said Duren turned himself in on Aug. 1 and was charged with inciting a riot.

Cook was apprehended after a short vehicle chase. Cook was charged with murder and assault with a deadly weapon with intent to kill inflicting serious injury.

Johnson was denied bond and is expected to have a first court appearance Tuesday.

Eclipse excitement: Millions converge across US to see sun…