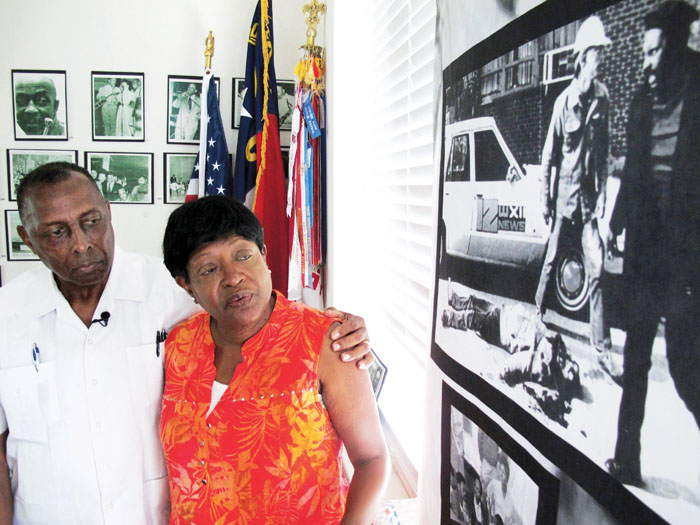 In this Aug. 16, 2017 photo, the Rev. Nelson Johnson and his wife, Joyce, stand beside a 1979 photo of the "Greensboro Massacre" at the couple's Faith Community Church in Greensboro, N.C. The Johnsons were taking part in a workers' march on Nov. 3, 1979, when they were attacked by Nazis and members of the Ku Klux Klan. (AP Photo/Allen G. Breed)

GREENSBORO — The Rev. Nelson Johnson needs no reminders of the massacre of five of his labor-activist friends almost 40 years ago — he still has the faded scar on his left arm, left by a Nazi who stabbed him as white supremacists descended on a march for workers through black neighborhoods in Greensboro.

But the violence surrounding the Aug. 12 march by Ku Klux Klansmen and Nazis in Charlottesville, Virginia, and the death of a young woman hit by a car there, brought the events of Nov. 3, 1979, in sharper focus for him.

“I was horrified,” he said.

Johnson, now 74, was a member of the Workers Viewpoint Organization, which planned a march through a public housing project in Greensboro before a labor conference on Nov. 3, 1979. While the focus was on workers, textile mill wages and brown lung disease, it was also billed as a “Death to the Klan” rally. Both the rally title and the organization’s decision to rename itself the Communist Workers Party were mistakes, Johnson now acknowledges.

Nazis and Ku Klux Klansmen drove into the march and then fired at demonstrators, and a report found that some demonstrators also were armed and fired in response. Five marchers were killed and at least 10 people were wounded, including Johnson. All-white juries at two trials acquitted the Klan and Nazi members, who claimed self-defense. Testimony showed both the police and the then-Bureau of Alcohol, Tobacco and Firearms had been warned by informants about the Klan-Nazi plans.

Members of the Greensboro Police Department, along with Klan and Nazi members, were found liable at a civil trial for the death of one victim, and the city paid $351,000 to his family. The details were outlined in a report , completed in 2006 by the Greensboro Truth and Reconciliation Commission.

A Nazi knifed Johnson’s left arm, which Johnson had used defensively to prevent a more serious wound to his abdomen. A light scar, faded over 38 years, is barely visible, and Johnson can’t move one finger because of where the knife sliced a muscle.

Early reports described the attack as an ambush, but the narrative changed quickly from that to one of equivalent blame for the marchers and the killers — similar to what President Donald Trump said this week about Charlottesville.

“To hear our president frame the issue this way was frighteningly familiar,” Johnson said.

Still, he’s optimistic about the public response and that of local and state leaders to the Charlottesville protest and death, compared to the way officials reacted in Greensboro in 1979.

“The response was much different,” he said. “The mayor, the governor, the leaders of Charlottesville all quickly came to the defense of those who were brutalized and abused. Nothing approximating that happened in Greensboro. And we were quickly isolated and alone.”

Death threats led Johnson and his family to move from their house in the woods on the edge of the city to a home with several other families. He couldn’t find a job. About 20 pro-labor protesters who had jobs in the Greensboro area were fired and left town, he said.

The attack came at a time when the WVO was “building the strongest black unity in the history of Greensboro,” Johnson said. It destroyed the CWP, which changed its name once again before folding.

“If somebody could have told me that I would have become a pariah in this city, I just wouldn’t have believed it,” he said. While listening to a radio show, he heard callers say that his death would have been the best outcome of the Greensboro massacre.

It has taken four decades, but attitudes in Greensboro are changing. In 2015, the state placed a highway marker near the site of the march and titled it “Greensboro Massacre,” a word that even the truth and reconciliation report had avoided. And last week, spurred by the Charlottesville violence, the Greensboro City Council officially apologized.

Change can be painful, Johnson said, but he’s convinced it is coming.

Rivers, Johnson said, have power to alter the landscape.

“And that’s what I think this period is calling us to,” he said. “There are a lot of rivers in the last few years. The Dallas river. The Charlotte river. And you could go on for a while. How do we take those struggles, where that unearned suffering becomes redemptive and becomes part of a stream building a mighty river of transformation? I see this sign here as a symbol of that.”