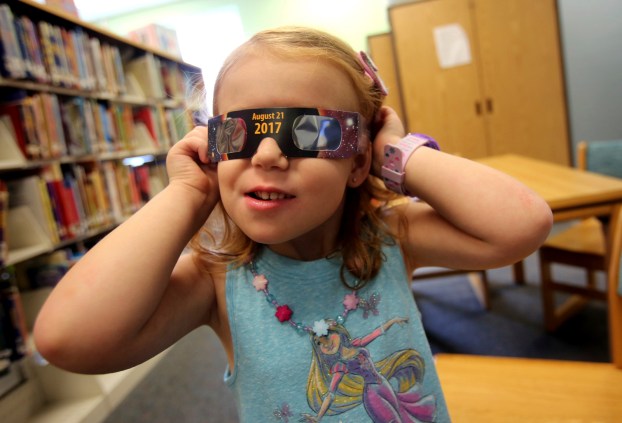 n this Wednesday, Aug. 2, 2017 file photo, Emmalyn Johnson, 3, tries on her free pair of eclipse glasses at Mauney Memorial Library in Kings Mountain, N.C. Glasses are being given away at the library for free while supplies last ahead of the big event on Aug. 21. (Brittany Randolph/The Star via AP)

Editorial: We interrupt this news …

Monday’s rare total eclipse had millions of Americans looking skyward for a change, a welcome break from our daily routines.

For a few hours, politics and protests faded into the shadows as people positioned themselves to take in the rare sight of the moon blotting out the sun. The Associated Press called it the most-observed and most-photographed eclipse in history, and who can argue with that?

The hype and hoopla may have seemed disproportionate to the duration of the eclipse. (How much money would you guess was spent on eclipse glasses?) You’d be hard-pressed to find anyone complaining about that, though. For a brief moment, divisions and distractions gave way to the shared experience of watching heavenly bodies. It was better than the Super Bowl; everyone won.

Locally, hundreds of people gathered at eclipse-watching events at colleges and Rowan Public Library. One group not gathering here to watch the eclipse was the Astronomical Society of Rowan County. A note on the group’s Facebook page said most members were heading out of state to view the eclipse in totality. A 96 percent eclipse was not good enough.

You might want to hold on to those eclipse glasses. The next total eclipse is less than seven years away on April 8, 2024. Its path will go from from Texas to Maine, farther removed from North Carolina. That eclipse will be visible in several major cities, including Dallas; Little Rock, Arkansas; Indianapolis; Cleveland; Buffalo, New York; and Montreal. Start making travel plans now.

My Turn: Gemale A. Black — Silenced citizen deserves an apology

In response to Carolyn Logan being escorted from a City Council meeting: Amid the wake of the insidious rhetoric of... read more