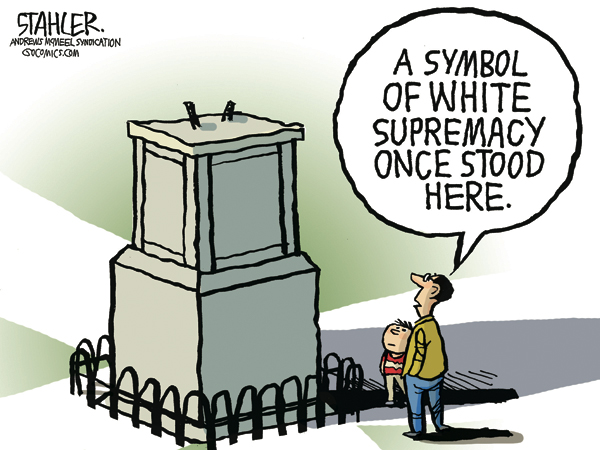 RALEIGH — The days of North Carolina’s many Confederate monuments could be numbered after Gov. Roy Cooper declared war on them — just one day after he chastised protesters who toppled a monument in Durham.

The governor’s announcement that the monuments “should come down” came as a surprise because a 2015 law bans Cooper and local governments from taking down monuments and historical “objects of remembrance.” UNC-Chapel Hill’s Silent Sam and his lesser-known brothers will stay put unless the legislature votes in favor of change.

Cooper called on legislators to repeal the law, and typically such requests from the Democrat prompt a quick jab in response from Republican lawmakers. Not this time. For two days, reporters’ requests for a comment from House Speaker Tim Moore and Senate leader Phil Berger went unanswered.

Berger broke his silence by releasing a lengthy op-ed article, carefully choosing his words to avoid being too inflammatory (President Donald Trump could learn a thing or two from Berger’s approach). The Republican from Rockingham County took the customary swipe at Cooper for being “reactionary and divisive,” but he also made clear that “the white supremacy movement has no place in America.”

As for monument removal, Berger’s article doesn’t appear to rule out the possibility entirely. Senators, he said, “would be hesitant to begin erasing our state and country’s history by replacing that process with a unilateral removal of all monuments with no public discourse.”

But what about a case-by-case removal of monuments by local governments after public hearings? What about moving the monuments to a museum rather than melting them down into scrap metal? Those options could be the seeds of a potential compromise, particularly if the trend of monument removal continues to grow across the country.

In the House, Moore avoided reporters’ questions all week, but one of his top lieutenants, Rep. David Lewis, R-Harnett, made similarly measured comments. Lewis said he had “not heard of a conversation to revisit” the 2015 monument removal ban, but that legislators “continue to have some conversations with the governor on that subject.”

Moderate state Sen. Jeff Tarte, R-Mecklenburg, told the Charlotte Observer it’s “absolutely a conversation that we have to have.”

Public opinion on the monument issue seems to have shifted dramatically since the ban passed the Senate unanimously in April 2015. Even the most liberal Democrats voted yes. But by the time the bill reached the House floor three months later, the vote was split along party lines. During that debate, an African-American legislator said the timing of the bill was “disrespectful” to the victims of the Charleston church shooting, which had happened only a few weeks before.

Supporters of the bill noted that lawmakers could still propose legislation that would remove individual monuments at the request of local leaders. But in the two years the law has been on the books, no one has filed a monument removal bill.

That’s likely to change. Beyond the state’s liberal enclaves like Durham, residents of smaller towns like Rocky Mount and Windsor have approached their local leaders this month about removing monuments there.

Local monument bills will leave legislative leaders with a choice: Give city councils and county commissions the power to make change in their communities, or accept that the protests and divisive debates will occur one-by-one at the General Assembly.

And even if lawmakers decided to back Cooper’s position, plenty of questions remain unanswered about what would happen next. Cooper’s office doesn’t yet have a list of which monuments the governor is interested in removing.

Sure, there’s the obvious ones like the tall “To Our Confederate Dead” memorial that looms over the state Capitol, but what about the individual statues of men who fought for the Confederacy? Many of them, like post-Civil War Gov. Zebulon Vance, also represent other aspects of the state’s history. And then there’s the statue of Gov. Charles B. Aycock, a white supremacist who was only a child during the Civil War.

It’s a difficult subject without easy answers, but the tumultuous week following the white supremacist violence in Charlottesville, Va., shows the topic isn’t going away.