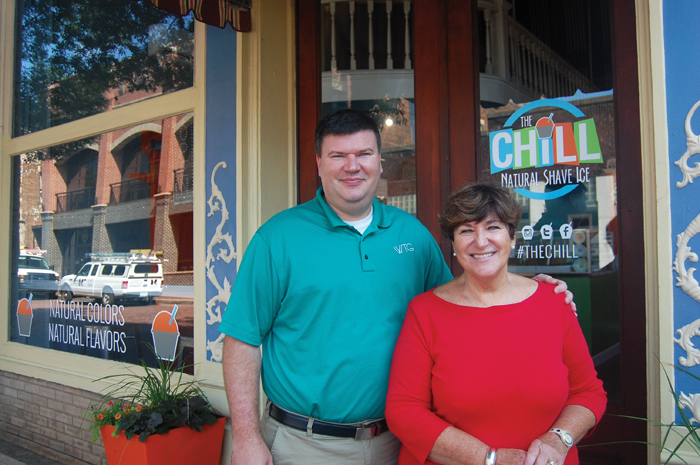 Brad Walser and his mother, Suzanne Walser Jones, stand in front of The Chill, their new shave ice store. The store is located at 120 E. Fisher St. (Jessica Coates/Salisbury Post)

SALISBURY — Brad Walser said the idea for The Chill first came from his three children.

“They really enjoyed shave ice and when the Frost Bites (which served flavored ice) went out of business…this was, I guess, three or four years ago? They were really upset,” Brad said. “And they wanted to know if we could open (this), because they loved going there after school.”

Brad said that idea stuck with him for several years. But it wasn’t until his mother, Suzanne Walser Jones, retired from the hospitality industry that he seriously considered it.

Brad is the founder and owner of the Walser Technology Group and said that he doesn’t plan to step away from that role to work at The Chill. That’s why it was important that Suzanne be available to direct the store’s day-to-day operations.

“My background is marketing for hotels. I was in corporate sales and marketing,” Suzanne said. “So all of those marketing efforts from my hotel years, I hope, will work towards a positive for this.”

Suzanne and Brad said that the store has a lot of things to market.

Suzanne pointed to one word in particular that stood out to her on their logo, which reads “The Chill Natural Shave Ice.”

“We start with 100 percent organic sugar, filtered water and then our flavors are all natural. And that’s what sets us apart. This one word,” she said as she pointed to the word “natural” on their logo, “sets us apart from all of the other shave ice places around.”

She mentioned something that had happened in the last few weeks. A little boy came in and asked for blue razzleberry, a flavor that is normally a bright blue color.

When Suzanne made it for him with their all-natural syrup, which more closely resembled a light green color, the boy was confused.

Brad said that, in addition to being healthier, the syrups also use plant-based dyes, which don’t stain faces or clothes.

This idea of cleanliness and kid-friendliness is continued through the décor of The Chill’s main store, which is located at 120 E. Fisher St.

The set-up and color scheme of the store — which was designed by Brad’s wife, Dana, a former interior designer — is bright with modern, clean lines.

Other members of the Walser family also got to put their own touches on the store.

Suzanne said the store really is a “family affair.”

“It’s a fun place. We always have music going. You know, our colors convey that,” Suzanne said. “We’ve had grandmothers come in and bring their grandkids and they stay for hours. So it’s kind of a little hang out.”

Because of Brad’s technological background, the store is also updated with several high-tech features.

The store’s menu is displayed on one of two TVs mounted behind the register, while the other TV has rotating images that show social media posts mentioning The Chill.

“So if we have any pets,” Brad said, “they’re welcome to come up here and we can serve them a doggie chill.”

In addition to the East Fisher Street store, The Chill has a seasonal kiosk, which is located in the parking lot of Moose Pharmacy at 1408 W. Innes St.

Suzanne also said that the store would soon have a mobile unit, which she is hoping to be able to bring to corporate events and private parties.

“We’re all about getting our name out there and having people come by,” Suzanne said.