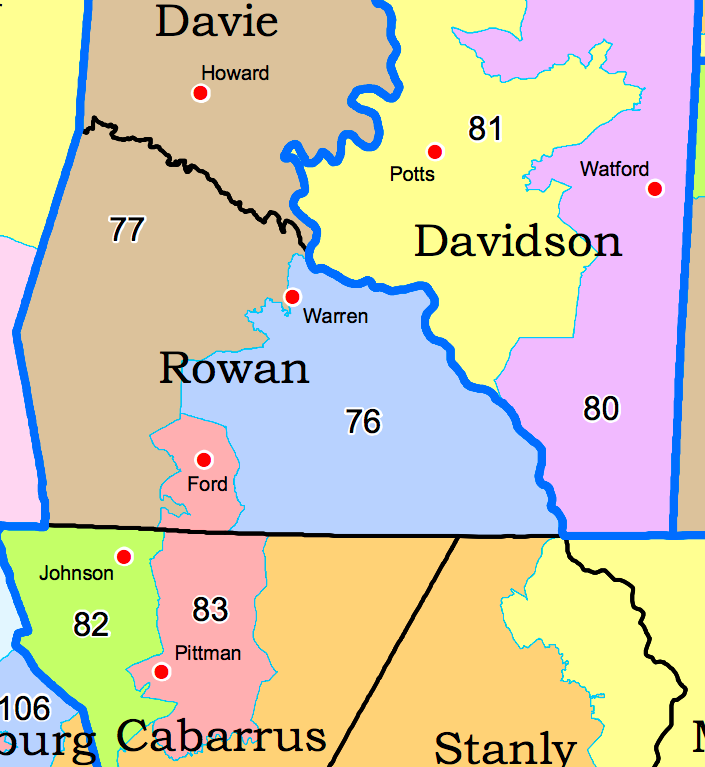 Maps posted on Saturday show Reps. Ford and Pittman could be placed in the same district in 2018.

SALISBURY — If newly introduced maps hold up, Rep. Carl Ford could face another Republican incumbent in a bid for re-election to the N.C. House.

The N.C. General Assembly posted maps on Saturday that attempt to comply with a federal court ruling that 19 N.C. House districts and nine state Senate districts are racial gerrymanders. In the legislature’s effort to comply with court-ordered redistricting, however, Ford and Rep. Larry Pittman could be double-bunked — with the two incumbents placed in the same district. Newly posted maps show Ford, a Republican who currently represents the 76th District, in the same district as Pittman, a Republican who currently represents the 82nd District.

Unless a special election is ordered, the maps would take effect for the 2018 elections.

Asked about being double-bunked, Ford said that the committee charged with redrawing N.C. House districts did the best it could. Ford noted that he and Pittman aren’t the only incumbents placed in the same district. He stressed that maps aren’t final. Tweaks can be made, he said.

The district containing Ford and Pittman is the 83rd. Currently, it starts at the Rowan-Cabarrus line. It snakes through Kannapolis and Concord until reaching Cabarrus County’s southernmost tip.

In the new maps, the 83rd District starts in the China Grove area and extends into parts of Concord.

Faced with the possibility of running against a Republican colleague, Pittman or Ford could decide not to run for another term in the N.C. House, run for another office or not run for office at all.

Just before the N.C. General Assembly released its maps, Ford said he received a call from Rep. David Lewis, chairman of the redistricting and rules committees. During that call, Ford said he was told it wasn’t possible to draw districts in Rowan County’s area without double-bunking some legislators.

Ford and Pittman were double-bunked because they have served the fewest terms of anyone in Rowan County’s area, Ford said.

Meanwhile, Rep. Harry Warren would be moved to a slightly reconfigured 76th District. If he ran for re-election and won, he would represent a number of new voters.

Warren’s current district — the 77th — would be represented by Rep. Julia Howard, a Republican from Davie County.

Neither Warren nor Howard would be double-bunked, but both could gain a large number of new constituents. Howard would continue to represent the entirety of Davie County.

Warren’s new district — the 76th — would contain all of eastern Rowan and some southern parts of the county, according to maps posted Saturday. The district also would contain East Spencer, Granite Quarry, Spencer and parts of Salisbury.

In addition to Davie County, Howard’s new district would include some voting precincts immediately outside of Salisbury’s city limits. If she ran for re-election, Howard would also represent most of western Rowan County — including the Cleveland, Mt. Ulla and Woodleaf areas. Her district would extend to the Rowan-Iredell and Rowan-Cabarrus county lines.

The maps posted Saturday are not final and will need to pass the General Assembly. The maps will also be presented to three federal judges who ruled that a number of General Assembly Districts are racial gerrymanders.

The Senate hasn’t yet released its new maps.