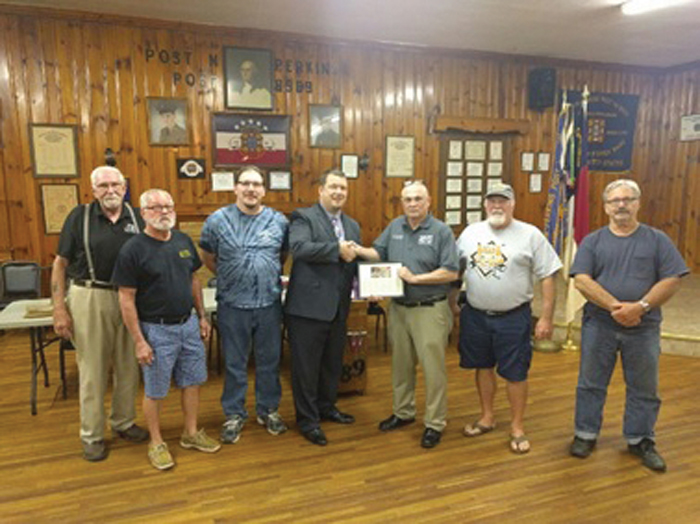 Recently, Brothers from Cannon Memorial Lodge arrived at the VFW Post 8989 in Kannapolis to show thanks and appreciation, present coffee / muffins, and to provide an award of recognition to the local Veterans of Foreign Wars post. Commander Tony Gulledge accepted the award on behalf of the VFW. Thank you to the Brothers that attended, and to French Express Coffee House in Kannapolis for cutting a deal on the muffins and coffee.

Alpha Kappa Alpha Sorority Inc. held its 2017 Leadership Seminar in Las Vegas, Nevada on July 13- July 16. For the first time ever, The Bellagio changed its renowned fountain to pink and green, in honor of the seminar.

An opening ceremony for the conference was held at the “Welcome to Fabulous Las Vegas” sign on July 13. As part of the sorority’s focus on Environmental Ownership, which allows AKA to enhance and create safe play spaces for children, the sorority unveiled a park bench at Lorenzi Park in the Festival Plaza, a noted landmark in honor of Sammy Davis Jr., an African American trailblazer and humanitarian. Members of Alpha Kappa Alpha donated more than 1,700 backpacks, 900 seasonal wraps, 4,500 toiletries, 950 supplies for seasonal wraps, and $10,195 items were purchased via a virtual grocery store.

As part of AKA’s continued partnership efforts, a seminar in collaboration with AARP featured guest speaker, Vivica A. Fox. Ms. Fox discussed reinventing her career and relationships at the age of 50. She also discussed issues concerning Alzheimer’s Awareness and caregiver support. Other guest speakers and performers during the event included Iyanla Vanzant, D.L. Hughley, Cameo, and Will Downing.

Alpha Kappa Alpha hosted its first Las Vegas based Leadership Seminar on July 9-13, 2003 under the leadership of the 26th International President, Linda Marie White. A permanent marker was installed at Craig Ranch Regional Park to commemorate this milestone.

Back to School Bash hosted by Rockwell AMVets Ladies Auxiliary

The Center for Faith and the Arts women’s retreat

The Center for Faith and the Arts welcomes you to participate in our retreat, Be-YOU-tiful, which will take place on September 15-17. The retreat kicks off with a film presented by the Catawba College Forum film series, on the evening of September 15th at 7 pm in the Tom Smith Auditorium in the Ketner center. On Saturday, September 16th, a variety of workshops will be held at the Center for Faith & the Arts. Participants will be able to self-select the workshops that are in their area of interest. Some of the workshops include journaling, yoga, creative movement, aromatherapy, nutrition, writing & painting, and more! Saturday evening will consist of a program to celebrate our beauty, which will include a performance by the ladies from Queens of D’Nile, after which we will open the floor for impromptu dancing and drumming. The retreat ends with a meditative retrospective on Sunday afternoon to process the weekend and plan strategies for inner peace and recognition of our beauty and strength, going forward.  Registration opens on August 15th.  The registration fee for the entire weekend is $50.00, which includes lunch on Saturday.  More information can be found on our website at www.faithart.org

RALEIGH — 7-8:30 p.m. Thursday, Aug. 24: Autism is a developmental disability that impacts an individual’s ability to interact with others and often results in impairment throughout life.

Current treatments, while critically important, have only modest success in ameliorating symptoms in most affected individuals. Recent studies suggest that autistic symptoms are not present in early infancy but emerge over the first two to three years of life. New research suggests that brain changes characterized by brain scans during this early period can accurately predict those children who will go on to have a later diagnosis of autism. This new research holds promise for pre-symptomatic detection and treatment during a period when the brain is most malleable and most likely to respond to intervention.

Speaker Joe Piven, MD, is professor of psychiatry and pediatrics at UNC and director of the Carolina Institute for Developmental Disabilities. He has conducted research on autism for almost 30 years. He is the principal investigator of an NIH-funded, prospective brain imaging study of infants at high risk for autism.

WINSTON-SALEM — Reynolda House Museum of American Art hosts “Georgia O’Keeffe: Living Modern,” a landmark exhibition that examines the artist’s self-crafted persona through her art, her dress, and her progressive, independent lifestyle. Reynolda House Museum of American Art is the only venue in the Southeast to host the exhibition, which is the largest ever installed by the 50-year old museum.

Georgia O’Keeffe: Living Modern will be on display at Reynolda House Museum of American Art, 2250 Reynolda Road, from Aug. 18–Nov. 19. The exhibition follows O’Keeffe’s life from a young girl in Wisconsin to a pioneer of modernism and a style icon living on the New Mexico desert.