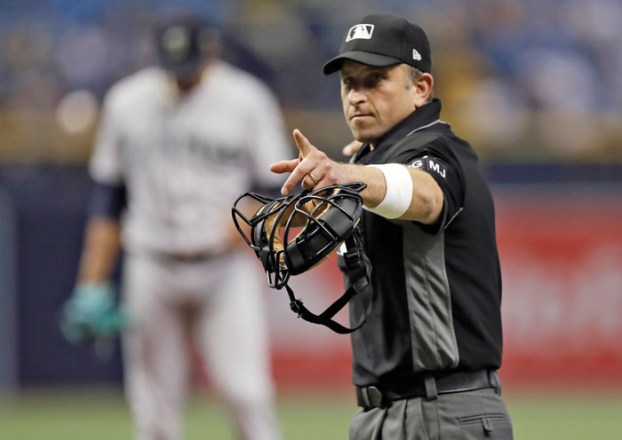 Home plate umpire Chris Guccione points to Tampa Bay Rays' Kevin Kiermaier during the first inning of a baseball game Saturday, Aug. 19, 2017, in St. Petersburg, Fla. The World Umpires Association, the union representing Major League Baseball umpires, announced that umpires will be wearing white wristbands during all games to protest the escalating verbal attacks on umpires and their strong objection to the Office of the Commissioner's response to the verbal attacks. (AP Photo/Chris O'Meara)

The World Umpires Association announced the action, saying the union strongly objected to the response by the commissioner’s office. Kinsler said this week that Hernandez was a bad umpire and “just needs to go away.”

“The Office of the Commissioner’s lenient treatment to abusive player behavior sends the wrong message to players and managers. It’s open season on umpires, and that’s bad for the game,” the WUA said.

“Enough is enough. Umpires will wear the wristbands until our concerns are taken seriously,” the union said.

Said Kinsler: “I really don’t think too deeply into it. I hope they wear the white wristbands for the rest of their careers. I don’t care. I said what I felt and what I thought. If they take offense to that, that’s their problem.”

MLB said it had no comment on the union’s statement.

Crew chiefs Joe West, Gerry Davis and Bill Miller wore the wristbands in the first games of the day. Hernandez wore one for the Arizona-Twins game.

Miller worked at second base during the Dodgers-Tigers game at Comerica Park, right near Kinsler.

“He’s not the focus of the situation. That’s just part of the puzzle,” Miller said. “We’ve have had several instances where umpires have been called out or challenged. Ejections seem to be up, and we just feel like we need to band together and let people know that we are human beings.”

Most every full-time MLB umpire wore a wristband. Triple-A call-up umps didn’t in the early games.

“That’s certainly their right to do that. I think the country’s in a mood to protest right now. That’s pretty clear,” Milwaukee manager Craig Counsell said before the Brewers played at Colorado.

“The umpires do get the brunt of it sometimes. But I also think they’re kind of trained to understand that,” he said.

West, the president of the umpires’ union, declined comment after working home plate at Wrigley Field in the Cubs’ 4-3 win over Toronto. In the fourth inning, West called strike three on Chicago’s Jon Jay — Jay yelled in frustration as he walked away from the plate.

West is the most senior umpire in the majors. Earlier this month, he was suspended three games by MLB for comments he made in a newspaper story about Texas star Adrian Beltre being the biggest complainer in the game. West said he was joking, and Beltre said he knew the umpire was kidding.

On Thursday, at the owners’ meeting in Chicago, Commissioner Rob Manfred drew a distinction on remarks by players and umpires.

“It is not unusual after a very competitive event for a player to say something that we don’t think is helpful over the long term. We have always dealt with those by player discipline, fines. That’s the ordinary course,” Manfred said.

“I see the umpire thing differently. Umpires have to be beyond reproach on the topic of impartiality. That’s why there are really specific rules in the umpire basic agreement about public comment,” he said.

On Monday, Kinsler was ejected by Hernandez in Texas after being called out on strikes. The next day, Kinsler sharply criticized Hernandez, saying the umpire was “messing” with games “blatantly.”

“No, I’m surprised at how bad an umpire he is. … I don’t know how, for as many years he’s been in the league, that he can be that bad. He needs to re-evaluate his career choice, he really does. Bottom line,” Kinsler said.

Kinsler and Hernandez shook hands on the field before the Tigers-Rangers game on Wednesday. Kinsler said Friday that he’d be fined, without disclosing the amount.

Detroit manager Brad Ausmus didn’t reveal the amount, either, but said Saturday “it’s the biggest fine I’ve ever seen Major League Baseball give a player. So I don’t want to hear — I don’t want them to minimize — that he’s not being punished.”

“The more I think about it, the more wrong I think it is,” he said, adding, “Kinsler was acting emotionally at the time. This is thought-out and planned and orchestrated.”

The union said “the verbal attack on Angel denigrated the entire MLB umpiring staff and is unacceptable.” The commissioner’s office “has failed to address this and other escalating attacks on umpires,” the union asserted.

Last month, Hernandez sued MLB alleging race discrimination. In a complaint filed in U.S. District Court in Cincinnati, the 55-year-old Hernandez, who was born in Cuba and lives in Florida, cited as evidence of alleged discrimination his lack of World Series assignments in the past decade and MLB not promoting him to crew chief.

Hernandez worked the World Series in 2002 and 2005 but hasn’t done it not since.

As for the wristbands, Toronto infielder Darwin Barney said, “whether you’re a player, an umpire, a scorekeeper, there’s two sides to everything. They are allowed to protest. Good for them.”

“I’ve said it enough, how I feel about the umpires we have in Major League Baseball. I think they’re the best,” he said. “I also believe that this game is an emotional game. It’s not always clean.”

Padres manager Andy Green said “there have been moments in time where I have said things to umpires I wish I had not said.”

“So for that I’m cognizant of why they feel that way. I’m not the only one,” he said. “It’s an interesting job. You’re crushed if you’re noticed and if you’re not noticed you get to labor in anonymity.”