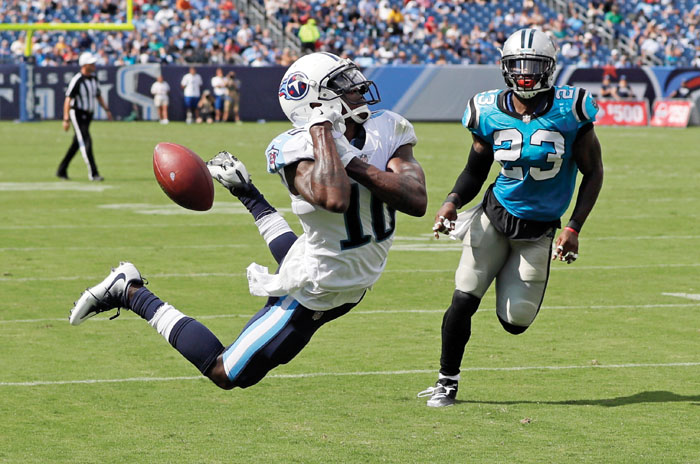 AP Photo/James Kenney Tennessee Titans wide receiver Tre McBride (10) cannot hold onto a pass in the end zone as he got past the Carolina Panthers’ cornerback, during Saturday afternoon’s NFL preseason game in Nashville. Safety L.J. McCray (23), a former Catawba College standout, comes over to help on the play. McCray was credited with five solo tackles. The Titans won, 34-27.

NASHVILLE, Tenn. (AP) — Marcus Mariota threw a touchdown pass and the Tennessee Titans earned a 34-27 preseason win over the Carolina Panthers on Saturday.

The Titans (1-1), who were held to just three points last week against the New York Jets, scored on their first three possessions against Carolina, with help from one long drive and two Panthers turnovers.

Mariota, who finished 6 of 8 for 61 yards and one touchdown, completed a 20-yard pass to rookie receiver Taywan Taylor and then added a 9-yard run on the first two plays of the game. The Titans had auctioned the first two play calls to a fan for charity.

That drive ended with Ryan Succop’s 34-yard field goal, but was just the beginning of the scoring for the Titans in the first quarter.

On the first play from scrimmage for the Panthers (1-1), Derek Anderson, playing for an injured Cam Newton for the second straight week, completed a pass to Devin Funchess, who had the ball knocked loose by cornerback Logan Ryan.

Kevin Byard recovered and returned the ball to the Carolina 13, where the Titans scored on Mariota’s 4-yard touchdown pass to Delanie Walker.

“It was a lot better (than last week),” Mariota said. “I thought we came out fast, made a couple of big plays, were able to go down and score. The defense got a huge, huge turnover.”

That was the end of the day for Mariota, but not for the Titans.

Tennessee’s defense took the ball away again on Carolina’s next possession, as Justin Staples intercepted a pass intended for tight end Greg Olsen that rookie linebacker Jayon Brown tipped into the air.

Derrick Henry then took the handoff on the first play from scrimmage and went 17 yards for a touchdown, as Tennessee built a 17-0 lead with 2:02 left in the first quarter.

“It’s a great sign. That’s what we have to have,” Titans coach Mike Mularkey said. “That’s our intent. When you’ve got a lot of guys around the ball where they’re supposed to be, good things happen, and that’s exactly what happened.”

The Panthers got on the scoreboard early in the second quarter as first-round pick Christian McCaffrey had a 17-yard touchdown run to make it 17-7.

The Titans answered with another scoring drive, with Henry scoring his second touchdown, a 1-yard run that capped a 14-play, 75-yard drive.

Carolina got a 46-yard field goal from Harrison Butker to make it 24-10. McCaffrey took a screen pass 38 yards to help set up the kick.

Carolina pulled within 24-17 in the third quarter on Cameron Artis-Payne’s 1-yard score.

In the end, the Titans needed another turnover — a sack and forced fumble by Aaron Wallace that Jimmy Staten recovered at the 3-yard line — to set up David Fluellen’s touchdown — to pull out the win.

Cam Newton missed his second straight game for the Panthers, as he is recovering from a shoulder injury. Newton worked in individual and 7-on-7 drills for the Panthers on Thursday, the second day of joint practices between the teams, but Carolina coach Ron Rivera ruled him out on Friday for the preseason game.

Newton wasn’t the only star player missing from the lineup. The Titans elected to hold out running back DeMarco Murray, who was in uniform, but did not play. Murray has been battling a hamstring injury, but returned to practice and worked both days against the Panthers.

Fullback Jalston Fowler left the game in the third quarter for the Titans and was diagnosed with a thigh bruise. Fowler limped to the sideline and was on the Titans bench for several minutes. The team sent a cart out to take Fowler to the locker room, but he insisted on going inside under his own power.

Cornerback Dezmen Southward suffered a back injury for the Panthers, and wide receiver Brenton Bersin was hurt attempting to catch a pass on the Titans sideline and did not return.

McCaffrey, the Panthers’ first-round pick, showed his skills in the first half, first scoring on a 17-yard run for Carolina’s first touchdown, and later turning a screen pass from Derek Anderson into a 38-yard catch and run. The rookie finished the day with 33 yards rushing on three carries and had 39 yards on two receptions.