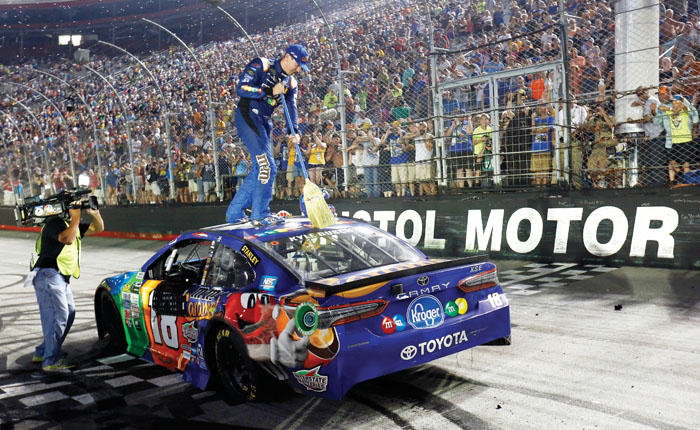 BRISTOL, Tenn. (AP) — Erik Jones really needed to win at Bristol, and Kyle Busch would have loved to celebrate the first Cup win for the kid he discovered.

But this is Bristol Motor Speedway, and Busch practically owns the place.

Busch swept the weekend for the second time in his career by winning the Monster Energy Cup Series race Saturday night. He also won in the Truck Series on Wednesday night and the Xfintiy Series on Friday night . He’s the only driver to pull of the sweep, and he also did it in 2010.

Busch toyed with the crowd, which had equal cheers and boos, by cupping his ear to the fans who disapproved of the win.

“So proud of Rowdy Nation. This one’s for you!” he shouted.

He then collected a broom from an onlooker to commemorate the sweep.

Busch admitted this win was the most difficult of the week because of the race he had with rookie Erik Jones, his protege, future teammate and fellow Toyota driver. Jones led the most laps and the rookie believes he needs a victory to lock up his spot in the playoffs.

“Erik Jones put up a whale of a fight,” said Busch. “I was running with my tongue hanging out, my arms were Jell-O and my throat hurts.”

Busch won for the 40th time in the Cup Series, sixth time at Bristol in Cup, and second time this season. All told, he’s won 20 times across NASCAR’s national series at the Tennessee bullring.

Jones settled for second, one spot short of his first career victory. He led a race-high 260 laps and felt it had been his best chance to date to win a Cup race.

He was admittedly bummed to fall a spot short, but conceded how difficult it is to beat Busch anywhere, particularly at Bristol. Busch is also Jones’ former boss, and Jones was admired at Busch’s ability to win three national NASCAR races in four nights.

Jones said he’s done a triple duty weekend before, and “it was something I honestly never want to do again, so I respect him for that.

“He’s a hardcore racer, he really commits himself to that and he does a really good job that he doesn’t let it affect his Cup racing, at all,” Jones said.

Denny Hamlin and Matt Kenseth were third and fourth as Joe Gibbs Racing took the win and two other spots inside the top four, while all four drivers were in Toyotas.

Busch passed Jones for the lead with 55 laps remaining as the track changed and the top lane became the preferable spot. Jones’ car didn’t handle as well in that area, and he had Busch and Kenseth all over his bumper. It was Busch who moved from third to first, but Jones didn’t relent.

He chased Kenseth after Kenseth moved into second, and he ultimately gouged Kenseth out of his way. It put Jones in the middle of a weird JGR sandwich. In front of him, Busch, the driver who launched Jones’ career and future teammate, and Kenseth, the guy Jones is replacing next season who is looking for 2018 employment.

Hamlin eventually took position from Kenseth, but it was so obviously a night for Toyota.

Martin Truex Jr. finished 21st and did not clinch the regular-season title.

UP NEXT: NASCAR’s top series is off next weekend for the final break of the season. The Cup Series resumes at Darlington Raceway for the Sept. 3 race that celebrates throwback eras of NASCAR.