Fighting the opioid crisis in Rowan County — from pills to heroin 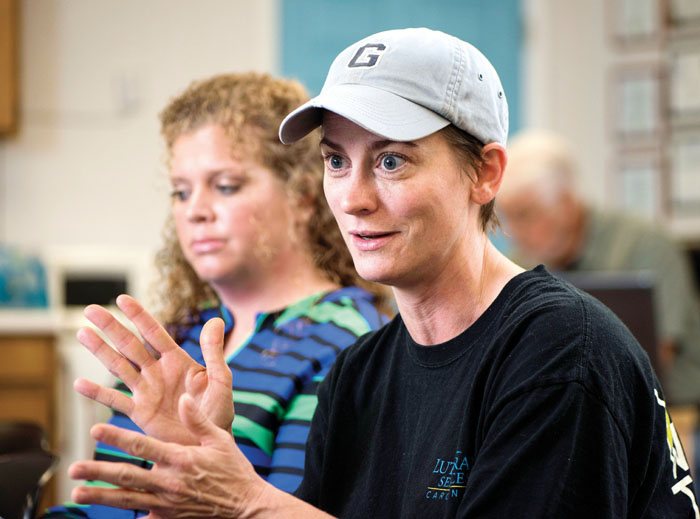 JON C. LAKEY / SALISBURY POST Wendy Barbee talks about her struggles with heroin addiction and her progress she has made to get her life back with the help of Capstone recovery. Dr. Oscar D. Ramirez, who holds a specialty in emotional trauma and substance abuse. Capstone Recovery mission statement indicates the program provides a safe Godly environment where women whose lives have been affected by prescription/illicit drug abuse and/or other life-controlling issues, can be educated and encouraged to lead fully functional lives as productive citizens in the community. Wednesday, August 16, 2017, in Salisbury, N.C.

This is first in a two-day series.

SALISBURY — In March 2017, Sara Fields was found unconscious after she’d abused heroin. She was revived with the opioid antidote Narcan. In the 14 years since she’d tried her first opioid painkiller, Fields had lost everything and nearly lost her life.

“I was brought back and I knew I had to get help or it was going to kill me,” Fields said.

Opioid-related deaths in the United States have exceeded gun homicides and traffic accidents as the primary cause of death in people under age 50.

The average heroin user typically ingests a tenth of a gram. Fields got to the point where she was taking a gram and a half of heroin throughout the day.

She usually used drugs with a friend, and together they’d buy and use three and a half grams a day. The two would take heroin every several hours. When the effects wore off, they’d do a little more.

“I’d keep doing it throughout the day to keep being functional,” she said.

Heroin gave Fields a euphoric feeling and a sense that she was in control, even though her life was anything but in control.

Unlike some who develop an addiction or dependence for opioids because of pain management following a surgery or injury, Fields said she just wanted to try it.

When she was 19 years old, Fields was given one 30 mg roxycodone tablet. Roxycodone is the name brand of oxycodone hydrochloride tablets, which come in three different dosages — 5 mg, 15 mg or 30 mg. Roxycodone is twice as potent as hydrocodone.

Before pills, she smoked the occasional marijuana in high school when she was 15 or 16 because at the time it’s what everyone else was doing, she recalled.

“I guess there was always a void in my life. I had a good family. I grew up in Kannapolis. It was something that made you happy, gave you energy, and you know that was what I did,” she said of her pill addiction.

Before she knew it, Fields was physically addicted. Soon she went from roxycodone and hydrocodone to crack cocaine and heroin.

“My drug of choice was heroin, but it becomes a real cocktail when you’re in it that long,” she said.

More than 80 percent of people who use heroin began abusing opioids first, according to the National Institute on Drug Use.

Years later, Fields couldn’t go to work or get up to take care of her children unless she was high on something.

“You get up and you better have something by 12 o’ clock or it just wouldn’t work,” she said.

In July 2010, Fields’ world was turned upside when she lost her daughter, 4-year-old Mallory, and her parents, Danny and Raychel Carroll, in a plane crash. Danny, co-owner of Lady’s Funeral Home in Kannapolis, was a licensed pilot. He flew the trio to South Carolina for a short vacation and the airplane crashed shortly after take off.

Fields’ addiction didn’t start because of the accident, but she admits it progressed following the tragic crash. In May 2011, Fields was arrested in a Kannapolis motel and charged with heroin trafficking and cocaine possession.

“I felt like I was owed my addiction because of the loss of my family, which isn’t true, but that’s how I felt,” Fields said.

She worked and maintained a job, but eventually all of her check went to feed her addiction. She soon didn’t have money to pay the bills. When her parents were alive they would help her.

After the plane crash, Fields received an inheritance that she soon lost to the drugs she regularly bought to maintain her habit.

“My addiction has touched every area of my life,” she said.

Fields’ 8-year-old son knows and understands that his mother has an addiction. In 2013, she had a stillborn baby. She eventually divorced and lost full custody of her son.

“Your family, as an addict, they can get tired of hearing you say, ‘I’m going to do different,’ ” she said.

After losing her baby she stopped and thought, “there has to be more to my life than addiction and death,” Fields said.

A few months later, Fields enrolled herself into a treatment center. She’s been on methadone and suboxone, both drugs used to treat narcotic addictions. She even obtained subutex, another treatment drug, which she bought off the street, and those drugs worked — temporarily.

“I’m hard-headed and stubborn, so I’ve had a lot of rock bottoms. But when your addiction is about to kill you, I think that is about as bottom as you can get,” she said.

“All the money I had, I don’t have. So now I have an inheritance in heaven. For me, Jesus is the only thing that can keep me clean and sober,” she said.

Wendy Barbee and her now-ex-husband were able to manipulate their way into getting monthly prescriptions from a doctor for 600 30 mg of roxycodone as well as 10 mg of oxycontin for her and 40 mg of opana for him.

“We would run out a couple weeks ahead of time. We called him up and went back and he would write us a different script,” she said of the doctor.

Her husband did work for the doctor and as payment he’d write them regular prescriptions.

She was experimenting at the time, never used marijuana because of the paranoid feeling it gave her, but Barbee “fell in love with opiates.”

She loved the energy the pills gave her and loved that they also allowed her to sleep when she wanted.

Her history of drug use involved mostly prescription pills, which she snorted, but there was one time when she snorted heroin.

Barbee hit rock bottom when she found herself homeless with three children. She and her husband were separated and the Department of Social Services took custody of her son.

“I think every drug addict knows that this ain’t right as they are doing it, but they are caught up in it and it’s the only thing that they know that relieves their pain or allows them to escape,” Barbee said.

Her children were 14 and 10 at the time and she had a 17-year-old son who had already moved out of the home.

Barbee never used drugs in front of her children, but they certainly saw the straws lying around the house. On Thanksgiving Day in 2014, Barbee showed up at her mother’s house so high that she fell asleep standing up. She abused drugs for 14 years.

“You get into this cycle. It’s kind of like a mindset. You run to a thing, it gives you comfort. It gives you everything that you are desiring to feel. It numbs you, you don’t feel any more pain,” Barbee said.

The drugs gave her joy and that’s what she ran to because it became what she knew.

“Essentially, it became my God at that point. It was something I was serving,” Barbee said.

“Getting clean scares the crap out of people because after you stay in that for so long you don’t know what that feels like anymore,” she said.

Barbee described the withdrawal symptoms as a horrible feeling. She had sleepless nights, hot and cold sweats.

“You feel like you’re going to jump out of your skin. You just feel uncomfortable in your skin,” she said.

One day, Barbee heard God telling her to make a decision. She said she felt God urging her to choose, “it’s going to be me or your pills,” Barbee recalled.

“Whenever they were taken away I knew I was going to die in the mess if I was to continue on,” she said.

Barbee asked her case worker to take her to detox the same day. It was on Dec. 18, 2014, that Barbee took that leap of faith.

“The programs help, but it’s Jesus. He’s the only thing that keeps me sober,” Barbee said.

She’s done detox programs before, using suboxone and methadone without any success.

Barbee was enrolled in a program through Solus Christus, a treatment facility in East Bend. Similar to Capstone, the transitional treatment center is faith-based and for women.

“Capstone is kind of like the family that I needed. It has been a place of refuge in order to get my mind out of the old way of thinking into a new way of thinking so that I can operate in society like I should,” she said.

She’s got her own place and her children are back with her. Barbee works at the Lutheran Home and co-counsels other women at Capstone. She graduated from Rowan-Cabarrus Community College in May with an associate degree.

Barbee was accepted to both Trevecca Nazarene University and Liberty University and is currently looking at financial aid options. She hopes to counsel young girls.

“My pain has birthed my purpose,” Barbee said.