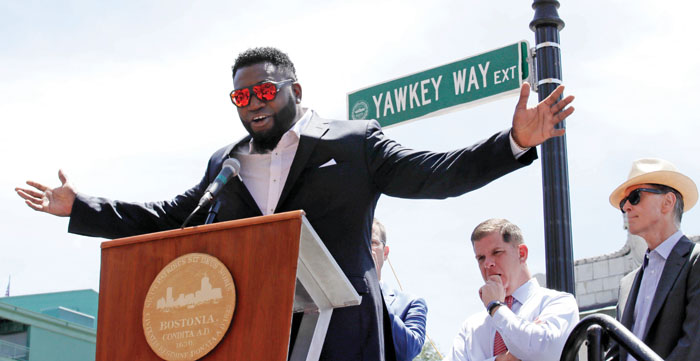 FILE - In this June 22, 2017 file photo, retired Boston Red Sox designated hitter David Ortiz is honored with the renaming of a portion of Yawkey Way to David Ortiz Drive outside Fenway Park in Boston. Red Sox principal owner John Henry, at right, says he wants to take steps to rename all of Yawkey Way, a street that has been an enduring reminder of the franchise's complicated racial past. At center rear is Boston Mayor Marty Walsh. (AP Photo/Charles Krupa, File)

BOSTON (AP) — The Boston Red Sox will ask the city to rename Yawkey Way, the street alongside Fenway Park, to change what owner John Henry called a haunting reminder of the ballclub’s history of racial intolerance.

Henry told the Boston Herald on Thursday that he welcomes changing the name of the street that honors his predecessor Tom Yawkey, an inductee in the baseball Hall of Fame. It’s also the mailing address for the ballpark and team offices.

Under Yawkey, who owned the club from 1933-76, the Red Sox were the last team in the major leagues to cross the color barrier in 1959. The team chose not to sign black players, including Jackie Robinson and Willie Mays.

“It’s a continuation of John’s strong feelings about tolerance and inclusion and making sure that everyone in Boston and New England feels welcome at Fenway Park,” Red Sox president Sam Kennedy told The Associated Press. “This is just the beginning of a process that will involve the community.”

Henry did not immediately respond to a message from the AP seeking comment.

Kennedy said a change would require a discussion among the property owners along Yawkey Way. In addition to the Red Sox, that would mean the owner of a large souvenir stand across the street from Fenway Park, as well as a hamburger restaurant on the corner, he said. (The owners of the souvenir shop told the Herald they would not be opposed to a name change.)

Henry told the paper he would like to see the street renamed for David Ortiz; the city has already named an extension of the road after the former Red Sox slugger, who retired last year.

Yawkey came into his inheritance in 1933 at the age of 30 and promptly bought into the all-white sport of major league baseball.

Then he did what he could to keep it that way.

As other teams abandoned the color barrier, the Red Sox held out, giving Robinson a tryout and scouting Mays but opting to sign neither.

Yawkey owned the club until his death in 1976, when his wife, Jean, took control. She died and left the ballclub in the care of a foundation that bore their name; trustee John Harrington ran the team until it was sold to Henry and his partners in 2002.

“When we got here in 2002, one of the first things (Henry) did was acknowledge the shameful past in terms of race relations and inclusion,” Kennedy said.

Still, the team has struggled to accomplish its goal of making Fenway more welcoming to minorities.

In May, Orioles outfielder Adam Jones said a fan called him a racist slur; Kennedy apologized. The same week, a fan was banned from the ballpark for life for using a variant of the N-word while speaking to another fan about the national anthem singer.

Henry told the Herald that he had previously approached the city before about changing the name, but then-mayor Tom Menino “did not want to open what they saw as a can of worms.” The Yawkey Foundation, which was funded largely by the $700 million Henry’s group paid for the team, has been a philanthropic force in Boston for the past 15 years.

“The Yawkey Foundation has done a lot of great things over the years that have nothing to do with our history,” Henry told the paper.

Among the things in Boston named for Yawkey are an athletic building at Boston College and the Red Sox Most Valuable Player Award bestowed by the local chapter of the Baseball Writers Association of America.