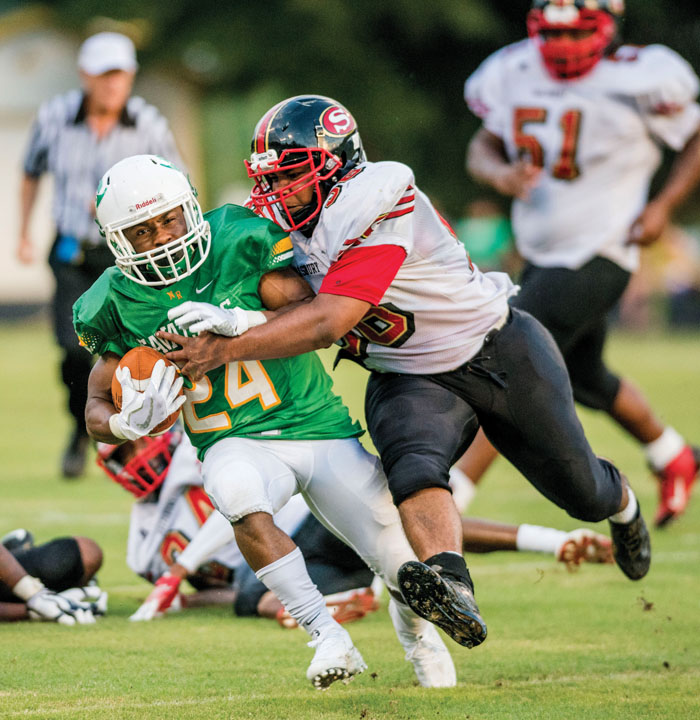 SPENCER — Just when it seemed old rivals Salisbury and North Rowan were about to put on an offensive show in Friday night’s season opener, the Cavalier defense slammed the door.

North’s defense held the Hornets (0-1) to 11 total yards and four first downs in the decisive second half at Eagle Stadium en route to a 42-15 win. It was the fifth win in a row for the Cavs (1-0) over their next-door neighbors.

The Cavaliers got plenty of balanced offense for the game as well as all-county senior Jaleel Webster battled some leg cramps on the steamy night but still managed 108 yards and two TDs on the ground, and another 68 yards through the air.

Webster’s running mate, junior Malcolm Wilson chipped in72 yards and two more scores. New starting quarterback Willis Mitchell had a solid game in his first outing, passing for 122 yards and one TD while rushing for 30 yards and a score.

But in the end, it was still the defense that made all the difference for the Cavaliers.

“We just shut them out and our pass rush got so much better in the second half,” said senior defensive end Darren Williams. He had two key sacks and joined forces with tackle Matthew Hoosier to make life miserable for Hornets’ quarterback Griffin Myers and his offense in the final two quarters. “Coach told me and Matthew we had to step it up and be leaders in the second half.”

Salisbury new head coach Brian Hinson was quick to acknowledge the North defense as the difference. “They have a really good defensive line, that is their strength,” Hinson said. “We fought hard but they were so physical. For our offense to work, we have got to establish our running game and we were not able to do that.”

North held the Hornets to just 26 net yards of rushing for the game, sacking Myers three times for negative 24 yards.

“We made some adjustments at the half,” said North head coach Ben Hampton, who said he was not happy with the mental mistakes and breakdowns in the first half. “But in the second half, our front four just got after it, and our linebackers started flying around a little. I was real pleased with the way we adjusted.”

Prior to intermission, the two teams seemed to take turns scoring, with some spectacular plays on both sides. North took the first lead, 6-0 on a pass from Mitchell to Quintous Smith from 14 yards. But Salisbury took just one play to explode into the lead as Myers found Trell Baker sprinting down the right side for a 67-yard play. Myers’ two-point run made it 8-6.

North responded with a seven-play drive, capped by a 14-yard sweep for the score by runner Malcolm Wilson. The Cavs went up, 13-8, on the first of four PAT kicks by Jacob Young. Then Young showed his punting ability by booming a 61-yarder as the first quarter ended, pinning Salisbury back at its own 20.

However, Myers  found speedy junior Tyrone Johnson open down the right side for a 73-yard gain to the Cavaliers’ 7-yard line. North’s Josh Ellis made a diving tackle to save the TD.

Three players later, Myers hit senior Joe Steinman on the slant over the middle for the score and a 15-13 Hornets lead.

Salisbury seemed to have the lead secured at halftime, but North and Webster had other ideas. A short screen pass from Mitchell turned into a 45-yard sprint by Webster to the 1-yard line with just over a minute left in the half. Mitchell scored from there and suddenly, it was 21-15. It would be all North would need for the night.

While the defense was dominating the second half, North’s offense expanded the lead with a TD in the third period on a 1-yard Webster dive, then two more in the fourth quarter on nice runs by Webster and Wilson.  The 24-yard touchdown by Webster actually was quite remarkable as he seemed to be nailed for a loss when he reversed the field and zigged-zagged into the end zone.

“I learned my sophomore year to keep my feet moving on a play like that,” Webster stated. “I just remembered to keep moving and my teammates had my back. It was a good night for our offense.”

North will travel to Mount Ulla next Friday, where Hampton and his brother-in-law, West Rowan coach Joe Nixon, will square off in camouflage on Military Appreciation night. Salisbury will host county rival Carson and former coach Joe Pinyan next Friday at Ludwig stadium.