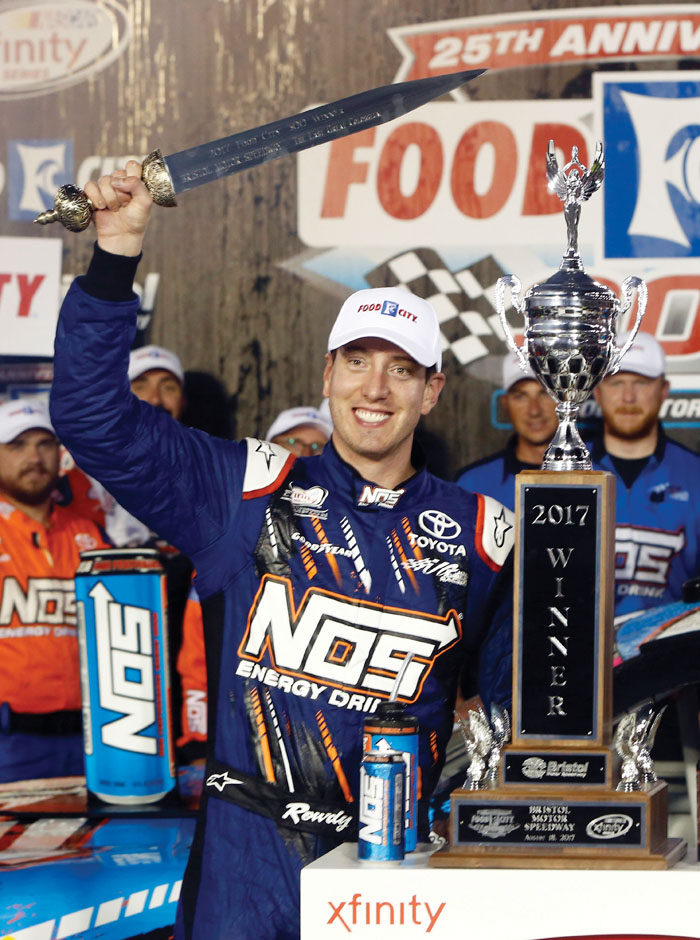 The win was the 19th national series victory at Bristol for Busch, who also won the Truck Series race Wednesday night. And just like that win, Busch had to overcome a speeding penalty on pit road to get to victory lane.

Busch won the first stage of the race and was then popped for speeding. He drove from 29th in line to the lead in 58 laps after the penalty, and won the second stage. Busch then drove away to an easy 91st career win in the Xfinity Series, and he’s said he will stop racing in the series once he hits 100 victories.

“This deal’s really special and you know we want to keep it going, but obviously the countdown is on,” Busch said.

He joked in victory lane the fans will be pleased when that day arrives. Busch will go for a Bristol sweep Saturday night in the Cup Series race, and thanked his supporters — dubbed “Rowdy Nation” — for cheering on his effort to sweep the weekend at Bristol.

“Hopefully we can close it out tomorrow,” said Busch, who will start 18th in Saturday night’s Cup race.

“I think we can. We’ve got a fast car. We just have to make the right adjustments overnight here and get it ready.”

On Friday night, he had one brief challenge, on a restart with nine laps remaining, but easily got by Daniel Suarez and wasn’t challenged.

Suarez finished second for a 1-2 finish for JGR and Toyota.

Elliott Sadler was third in a Chevrolet for JR Motorsports and clinched a spot in the Xfinity Series playoffs. He was followed by a slew of Chevy drivers: Ty Dillon, Justin Allgaier, Brennan Poole, Daniel Hemric and Austin Dillon.

Joey Logano was the highest-finishing driver for Ford in ninth, and Cole Custer rounded out the top 10.

“He’s one step away from the sweep,” Allgaier said. “He had the best car.”