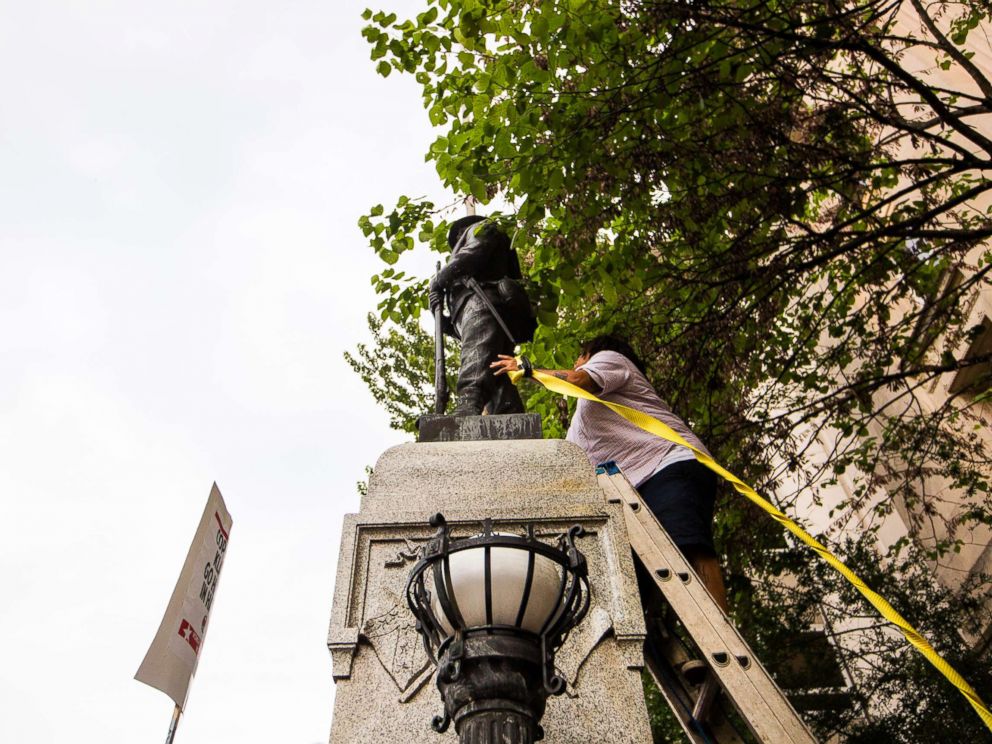 A young woman prepares to tear down a Durham statue of a Confederate soldier.

When confronted by an opponent espousing well-worn phrases, President Ronald Reagan would repeatedly say to President Jimmy Carter, “There you go again.” His timing was impeccable, likely from his training as an actor and his non-confrontational demeanor. President Trump could learn much from his revered Republican predecessor.

Some presidential rhetoric is not unlike the protesters on all sides who see ghosts where there may be none and wish to hang on to traditions rather than move on. The Confederate statues in question are being attacked not just for philosophical reasons but because other groups don’t have their heroes equally displayed.

Racism, sexism and many “isms” are wrong by their very nature, for they assume I’m right and the other is wrong. White racists are nothing to explain away, nor are the black revolutionaries whose rhetoric often prompted many to violence. It is what it is. …

My mother loved to tell me about Southern history and her home in Richmond, Va., which was once the capitol of the Confederacy. Every night WRAL in Raleigh closed with a rendition of Dixie. At the W. G. Pearson Elementary School, J. A. Whitted Junior High School or Hillside High School of Durham, the Negro National Anthem was played for important occasions.

Statues must stand whether we like them or not, for they are a concrete example of free speech. Slave owner Thomas Jefferson wrote the Declaration of Independence, which is a brilliant working tribute to freedom and liberty. The contributions of George Washington, another presidential slave owner, cannot be diminished because of a moral flaw. George Santayana noted “Those who cannot learn from history are doomed to repeat it.” Those destroying or defacing private property should also face prosecution under state laws.

As I watched the young black lady in my hometown of Durham put a noose around the old courthouse Confederate memorial statue, which we marched past in many a holiday parade, I thought how ironic. It was lynching that silenced so many of our people.

Given that, will whites go down the street to the campus of North Carolina Central University and remove the statue of its black Republican founder, James E. Shepard, or even destroy the Washington, D.C., monument to Dr. Martin Luther King Jr.? The ignorance and unpeaceful acting out being displayed should not be tolerated.

Before he died, I asked our U.S. senator, Democrat Sam Ervin, why he had not supported any of the Civil Rights Bills during his tenure. The essence of his response in its simplicity was profound — the U.S. Constitution already contains the language proclaiming that all men are created equal. When you write such supplementary civil rights bills, you acknowledge that some aren’t equal.

We simply need to enforce the law for all as originally written and other bills won’t be necessary.

Henry Wadsworth Longfellow wrote in “Psalms of Life,” “Let us then be up and doing, With a heart for any fate …”

Each individual engaging in quiet acts of random kindness can produce revolutionary butterflies in spirit.