Column: We need Kaepernick more than ever in these times 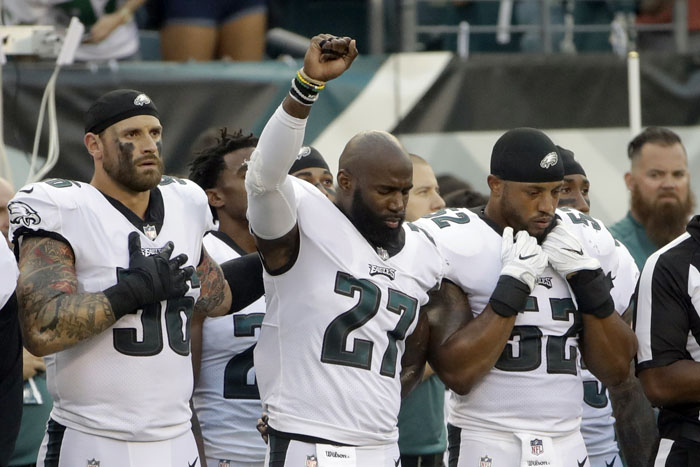 It’s been a terrible week in America.

Maybe if we had just followed the lead of Colin Kaepernick, who had hoped the simple, non-violent act of taking a knee during the national anthem would move us to talk more about some of the serious problems plaguing this country.

Maybe if we had just focused on conversation instead of condemnation, it would’ve been a much better week.

“I’m not anti-American. I love America,” Kaepernick said nearly a year ago , in the early days of his passive but powerful protest against police brutality and a justice system that treats people of color unfairly. “I love people. That’s why I’m doing this. I want to help make America better, and I think having these conversations helps everybody have a better understanding of where everybody is coming from.”

Unfortunately, far too many people didn’t hear what he was saying.

They only focused on what they saw as an act of defiance, a blow against all that America stands for. The non-violent tone of his actions was lost on them.

Look where we are now.

In the past week, Nazis and KKK members marched through the streets of Charlottesville bearing Tiki torches and chanting anti-Semitic slogans, a display that would’ve made Joseph Goebbels proud. A woman who came to protest the bigotry and hatred was run down by a car in those same streets. The president cast racists and those who oppose them as being equally responsible for the violence , all while defending monuments to those who rebelled against this country in support of slavery. Beyond our shores, a terror attack in Barcelona claimed more than a dozen lives, while a knife-wielding man randomly killed at least two more people Friday on the streets of Finland.

Sports figures have weighed in on all the discord.

LeBron James referred to Donald Trump as the “so-called president.” Kevin Durant of the NBA champion Golden State Warriors said he won’t be accepting an invitation to visit the White House because he doesn’t “respect who’s in office right now.” Los Angeles Dodgers pitcher Brandon McCarthy took to Twitter to mock the idea that both sides were at fault in Charlottesville: “On one hand you had the Nazis who were violent & on the other the allied soldiers were very violent. So it’s a draw. Many sides you see.”

Meanwhile, Kaepernick’s continued blackballing from the NFL has drawn the ire of some fellow players, who have carried on his protest by kneeling or raising fists during the national anthem. Some have called for an even stronger stand, with the Atlanta chapter of the NAACP urging a boycott of games if the quarterback isn’t signed by a team before the opening weekend.

“We will take a knee, and we will continue to take a knee on the NFL until they act with one voice,” said Gerald Griggs, vice president of the local branch.

Seattle Seahawks receiver Doug Baldwin said the divisive issue of race in America, and especially the events of the past week, only sharpen his belief that Kaepernick’s actions were justified.

“He made himself vulnerable,” Baldwin said, turning emotional as he spoke. “Especially about a topic that he feels so deeply about, that I feel so deeply about. Injustice and inequality, whether you agree with it or not — that’s irrelevant. Somebody believes something, so I definitely think the way that he approached it was excellent, very methodical but also very brave.”

As grim as things seem at the moment, it’s never too late to start the healing.

We can start by talking with each other, instead of yelling at each other.

Take a cue from Philadelphia Eagles defensive end Chris Long, who grew up in Charlottesville. When teammate Malcolm Jenkins thrust his right fist in the air during “The Star-Spangled Banner” at an exhibition game Thursday night, Long put his right hand over his heart, his left hand on Jenkins’ shoulder.

Jenkins is black. Long is white.

It was a powerful symbol of unity , one that was badly needed in these troubled times.

There is no doubt that Kaepernick should be playing quarterback in the NFL. His ample qualifications have been fully documented by numerous statistical sites and media outlets .

There is also no doubt the point he made still resonates — civil discord without coming to blows, or worse.