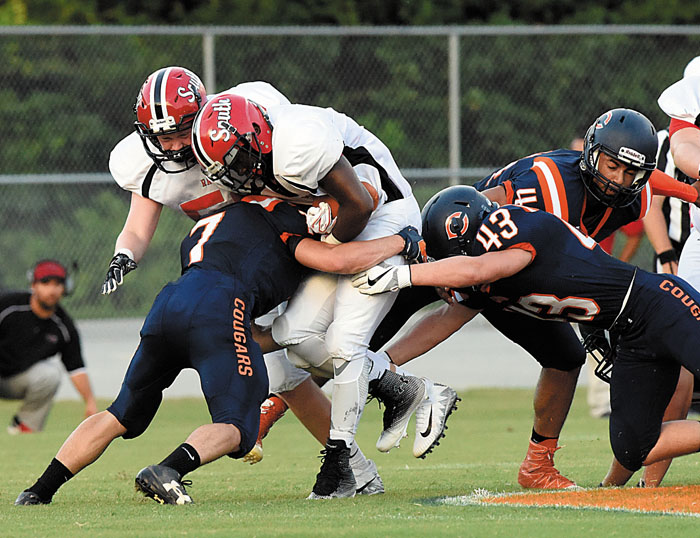 CHINA GROVE — If Cole Sifford and his Carson teammates were feeling the heat Friday night, it hardly showed.

The senior quarterback remained composed and careful when it mattered most — down the stretch in an 18-15 season-opening win against visiting South Rowan.

“It all starts with the offensive line,” Sifford said after Carson maintained possession for nearly 10 minutes in the scoreless fourth quarter. “We can’t do anything without them.”

With its line leading the charge, the Cougars held off the vastly improved Raiders and used sophomore Hunter Courtney’s third-quarter touchdown run to erase a 15-12 halftime deficit. He took a pitch from Sifford, picked up devastating blocks from Josh Lee and Jemarius Hairston and sprinted 31 yards down the left side for his second TD of the game.

“It was an amazing night,” Courtney said after rushing for 72 yards in his first varsity game. “Every play was hard because you never know what’s going to happen. You’ve got to play it as you see it. You see a gap, you’ve got to hit it.”

Sifford scrambled for 96 yards and passed for another 86, helping Carson avenge last season’s Hurricane Matthew loss to South. “Last year they were really physical with us,” he said. “We didn’t want that to happen again. A loss tonight would have hurt all season.”

Third-year South coach Daniel Yow found a number of reasons to applaud his team’s opening-night effort. The Raiders played stand-up defense and received a strong game from quarterback Brett Amburn, who looked confident while passing for 139 yards and touchdown to Marquis Rhyne on the last play of the first half.

“We were in better shape and mentally tougher than we’ve been the last two years,” Yow said. “In the first half,  we made a lot of mistakes but were able to fight through it and take the lead. But in the second half, we got a little tired on the offensive line. A lot of those guys play both ways and we were on defense a lot.”

South took an 8-0 first-quarter lead, sparked when punter Kory Sellers ran for 56 yards on a fourth-down fake to the Carson one. Two snaps later Amburn tumbled into the end zone to open the scoring. “Kory Sellers has some speed,” the QB said with raised eyebrows.

Carson pulled within 8-6 early in the second period, following Josh McCurry’s interception deep in South territory with 8.7 seconds remaining in the first quarter. Courtney scored his first TD on a 2-yard sweep to the left side. On it’s next possession, Carson navigated 45 yards on seven plays and went ahead 12-7 when Sifford crouched under the OL and scored from the one.

The scoreboard clock read 0:00 when when Rhyne outjumped Carson’s secondary on a 24-yard touchdown reception to close the half.

“The only reason they were scoring was because of big plays,” said Cougars’ linebacker Zain Tucker. “We had a couple breakdowns in the secondary and they took advantage. In the second half they kept running the ball — and that’s where we shut them down. They couldn’t get anything going.”

Carson’s defense pitched a second-half shutout, limiting the guests to 53 yards and two first downs after the break. “Take away the fake punt and the hail Mary pass at the end of the first half and our defense shut them down,” said winning coach Joe Pinyan. “Early in the year, you probably don’t expect that to happen. Overall, you have to give them an A-plus.”

Still, Carson secured this victory by playing ball-control offense in the final quarter. With Sifford at the wheel, a drive that began at its own 38-yard line stalled with a couple of incompletions inside the South 10 exactly 6:50 later.

“Their quarterback was their best weapon,” Yow said. “Whenever we let him squeeze through a small hole, he’d gash us.”

Perhaps Tucker had the best closing line. “When something went wrong, we didn’t freak out,” he said. “We kept it under control.”