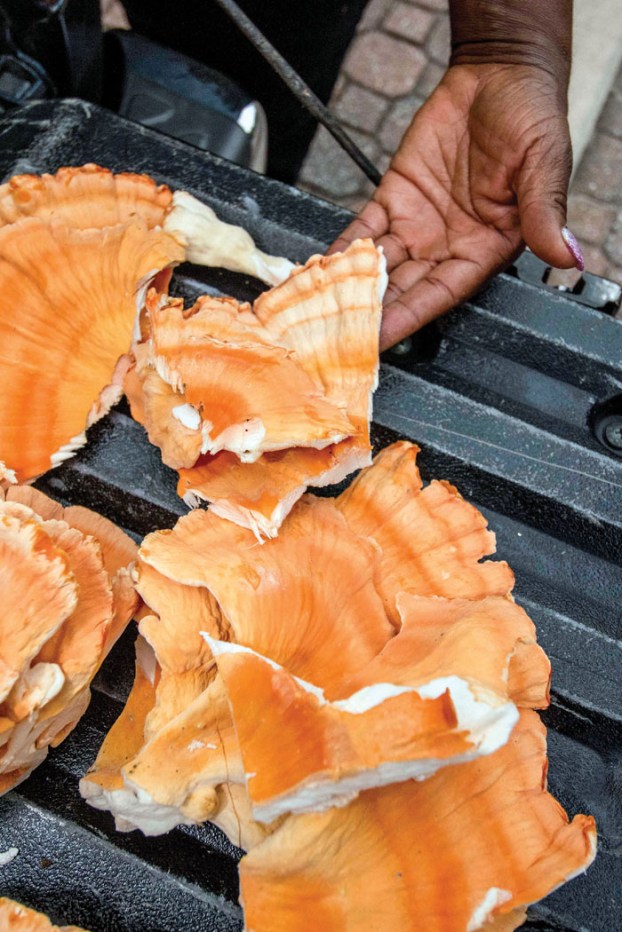 Angie Vaughn wanted to share the large mushroom she called "Chicken of the Woods" which she found growing on a decaying trunk of an oak tree. Jon C. Lakey/Salisbury Post

A happy find — ‘Chicken of the Woods’ mushrooms

SALISBURY — Angie Vaughn of Salisbury has taken her “eat local” efforts to a new level — fungus.

Vaughn recently found huge mushrooms on a friend’s property off N.C. 150 that were hard to ignore. They looked like stacks of big, rippled shelves, some with bright orange rings and nearly a foot wide.

She identified the orange mushrooms as the edible Chicken of the Woods variety. The mushrooms were so impressive, Vaughn took them to the Salisbury Post to be photographed.

“Learning about local edibles is a real passion of mine,” said Vaughn.

She found the mushrooms growing from the stump of a large oak tree that had fallen. She planned to saute some of them with garlic and onions to serve over rice. The mushrooms could also be deep-fried like chicken, she said.

Interest in edible and medicinal mushrooms has been growing across the state, according to the N.C. Cooperative Extension Service. Button and shiitake mushrooms are the most popular. There are also a number of growers in the state who raise truffles, highly prized in gourmet circles.

Many wild mushrooms are toxic, so proceed with caution. But Laetiporus sulphureus —  Chicken of the Woods — is one of the most easily identifiable wild mushrooms that is safe to eat.

Vaughn said she researched the topic online and watched YouTube videos to learn how to cook the Chicken of the Woods.

“I’m into locally grown everything,” she said.

She owns six chickens and eats fresh eggs almost every day, she said, and she wants to look into honey production.

“Wild edibles are good for you,” she said. “These are supposed to have anti-inflammatory properties.”

A check with Vaughn a few days later confirmed that she had enjoyed eating the Chicken of the Woods mushrooms. She cooked some and froze the rest. She said they tasted like — surprise — chicken.

Vaughn might be able to use the mushrooms as a substitute for chicken, but don’t ask her to give up meat altogether.

“I would love to become a vegetarian,” Vaughn said, “but pork is not a vegetable.”

Concord battery factory to close, putting 290 people out of work

Staff report CONCORD — Battery manufacturer Alevo has filed for bankruptcy, which means 290 people at its plant in Concord... read more