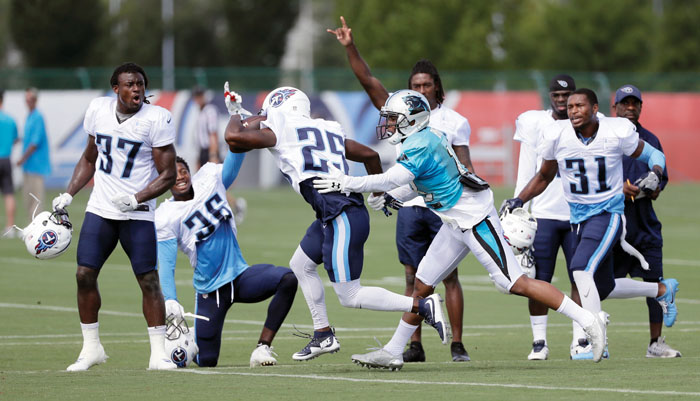 NASHVILLE, Tenn. (AP) — Cam Newton threw passes in a 7-on-7 drill, doing more against the Tennessee Titans than the Carolina quarterback did in the first joint practice between the teams.

Then Newton returned to his cheerleader role Thursday, and he had a lot of company.

Tight end Greg Olsen got the session off as a veteran along with running back Jonathan Stewart and center Ryan Kalil.  For those Panthers who did participate, Panthers coach Ron Rivera was not happy with their performance.

Rivera talked briefly with his Panthers before they headed to the buses and made it clear just how he felt. He said he basically explained that being great means playing at that level every day.

“The guys that dropped the balls were guys that got opportunities, and they were good balls that got dropped,” Rivera said. “When the ball hits you in the hand, you got to catch it. That’s just the way I look at it. The guy’s in front of you, you got to block him. Those are things that we didn’t do well … and because of it we didn’t look very good.”

The Titans, on the other hand, looked pretty good — especially on defense.

Pro Bowl defensive lineman Jurrell Casey had the day off for Tennessee with the Titans also missing wide receiver Eric Decker (ankle) along with a handful of other injured players.

Whether Newton plays Saturday in Carolina’s preseason game against the Titans (0-1) will be decided Friday after the quarterback meets with trainers about his shoulder . That seems unlikely considering the 2015 NFL MVP did not throw a single ball in a team drill during the two joint practices, and the first time Newton threw passes defended by Tennessee was Thursday.

Rookie cornerback Adoree Jackson broke up a Newton pass to the corner of the end zone during that 7-on-7 drill.

“You could tell he was rusty, late on a couple decisions that he made,” Rivera said. “When he was throwing the ball, he was throwing the ball well so we’re not concerned about that. Now it’s just a matter of getting him into shape where he can go out there and take normal reps, instead of us having to make sure we’re monitoring him.”

The Titans rebounded from their first practice with Carolina.

Linebacker Wesley Woodyard tipped an interception to himself off a pass thrown by Joe Webb and returned it for a touchdown. The Titans’ first-team defense forced Carolina into a couple of throwaways before Derek Anderson was incomplete on a third pass. Pro Bowl linebacker Brian Orakpo had a sack, and rookie linebacker Jayon Brown forced Chris Manhertz to fumble.

Jackson, who also broke up another Newton pass during a 1-on-1 drill, intercepted a pass in a team drill.

“That was good to see,” Titans coach Mike Mularkey said of the rookie drafted at No. 18 overall out of Southern California . “Hopefully a little bit of a confidence booster for him. He’s had a good camp.”

Panthers rookie running back Christian McCaffrey said there were too many “self-inflicted” mistakes.

“We have a standard, and it’s higher than that for sure,” McCaffrey said.

On the other field, Marcus Mariota helped wrap up practice by finding Pro Bowl tight end Delanie Walker for a touchdown in a team drill. To Mularkey, it was a nice change after the Titans didn’t finish Wednesday the way they wanted.

“I thought they had about as complete of a practice as they’ve had out here,” Mularkey said of Thursday’s session. “I was pleased to see that. We got a lot of work with some of the younger guys. A lot of good things to teach off of from two days.”

Notes: The practice marked the end of training camp, at least for Tennessee veterans. Younger Titans will stick around the team hotel for another day. … The Titans signed DB Darrius Sims, who practiced Thursday, and waived injured DE Kourtnei Brown.

PHILADELPHIA (AP) — Of all the high-profile players making debuts in a new uniform, Eagles cornerback Ronald Darby was most impressive.

Darby intercepted former teammate Tyrod Taylor’s pass and returned it 48 yards and also broke up two passes in his first game since Philadelphia acquired him from Buffalo last week, and the Eagles beat the Bills 20-16 on Thursday night.

Winston had two passes dropped, including what would have been a 43-yard touchdown strike to Mike Evans in the first quarter.

The Buccaneers (1-1) scored on their first three possessions, getting a short touchdown run from Doug Martin and two field goals from Nick Folk. Tampa Bay dominated Jacksonville in two quarters that featured mostly starters, outgaining the Jags 240-59 and looking like the much better team.

Evans finished with five catches for 57 yards, but missed a chance for a huge gain when he let Winston’s perfectly thrown deep ball slip through his fingers. It was about the only thing that went right for the Jaguars (1-1).

Backup quarterback Chad Henne got some work with the first-team offense, fueling speculation that Blake Bortles has lost his grasp on the starting job.

Henne entered late in the second quarter after Bortles played four series that ended in punts. Even though the move had been planned beforehand, it surely created the appearance that Marrone and football czar Tom Coughlin are wavering in their commitment to Bortles.

Marrone and Coughlin have publicly supported Bortles all year, even picking up the fifth-year option in his rookie contract. But Marrone pulled the third overall pick in the 2014 NFL draft last week following two interceptions. Marrone said Bortles’ “arm looked tired.” Bortles denied having any issues.

Bortles completed 8 of 13 passes for 65 yards against the Bucs. He doesn’t have a touchdown or a turnover in two preseason games.

Henne’s first pass should have resulted in a touchdown, but Keelan Cole dropped it at the goal line. Henne finished 6-of-10 passing for 44 yards.

Jason Myers missed from 40 yards out, leaving him 1 for 4 on the season. He also missed an extra point in the fourth. The Jaguars don’t have another kicker in camp, but that likely will change Friday.

Dede Westbrook, a fourth-round draft pick from Oklahoma, finished with five catches for 101 yards. He was one of the few bright spots for Jacksonville. Westbrook and third-string quarterback Brandon Allen got the Jags to the 2-yard line in the final 2 minutes, but Allen misfired on a fourth-and-1 play.

Jacksonville, which wants to be a power run team, ran seven times for minus a yard in the opening half. The Jags managed four first downs and got booed by the home crowd when Bortles badly underthrew a wide-open Allen Robinson in the seam.

Jacksonville: Running back T.J. Yeldon injured his left hamstring and did not return. Cornerback Charles Gaines injured his right eye.

Alshon Jeffery, a former Pro Bowl wide receiver signed by the Eagles in the offseason, caught his first pass from Carson Wentz and finished with two receptions for 23 yards.

Bills cornerback E.J. Gaines also had an interception in his first game since coming from the Rams in a trade last week. Gaines picked third-string quarterback Matt McGloin, who has struggled in two preseason games.

The Eagles traded wide receiver Jordan Matthews and a 2018 third-round pick for Darby. Matthews, a popular player in Philadelphia’s locker room, didn’t make the trip because of a chest injury.

Both teams looked sloppy in a mistake-filled game. There were 23 penalties and seven turnovers, including Mitchell White’s interception in the end zone on the final play to secure the win.

After T.J. Yates tossed a 9-yard touchdown pass to Brandon Reilly late in the fourth quarter to give the Bills a 16-13 lead, Philadelphia’s Byron Marshall ran in from the 1 for the go-ahead score.

Chris Long, the Philadelphia defensive end who grew up in Charlottesville, Virginia, put his arm around teammate Malcolm Jenkins as a show of unity while the safety stood with his right fist raised in the air as he’s done since last season. Long was to his right with his left arm on Jenkins’ shoulder.

Eagles: McGloin was 12 of 20 for 131 yards and one interception. He took most of the snaps because backup Nick Foles remains sidelined. … Dane Evans completed 9 of 12 or 92 yards and one pick.

PLAYER OF THE GAME

Eagles LB Mychal Kendricks had a sack, interception and tackle for loss. Kendricks had asked for a trade in the offseason, but he’s slated to be the starter at the outside spot.

Bills RB LeSean McCoy, the Eagles’ franchise rushing leader, had 21 yards rushing on four carries and still runs better than every running back Philadelphia has tried since former coach Chip Kelly traded him to Buffalo in 2015.

Bills: WR Zay Jones, a second-round pick, had three catches for 42 yards. He made a nifty grab in the corner of the end zone late in the second quarter, but couldn’t get both feet in.

Eagles: DE Derek Barnett, the 14th overall pick, had another sack after getting two in the preseason opener. … Undrafted RB Corey Clement had 34 yards rushing, including a 6-yard TD.

Bills WR Rod Streater was carted off the field early in the fourth quarter after injuring his foot. The entire Bills bench walked over to the cart to comfort Streater before he was driven to the locker room. There was no immediate word on the extent of his injury.