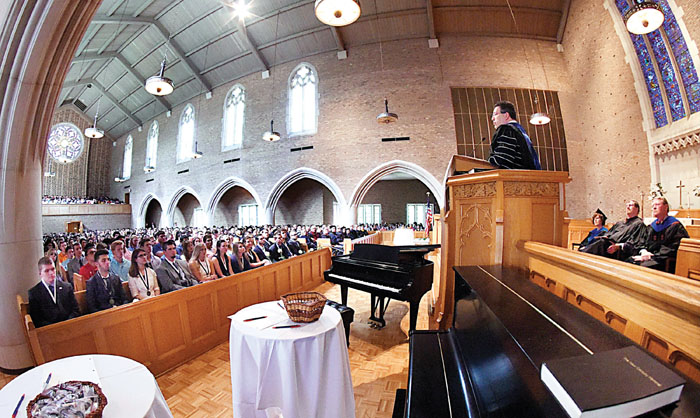 SALISBURY — Catawba College President Brien Lewis said white supremacy groups and the type of violence that broke out at a rally in Charlottesville, Virginia, last weekend have no place at his school.

Noting that his voice is “rightly or wrongly considered the voice of the college,” Lewis said he felt compelled to address the “deeply troubling events in Charlottesville” at the beginning of a new academic year in hopes that dialogue and “vigorous and vehement disagreement, but not violence” would be the mantra at the Salisbury campus.

“I often have animated debates with friends and family members, but in the end we express our love for one another — and occasionally we even express our mutual respect, recognizing that our differences don’t have to truly divide us,” Lewis said. “But Nazism, the KKK, white supremacy — these are not those kind of policy or values disagreements. These are views and actions rooted in hate and lived out through fear and violence.  They have no place here.”

“I don’t want to be flip about it, but of course Nazism, the KKK and white supremacy are repugnant and must be repudiated and unwelcome here and across the nation. It should go without saying — and yet even in 2017 we are faced with having to say it, loudly and clearly,” he said. “Thankfully, many are saying it.”

Saying that college campuses are intended to be bastions of free speech and a marketplace of ideas, Lewis cited two very different visitors to the Catawba campus during the 2016-17 academic year.

“In each case, members of this community told me they were unhappy with (these visitors’) presence and that their views should not be welcomed on our campus,” he said.

He was referring to visits by Vice President Mike Pence when he was campaigning for the Trump-Pence presidential ticket and by Mark Achtemeier, a theologian and the author of “The Bible’s Yes to Same-Sex Marriage: An Evangelical’s Change of Heart.” Both came to campus to share their points of view, and neither visitor was met with violence, he said.

“The world today seems angrier and more dangerous, but in the face of all of this, I still have hope,” Lewis said.

He cited a verse from Hebrews in the Old Testament to reinforce his point: “Now faith is the substance of things hoped for, the evidence of things not seen.”

Lewis shared some pivotal moments from his own life when he said faith, hope and forgiveness prevailed. He recalled coming to North Carolina to attend UNC-Chapel Hill from Toronto, a large multicultural city where he encountered “difference wherever I went.”

During his senior year of college, Lewis said he saw other changes he never expected to see in his lifetime, like the Berlin Wall coming down, Nelson Mandela walking out of jail a free man, and Mike Tyson knocked out in the boxing ring by a relatively unknown opponent.

Lewis said he has also seen “the incredible power of forgiveness.”

As a resident of Rock Hill, South Carolina, Lewis saw John Lewis return to the city as a U.S. congressman decades after he was severely beaten at the city’s bus station in 1961 as one of the Freedom Riders of the civil rights movement. John Lewis received the key to the city and met Elwin Wilson, the man who had beaten him. He embraced Wilson when Wilson asked for forgiveness.

“The people who founded the college that is entrusted to us had vision and values in mind, not just grades or boxes checked or even careers,” he continued. “Think about the core values on our seal: Scholarship. Character. Culture. Service. And the Latin motto on the seal: ‘Sit Lux,’ Let there be light.

“Light and hope and faith begin with places like Catawba College and with people like you. Sharing honestly and openly, respectfully and thoughtfully, learning from mentors and from peers.

“Welcome to Catawba,” Lewis concluded. “We look forward to sharing this journey of change, faith, and hope with you.”

The convocation also heard remarks from Bill Graham, a 1983 graduate and chairman of the board of trustees, who shared advice with the new students.

The senior marshal commissioned was Renee McCachren, a professor of music and the senior faculty member of the college. Professor David Pulliam continues his as college marshal.