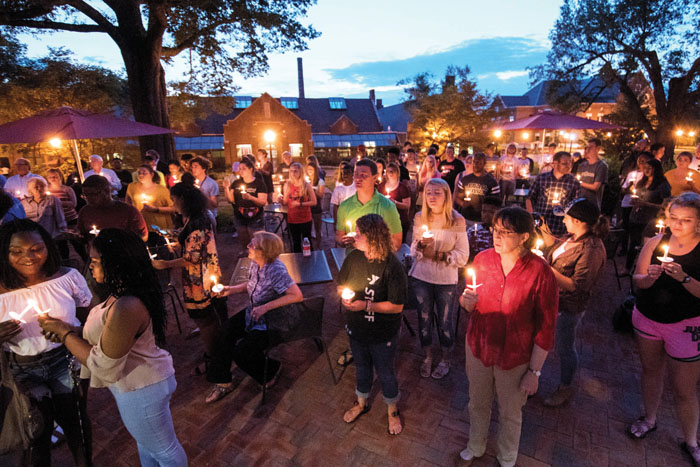 Catawba College held a candle light vigil on the terrace behind the school administration building. The college had the brief gathering to give the students and community a chance to come together after a weekend of troubling news coming out of Charlottesville, Va over the past weekend. Jon C. Lakey/Salisbury Post

SALISBURY — Catawba College junior Destiny Stone wrote the song “America” after an unarmed black person was killed in a shooting several years ago.

She can’t even remember which one it was now.

“But I do know it was in the midst of … they started having them back to back to back,” Stone said.

The song uses parts of the national anthem and “America, the Beautiful” and connects them with a rhetorical question: “But are we united?”

Stone thinks not — especially in the wake of a white supremacist rally last weekend in Charlottesville, Virginia, where a counterprotester was killed and nearly 20 others injured.

“Yes, we are the United States of America. But we’re obviously not united,” Stone said. “You know, even back to the Civil War, there was obviously a divide. Half the country didn’t want to be part of the country. So I just will continue to probably feel that way because … unfortunately, this country was founded on catering to white males.”

But she said it doesn’t have to stay that way.

The vigil was held in remembrance of Heather Heyer, the woman who lost her life in Charlottesville, and the people who were injured while protesting the white supremacist rally.

The vigil, which lasted for about an hour, began with opening words from Catawba College Provost Michael Bitzer, senior vice president Ken Clapp and two professors. All four of them commended those assembled for being there and lamented the events in Virginia.

Then several students, including Stone, took over and played original songs that expressed the pain and anger they felt about the Charlottesville tragedy.

The vigil concluded with each audience member lighting the candle of the person next to him while the group sang Bill Withers’ “Lean on Me.”

The group included faculty, students and community members, though most in attendance were Catawba students.

Catawba senior Ashton Eller was one of them. He said that although he thought the events in Charlottesville were awful, he wasn’t necessarily shocked by them.

“I was telling (someone) over there, it’s like you’re waiting. And you shouldn’t feel pessimistic, but it’s like, ‘When is this going to end?’ It just seems like there’s always something,” Eller said.

Bitzer — who, in addition to being the school’s provost, is also a history professor — said Confederate monuments have had a long history of being tied to racist ideology. But he said he sees how they can be interpreted in multiple ways.

“Being a historian, I recognize that individuals memorialize events in different ways. And I think the same granite or bronze can certainly be interpreted and seen in many different lights,” Bitzer said.

But Bitzer said that it’s important to remember that “history can hurt” just as much as it can heal.

Bitzer said the conversation surrounding Charlottesville will be continued in the next few weeks when a faculty forum is held at Catawba.