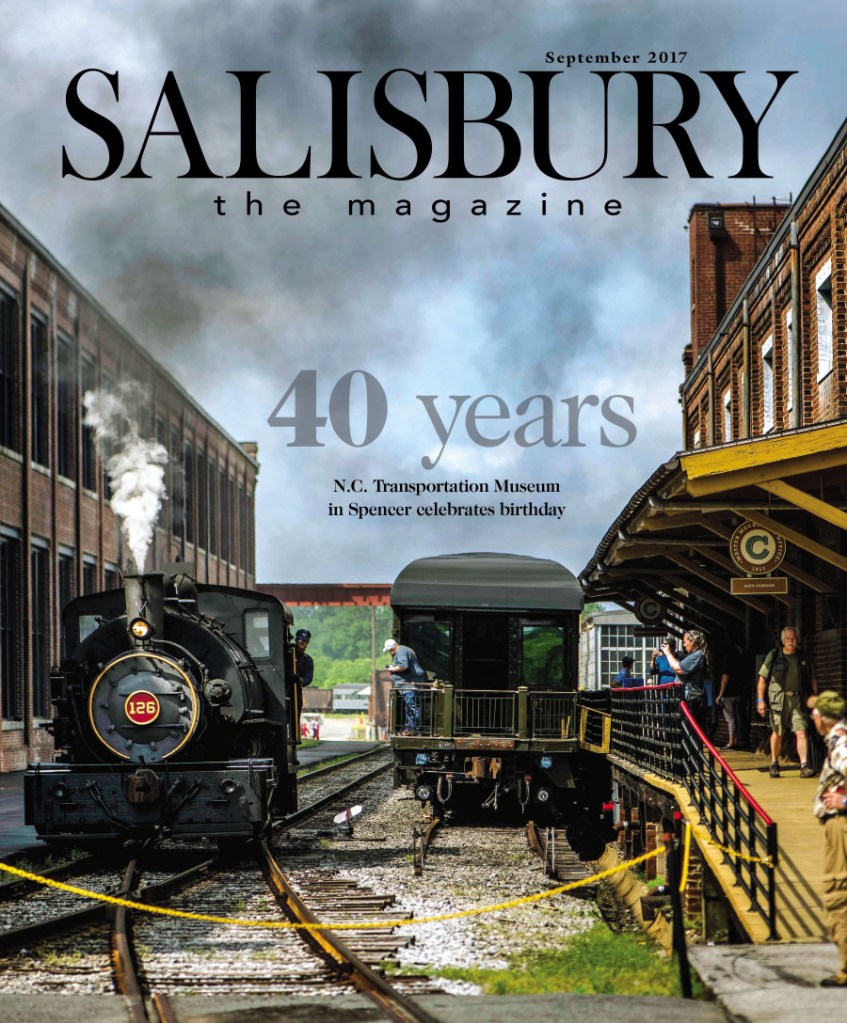 Letter from the Editor of SALISBURY the magazine, Mark Wineka

No thanks to this windbag, Spencer Shops became a museum

Back in 1981, when I was a young, foolish reporter, I found myself collecting details one evening about a storm that ripped through Spencer and tore off considerable portions of a new Back Shop roof at Spencer Shops.

Then, we still referred to the site as Spencer Shops and not the N.C. Transportation Museum, because a museum really wasn’t there yet — just the dreams of one. Though Southern Railway had donated four acres and three buildings to the state in September 1977, then more acres and more buildings in 1979, the first transportation museum exhibit wouldn’t be in place until 1983.

The Back Shop was one of the reasons why. It took virtually all of a $1.25 million state appropriation to the site one year to pay for a new Back Shop roof. And typical of the many challenges the transportation museum has faced over its 40 years, here comes a storm that rips off the new roof, which had been completed only a month before.

The next day, if I remember correctly, I wrote how “an apparent mini-tornado” tore off sections of the new roof. I took a lot of grief from my colleagues at the newspaper for that turn of phrase, as though I had officially made myself a meteorologist and at the same time hedged my bet by calling the so-called tornado “apparent” and “mini.”

To this day, I like to call any high winds I confront an apparent mini-tornado.

It has taken a multitude of heroes working like a tornado through the past 40 years to keep the vision and dream of the N.C. Transportation Museum on track. If I tried to list all their names, I know I would leave out too many important people.

But think of all the folks who lobbied Raleigh for money; who secured beautiful locomotives, cars, automobiles, trucks and airplanes for display; who cleaned up buildings and land; who served as volunteers; who worked on restoring locomotives; who organized all the events and exhibits; and who kept the history of Spencer Shops alive.

If you visit the N.C. Transportation Museum today and know how far it has come since those early years, it will blow you away like a tornado.

This issue featuring the museum site, which used to be Southern Railway’s largest locomotive repair facility, is a good time to talk about a much smaller railroad and the miniature train William and Judy Deal take care of and ride at their home in Lexington.

The miniature train has close ties to Rowan County. It once starred in the early 1950s as the main playground attraction at the Hitching Post Drive-In Theatre in Salisbury. Not many people have a train looping around their home, but the Deals do, and you’ll be amazed at their personal working-on-the-railroad story.

Have your knee replaced and go home the same day? Dr. Matthew Bullock of Salisbury Orthopaedics has started offering some of his patients exactly that option, and the magazine talks with him and his first two “same-day” success stories.

Shavonne Walker tells us about Adrian Smith, who shares his considerable musical talents with Piedmont Players, Lee Street theatre and Cornerstone Church, among others. Elizabeth Cook takes us inside the residence and “Back Home” shop of Sandy and John Hickman in the historic village section of Gold Hill.

And speaking of historic, Jody and Maggie Blackwell have taken on the restoration of an architecturally handsome 1913 church building in Salisbury in hopes of making it a music venue called “Beacon Hall.” Jessica Coates gives us the rundown.

We also drop in for a brief Q&A with Elaine Spalding, president of the Rowan County Chamber of Commerce. And Krista Woolly, executive director of the Community Care Clinic, writes a beautiful “Salisbury’s the Place” column.

September means teachers are back in school, but it’s nice to know Cindy Adkins and her daughter, Lydia, never stop making their fruit jams, jellies and butters. Deirdre Parker Smith sheds light on how these teachers spread their love.

Subscribers already have the September issue.
To subscribe visit SALISBURYthemagazine.com or call 704-797-4213.

This issue is available at the Salisbury Post, 131 West Innes Street, Salisbury, NC. It will also be available at select local businesses starting September 26, 2017. Back issues available for $3.00 an issue. Single copies are available by mail, $5.00 per copy.