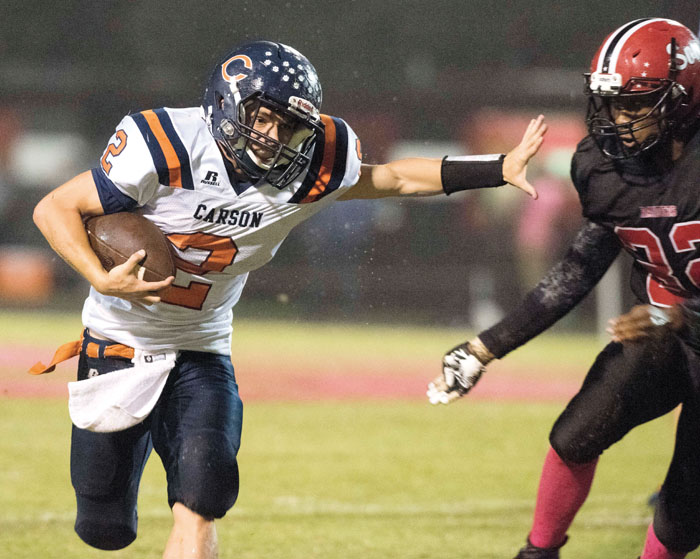 The temperature may be in the 90s, but the Week 1 high school schedule has a late-fall feel with North Rowan hosting Salisbury and Carson entertaining South Rowan.

Those traditional rivalries usually don’t roll around until after the leaves turn, but the NCHSAA’s latest realignment brought sweeping changes to the schedule for every Rowan school, and games that were once key league games are now big non-conference games. Or at least they’re as big as non-conference games can get.

In its 11-season history, Carson has opened against four different schools — Sun Valley, North Rowan, Hickory Ridge, Salisbury — but this will be the first time the Cougars have taken on South to get things started. Opening night was a total disaster for Carson a year ago, a 45-3 loss to North Rowan, but the Cougars have generally been a good opening night team with an all-time record of 6-5.

Carson’s first-ever win, after starting its football history with 22 straight losses, came in resounding fashion against North Rowan on opening night in 2008. Things change. Mark Woody, Carson’s head coach that night, is now a North assistant. Ben Hampton, who was on Woody’s staff then, is now North’s head coach.

This will be the 57th opener for South Rowan, which is 24-31-1 against a long list of opening-night opponents that includes East, North and West Rowan, Salisbury, A.L. Brown, Mooresville, Northwest Cabarrus, Central Cabarrus and South Iredell.

The Raiders have dropped six of their last seven openers, but they did surprise South Iredell in a memorable 2014 upset. Some of the amazing moments in South history have occurred on opening night, including  the 37-36 overtime win against A.L. Brown in 2003 and a 70-0 romp against Mooresville in 1978 that’s still in the record books as South’s most lopsided victory ever.

This is the 60th season for North Rowan football. The Cavaliers are 30-28-1 against 16 different opening-night opponents. We won’t list them all here, but it’s quite a diverse group, including Granite Quarry and China Grove in North’s earliest years. There were times in the Roger Secreast era when North would take on anyone, anywhere on opening night. The Cavaliers have opening-night history against programs such as Grimsley, Scotland County, A.L. Brown and Mount Tabor.

But has North ever opened against Salisbury, its biggest rival? No, it hasn’t.

Opening night history for Salisbury goes all the way back to 1915 and the 57-0 loss to Greensboro that marked the debut of high school football in Rowan County.

The school got considerably better on opening night as the years went by. From 1948-1959, coach Bill Ludwig didn’t lose any of his last dozen opening nights (11 wins, one tie). After Pete Stout got things rolling in the second half of the 1960s, there were 10 straight opening-night success stories (1968-77) on Lincolnton Road. The recent Joe Pinyan era, included nine straight opening-night wins from 2003-11.

Salisbury prevailed in two most recent openers, both against South Rowan, under coach Ryan Crowder who has moved on to the defensive coordinator position at Concord.

New Salisbury coach Brian Hinson was the head coach at East Rowan for three seasons (2007-09). Hinson’s debut at East came against Salisbury, and the Mustangs rolled that night 42-21 against a Salisbury club that was playing its second game. Hinson was 2-1 in openers at East. His last opener was a 7-0 win by the Mustangs against, you guessed it —  North Rowan.

East Rowan travels down Highway 52 to  New London to play North Stanly tonight. While the schools are 18 miles apart, the 3A Mustangs haven’t encountered the 1A Comets since 2006. East won that last meeting, 21-20 in overtime, one of the two victories East managed that season for coach Jim Crawley.

West Rowan and Mooresville is a traditional opener between neighbors that are good at football. The history of the series dates back to 1960, West Rowan’s second season,. The schools, counting playoff match-ups in 2000 and 2005, have clashed 46 times, with the Blue Devils holding a 25-21 edge.

Mooresville won the first seven meetings for a head-start in the series, but West holds a slight margin since the 1967 Falcons, West’s first strong team, broke through for a victory in the series 50 years ago. West did some serious catching up during the recent glory days, smacking the Blue Devils nine straight times (2003-10, plus a 2005 playoff game). But then it was Mooresville that ended West’s winning streak, the longest in the nation at that time, on opening night in 2011. West’s incredible streak under coach Scott Young ended at 46 games.

This will be the 15th time West and Mooresville have squared off on opening night and the seventh season in a row. West pulled the game out  last year behind late heroics by Kortez Weeks, but Mooresville has won four of the last six.

Davie vs. Greensboro Page has become a traditional opener. It’s been War Eagles vs. Pirates the last six seasons, with both schools winning threh. The teams have overheated scoreboards in the past, but both are expected to be stronger on defense than offense this season.

It will be a night of history for Davie. The War Eagles begin a new era at their new location and new stadium, about 10 miles of north of their traditional home in Mocksville.

It’s a new day at A.L. Brown, back in 3A and back in realistic contention for championships after four years of residence in the same 4A league as Mallard Creek and Hough. Despite more than holding their own in 4A, the Wonders went 0-8 against those two.

On opening night,, the Wonders are traveling to face a familiar opponent — Huntersville Hopewell — a conference foe the last four years. Hopewell shocked the Wonders in 2013, but A.L. Brown romped the last three seasons.

Readers like picks, so we’ll provide picks, although picks on opening night are pure guesses. Who knows? See Wednesday’s football section for more in-depth information on everyone.

On paper, Carson and South are even.  South stunned the Cougars, 19-16, last year, a victory that allowed South to go 1-10.  Carson QB Cole Sifford is the best returning offensive threat between the two teams. Carson has won six of the 10 meetings and five of the last six. Carson is at home. Carson 21, South 14

On paper, Salisbury and North Rowan aren’t very even. Some of the power-ratings folks have North, ranked in the top 5 in 1A by everybody, winning by 33, but this is going to be tight. North has won the last four meetings. Salisbury still leads the series 27-23-2. I’ll take Jaleel Webster, North’s defensive line and the home field. North 23, Salisbury 20

Mooresville and West is considered a toss-up. The Falcons lost a lot of great players, and they’re on the road. Mooresville 17, West 14

East Rowan and North Stanly both have a ton of starters back. North Stanly returns a 1,500-yard rusher. East has a veteran offensive line but will be running a new offense and will be breaking in new backs. There are  reasons to like North Stanly in this game, but it’s still a 3A against a 1A. East 24, North Stanly 21

Hopewell’s new head coach is Quinn Martin, who was on the East Rowan staff last year. We wish him the best, but this is the one area game in which the victor isn’t in doubt. A.L. Brown 42, Hopewell 14

It will be a great story if Davie wins its first game in its new stadium, but Page, runner-up in 4AA the last two years, might be a top-five sort of team again. Page 27, Davie 21