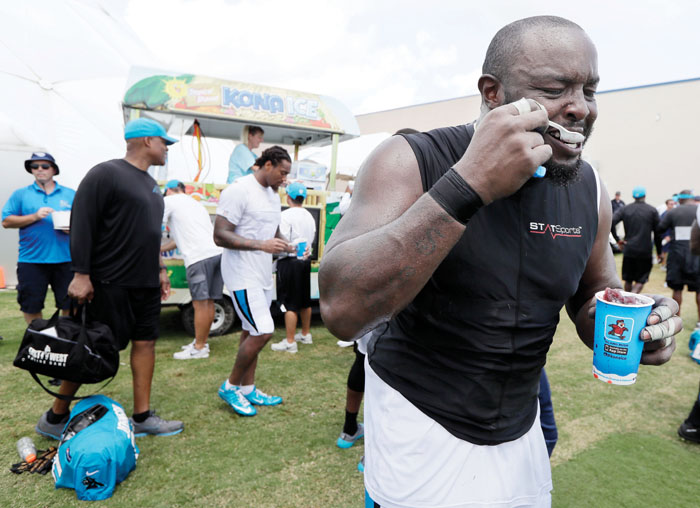 NASHVILLE, Tenn. (AP) — Cam Newton’s best during the Panthers-Titans joint practice Wednesday came while the quarterback was dancing during warmups .

That was the most action the quarterback saw with Carolina limiting his workouts because of a sore shoulder.

Marcus Mariota has no such limitations, and he showed off his healthy leg with a nice run for the Tennessee Titans. Unfortunately for Mariota, the Panthers picked off the Titans quarterback not once, but twice.

“It’s stuff that we can learn from, and that’s what’s big about this,” Mariota said.

Rain forced a one-hour delay to the first of two joint practices between the Panthers and Titans at Tennessee’s headquarters. The skies cleared long enough for a steamy and physical two-hour practice that remained very professional.

Yes, there was some pushing and shoving between linemen, but Pro Bowl linebacker Brian Orakpo called the session probably one of the most respectful joint practices he has ever participated in.

“The way they emphasized no fighting, surprised there wasn’t a bulletin board saying ‘No Fighting’ as soon as we walked into the building,” Orakpo said. “That’s how much they talked about it. We made sure we were going to be disciplined and get great work, and they did the same thing because their coach had the same message.”

Panthers tight end Greg Olsen said everybody came in with the right mindset between teams that play their second preseason game Saturday afternoon.

“I think both teams, I know our coaching staff, coach (Ron) Rivera, made a point how we’re expected to act and obviously their guys were kind of given the same message,” Olsen said. “Guys played hard. They competed. They did everything they were asked to do.”

The Titans (0-1) were such nice hosts that a small shaved ice stand was brought out so the Panthers (1-0) could grab a cool treat on their way off the fields to the buses back to their hotel.

But the Titans, who tied for sixth in the NFL with 40 sacks last season, didn’t get a chance to chase Newton at all. The quarterback has been dealing with a sore shoulder after offseason surgery to repair a partially torn rotator cuff , and he only threw passes to his own receivers early. That left Newton busy watching the Panthers’ offense while being top cheerleader.

“He’s trying to bring a little energy,” Rivera said of Newton. “At least he believes he’s bringing energy. That’s the important part is trying to get his guys going. He was into it, which is always a good thing.”

Rivera, who stayed with Carolina’s offense, said the Panthers want to see how Newton feels after throwing well in their early controlled drills and will make a decision on what the quarterback does Thursday before practice.

As much as the Titans would like to defend against Newton, they all understand why Newton watched.

“He got an injury,” Orakpo said. “They’re not going to throw him out there and risk anything for practice. We can get work done with anyone under center. But you know Cam got bored, and you know when he’s sitting around he’s going to talk trash with his team. We can talk trash too and have some fun. That’s why I kind of went up to him messing with him as well. It’s pretty cool.”

On the other field, Titans coach Mike Mularkey watched his offense and Mariota work against a 4-3 defense giving the franchise quarterback a different look than he’s seen in training camp (Tennessee uses a 3-4 scheme). Panthers safety Colin Jones intercepted a ball that went off tight end Delanie Walker, and linebacker Shaq Thompson picked off a pass to Derrick Henry.

Notes: Former Titans running back Eddie George was at practice, one of four Heisman Trophy winners on the fields along with Newton, Mariota and Henry. … Titans LB Daren Bates, who dislocated a couple of fingers in the preseason opening loss to the Jets, left practice late with a trainer holding his left hand. … Rivera said the Panthers left WR Keyarris Garrett in Charlotte with an injury.

Atlanta’s new stadium ready for business — except that…