New teachers encouraged to hold on to their passion 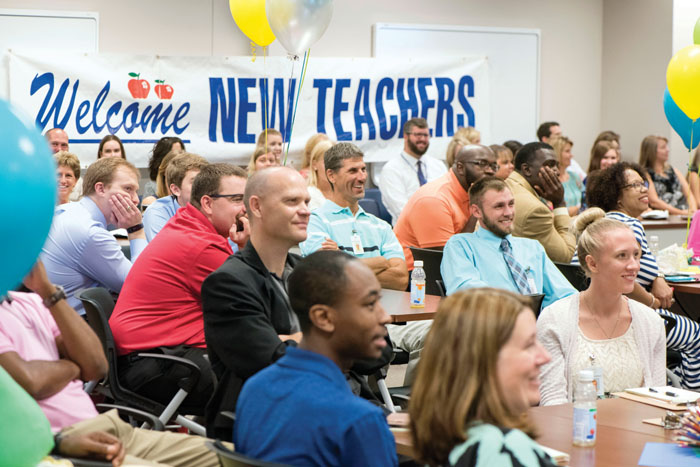 The teachers come from as far away as New York and as close as Rowan County. Some were fresh-faced and straight out of college, while others said they’d had other careers or spent time in classrooms as teacher assistants or tutors.

Maureen Jeffery, who is from New York, spent years as a college professor before making the switch to secondary school.

“For me, I always loved the teaching more than the research,” she said.

It was that love that prompted her to seek out a new career as a high school math teacher. By the time most students reach college, she said, they’re already burnt out on math. Jeffery said she hopes to inspire a changed perspective.

“I’m excited to try to reach them earlier,” she said.

Jeffery is joining the staff of Carson High School.

On the other end of the spectrum, Jena Fisher is a Rowan County native and has been a teacher assistant at Koontz Elementary for the past nine years.

Fisher said she was always interesting in teaching, but when it came time for college she decided to pursue radiology.

“My path got a little diverted,” she said.

For her, education was a siren call, and she accepted a job at Koontz before long. When she decided to pursue her certification, she knew she wanted to stay on at the school. This year, she’ll start as a fifth-grade science teacher.

“There’s something special about us homegrown folks,” she said with a smile.

After a meet-and-greet with local business leaders with the Rowan County Chamber of Commerce, the group packed into an upstairs meeting room at the Wallace Educational Forum. They heard advice from Superintendent Lynn Moody and listened to district and regional Teacher of the Year Anthony Johnson share his story.

Moody had several pieces of advice for beginning teachers, from simple housekeeping tips such as keeping a clean classroom to finding a fellow teacher who would support them throughout the year.

It will not be an easy year, she warned them.

“You will have days where everything goes well, and days where you miss the mark,” she said.

But they shouldn’t be afraid to try new things or to communicate with students about what is working and what is not. She encouraged them remember why they are there, no matter how hard things become.

“Don’t let anybody take your passion; you keep that,” she said.

Johnson, a fourth- and fifth-grade science and social studies teacher at Isenberg Elementary and 2017 Teacher of the Year, shared his own story. Johnson is district and regional teacher of the year, an Apple Distinguished Educator and a TED educator.

“These are titles that I never thought would be associated with my name,” he said.

As a child, Johnson hated school. He told the group that he failed fourth, seventh and eighth grades before eventually being asked to leave school in ninth grade. He pursued his GED and lived life paycheck to paycheck.

“Having a GED in New Orleans is a death sentence for a young black male,” he said.

About the time Johnson and his family moved to Rowan County, Johnson’s mother passed away. Within six months, so did his father. Johnson said he fell into a deep depression and began thinking about where his life went wrong.

“Where did I go wrong? Fourth grade,” he said.

It was enough to inspire him to go to college and pursue a career as a band director. As part of his major at Livingstone, he did community service in a classroom at Isenberg Elementary.

“It was like I walked back in time,” he said.

Johnson said he saw himself in his students. When he went back to Livingstone College, he changed his major to elementary education, and he hasn’t looked back since.

His classroom is structured collaboratively, without traditional desks or rows. Students post their work online for the world to see. And Johnson teaches real-world lessons by requiring that students use “Johnsonville dollars” to pay rent for their seats, purchase old materials or get treats.

Johnson encouraged new teachers to find their “why” — their reason for teaching — and to never let go and never stop inspiring students.

“We have to inspire our students,” he said, “because there could be an Anthony Johnson in your class this year.”