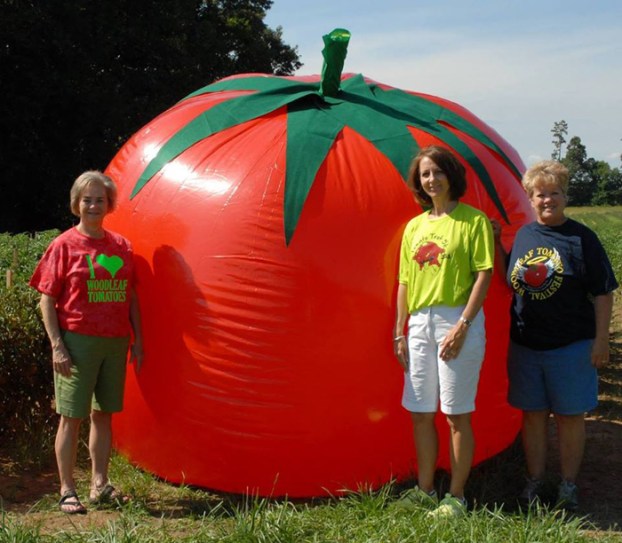 ‘All Things Tomato’ to be celebrated at Aug. 19 festival From the late 70s or early 80s, Libby Wetmore Watson at the family farm.

WOODLEAF — The 11th annual Woodleaf Tomato Festival, planned for Saturday, Aug. 19, at Unity Presbyterian Church, is looking back at tomato-growing history in the community, with the theme: “110 Years of Tomato Farming.”

Church planners of the festival figure that it was just after the turn of the century when brothers Hubbard and Radford Bailey began farming tomatoes for market. From research in the 1980s by the late Guy Etheridge, the church has records that state that a good part of their crop was hauled by one-horse wagon to Statesville.

Radford Bailey’s sons, Ira and Hugh Bailey, expanded the original farm operation, forming a partnership that lasted for several decades. Here is part of Etheridge’s account, written for a one-time Woodleaf Tomato Festival, held in the summer of 1985:

“One innovation was the raising of tomato plants in a hot bed heated by steam piped from a boiler located at the site. The hot bed was covered with window wash to protect the plants from the elements. Condensation from the steam was piped into a ditch beside the road by the plant bed.

“Later, the window sash covering was discarded and the plant beds were covered with cotton sheeting, treated on site with paraffin, which had been melted to a liquid stage by steam heat. The sheeting was dipped into the paraffin. The excess paraffin was wrung by hand from the sheeting.

“At about this time, other families were beginning to raise tomatoes for market. Harold Bailey, son of Hubbard Bailey, and Frank Correll and his sons were becoming involved. Soon, the tomato farmers added other crops to their program. Cantaloupes, carrots, beets, spinach, corn and snap beans were raised and marketed.

“By this time, the one-horse wagons had given way to trucks and much of the produce was trucked to Roanoke and Lynchburg in Virginia and Winston-Salem, Greensboro and Charlotte. Also, produce was loaded on refrigerated rail cars at the Woodleaf depot and shipped to cities in the northern section of the country.

“The Bailey brothers, Ira and Hugh, were the first in the state to market tomatoes raised in greenhouses. Originally, they heated the greenhouses with wood. They learned about hothouse production at the University of Kentucky, and upon visiting the university, decided it would be feasible in Woodleaf. They were early users of plastic coverings for the hothouses, instead of the far more expensive glass. Greenhouse tomatoes proved to be a very profitable venture and soon other farmers followed. Greenhouse tomatoes are very much a marketable crop today.

“Tomato farming became a family tradition in the community. Three generations of the Bailey family raised tomatoes commercially. The Correll family is still very active in the business. Others who have become involved the June Fleming family, the Wetmore brothers, Bill Gibbons, Rick Moore, the late Neely Moore, Jimmy Myers, the J.B. Collins family and others.

“The vegetable farms not only provided income for the farming families, but also provided summer employment for many, many young men of the community.”

In a 1950 “Roamin’ Rowan” article in the Salisbury Post, the late Mack McKa wrote about Woodleaf tomato farming under the headline: “Bailey Brothers Beat Nature At Own Game.”

Here is a portion of his article: “Ira Bailey, the older brother, says he has been trying to learn how to raise early tomatoes to a profit for 42 years, and when the weather gets contrary, he says he sometimes wonders just how much he has learned.

“However, the Bailey boys have succeeded in taking much of the gamble out of early tomato raising, by using methods they have figured out, by way of experience … but they still run into bad and medium years, as well as good years.

“Ira’s experience dates a ways back to the days when folks put manure in a warm-bed, and planted just about any type of early tomato seed in the bed to raise plants …. Then they set their plants far apart in the field, about the same as checked corn is planted, and later when the plants put on nice tops and started blooming or setting on small tomatoes, a dry spell would come along and presto, there would be mighty few good early tomatoes to sell.

“Now we raise our tomato plants in a warm-bed, heated underneath by electricity and steam heat,” says Ira. “We can control the heat and keep it right where we want it, and that is the advantage over using stable manure in the bed.”

“Some 6,000 plants are set out by the Baileys to the acre now, as compared to 3,000 to 3,500 plants set out to the acre in the old days … but as Ira says, ‘We cooperate with the Lord, in that we have a large lake of our own, and when the Lord is sprinkling the rain about at other places over the United States, we provide regular ‘rain’ over our tomato field.’

“The Bailey tomato vines are staked up, some of them at present being four to six feet high … and if you think it is an easy and cheap job to stake up some 17,000 tomato plants under a hot sun, just try it on your 25 to 50 tomato plants in your garden some hot day.

“The Baileys started their sixth week of tomato picking on their two and three-quarters acres tomato “patch” last Wednesday, and there are many green tomatoes left on the vines in the section where the picking started.

“The tomatoes are hauled in bushel baskets to a large sorting shed near the Bailey barns at Ira’s place…. A total of 101 baskets were picked one day last week, the best day so far, but the average day runs around 60 bushels, Ira says.

“Warm sunshine and dry weather is most desirable, when tomatoes are being gathered. ‘we don’t have to worry about our tomatoes suffering from sunburn, for tomatoes that are staked up well and irrigated regularly do not sunburn,’ says Ira. “It is when vines lay close to the ground, and the sun comes out hot after a rain that they get a baking.”

WOODLEAF — This year’s Tomato Festival (www.facebook.com/woodleaf.tomato) will be held from 9 a.m.-4 p.m. on Saturday, Aug. 19, at Unity Presbyterian Church. The festival is a free, family focused all-day event now in its 11th year. It is always held on the third Saturday in August, determined to be the time when the tomato farmers in the community are between their first and second crops of the season and have time to attend.

Proceeds go to Unity Church and mission work. Tomatoes are grown in Woodleaf from spring until October.

The stage, erected in the historic church yard in front of a large shade tent furnished by the Lazy 5 Ranch, is busy all day with live entertainment and children’s contests such Little’Mater Blossom, Little Miss Tomato Sprout, and Little Tommy Toe. There is a tomato eating contest, a best-tasting tomato contest, and a tomato recipe cook-off contest.

There is a children’s play area, including a bouncy house; a Tomato Hole tournament (think corn hole); bake sales, and booths with ice cream, salsa, and ham biscuits. The West Rowan High School FFA will sell hot dogs and hamburgers in the church picnic area. Of special interest: church members prepare the traditional tomato sandwiches, selling them as fast as they can get the tomato slices between slices of bread.

Fresh vegetables and fruits from nearby farms are always a big hit. Craftsmen will demonstrate some of their work.

Woodleaf’s “Home Grown da’Maters,” a dance team, will perform. Festival-goers wear tomato shirts and tomato hats, turning the church yard into a sea of red. The “Big Tomato,” a giant 10-foot inflatable tomato donated to the festival by Rowan County Sheriff Kevin Auten, will be on site. It’s a favorite picture-taking spot.

Competition is under way to name the Woodleaf mayor, chosen by the candidate who raises the most money. The new mayor will replace David Dowell, who has served as mayor since last year’s festival. It is a great political job: There are no responsibilities, except a love of all things tomato. Woodleaf is unincorporated, so it is all in fun.

David Barrier of Your Dream DJ Productions will be the emcee. Proceeds from the church fund-raiser helped pay for a new fellowship hall and continue to be used for Unity Church and other mission work.