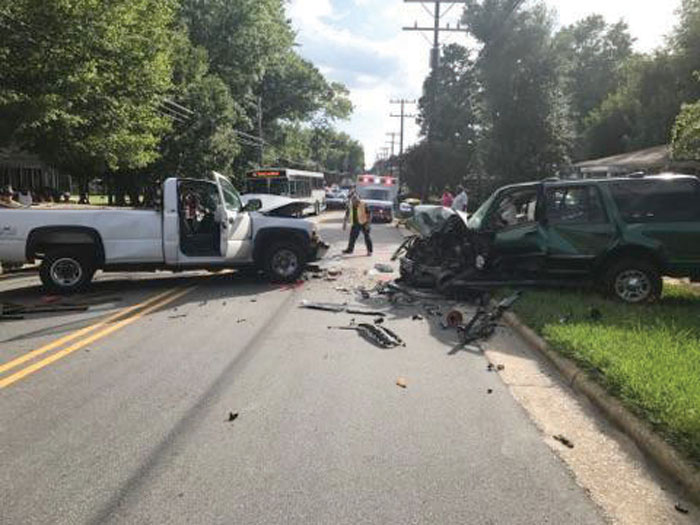 Police say the driver of this pickup, left, ran following the collision at North Long and Kenley streets on Tuesday. A toddler in the green sport utility vehicle was critically injured and flown to a Winston-Salem hospital. Submitted photo

SALISBURY — A man ran from a two-vehicle crash that critically injured a toddler at North Long and Kenley streets Tuesday.

Police want to find him.

The crash occurred about 5:35 p.m. Tuesday and involved a 2000 Ford Expedition that was struck head-on by a 1999 Chevrolet Silverado. Salisbury police officials said the driver of the pickup crossed the center line.

The driver of the sport utility vehicle was Tanya Steele. She had leg and arm injuries and was taken to Wake Forest Baptist Medical Center, where her child was also flown by helicopter. Another child, Trina Ford, 2, was not injured.

A third passenger, Qwanisha Lark, who was sitting in the front passenger seat, received minor injuries. She was treated and released from the hospital. Police say the driver of a Chevrolet Silverado, not shown, ran following the collision at North Long and Kenley streets on Tuesday. A toddler in this green Ford Expedition was critically injured and flown to a Winston-Salem hospital. Submitted photo

Beam said Daniels and Blackwell were believed to be seated in the second row and the children in the third row.

The owner of the truck, Michael Lynn Beck, was a passenger in the pickup. Police say Beck was not cooperative and told officers that he knew only the first name of the man driving his vehicle, which was possibly Mark. Beck was not injured.