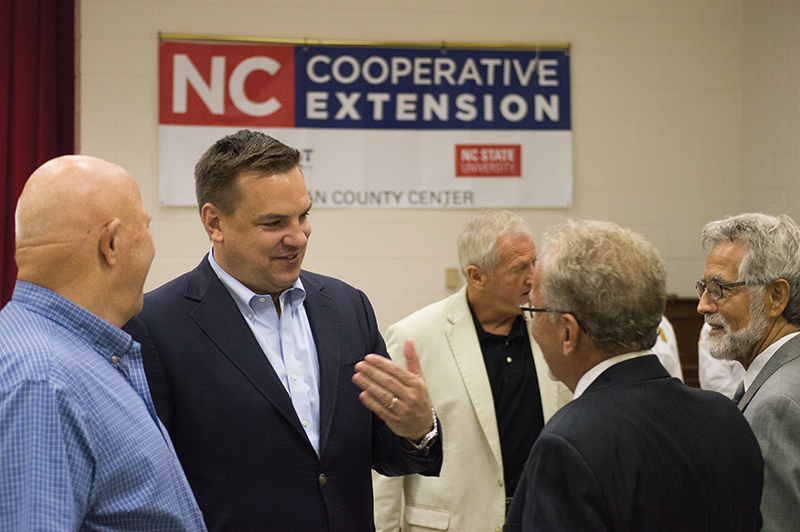 SALISBURY — U.S. Rep. Richard Hudson says there’s still time to pass health care reform before the end of the year, and the U.S. Senate is to blame for failing to do so.

Hudson, a Republican who represents the 8th Congressional District, made his remarks after attending a ceremony at which he received an award for introducing a bill related to emergency medical services. His bill would give paramedics and other EMS workers a standing order to administer narcotics, anti-seizure medications and other controlled substances. It passed the House in January but hasn’t yet passed the Senate.

In a ceremony attended by a number of local officials, EMS workers, business leaders and others, Hudson received the 2017 EMS Legislator of the Year Award. Rowan County EMS Chief Lennie Cooper presented the award on behalf of the National Association of Emergency Medical Technicians.

After receiving the award, Hudson spoke about the importance of work performed by EMS professionals and called his bill common-sense reform.

Before and after Tuesday’s ceremony, Hudson also spoke to the Salisbury Post about the state of Republican efforts for health care reform.

Republicans control the House, Senate and the presidency. Asked why Congress hasn’t passed health care reform, Hudson said the Senate is at fault. He said every Republican senator has an idea about what health care reform should look like.

“They’ve got to come together and find one they can agree on,” Hudson said. “They just haven’t been able to get their personalities out of the way. … The Senate’s the problem.”

Congress still has a chance in September to pass health care reform, he said. Both houses of Congress are in an August recess.

Hudson also stood behind his support of the health care bill that passed the House in May. It wasn’t a perfect bill, Hudson said, but it was a good first step in a multipart process.

“I still stand behind it, and we’ll just have to see what the Senate comes up with,” he said.

The Senate has tried and failed many times to pass several versions of health care reform. The most recent attempt failed when three Republicans voted against a so-called “skinny repeal” bill.

From “skinny repeal” to the American Health Care Act — the House version of health care reform — the Congressional Budget Office found that millions more people would be without insurance under Republican plans.

The House bill that Hudson supported would shave $337 billion off the federal deficit from 2017 to 2026, according to Congressional Budget Office estimates. Tax revenue would be reduced because of tax cuts that disproportionately benefit the wealthy. An estimated 52 million people would be uninsured in 2026 if the bill is passed, according to a CBO estimate of an early draft of the bill.

“I can’t speak for the Senate,” Hudson said. “I don’t know what’s going on in the Senate, whether you can pin that on Trump, the senators or what. I don’t really know how to answer for the senators.”

If Republican plans for health care reform don’t work out, Hudson said, he is willing to work with Democrats to find a solution. However, Hudson said he won’t support a single-payer solution, sometimes called “Medicare for all.”

“At a telephone town hall, I get 10,000 people on the phone and I can get through six or seven questions in an hour and have a real discussion,” he said. “I’ve done over 135 public events like this one. To me, that’s a better use of my time.”

On Thursday, Hudson will be in Salisbury again. He’s scheduled to tour the W.G. “Bill” Hefner VA Medical Center.