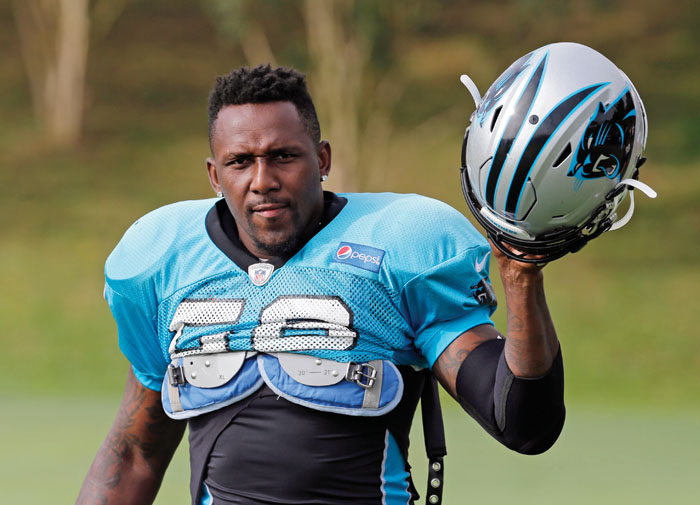 FILE - In this Friday, July 28, 2017 file photo, Carolina Panthers' Thomas Davis (58) waves the fans before practice at the NFL team's football training camp at Wofford College in Spartanburg, S.C. Thomas Davis won’t have to worry about ever playing for another NFL team. The Panthers have signed the 34-year-old veteran outside linebacker Thomas Davis to a one-year contract extension, keeping him with the team through the 2018 season, Tuesday, Aug. 15, 2017. (AP Photo/Chuck Burton, File)

CHARLOTTE (AP) — Thomas Davis won’t have to worry about ever playing for another NFL team.

The Panthers have signed the 34-year-old veteran outside linebacker Thomas Davis to a one-year contract extension, keeping him with the team through the 2018 season. The deal is worth $6.76 million and includes $3 million in guaranteed money, according to a person familiar with the negotiations. The person spoke to The Associated Press Tuesday on condition of anonymity because the team doesn’t release financial terms of contracts.

“I’m extremely excited. Everybody knows how I feel about being a Carolina Panther,” Davis said in a team release Tuesday. “This extension solidifies me being here for the rest of my career, and I’m excited about that. Now I’m totally focused on winning a Super Bowl.”

Davis’ contract was set to expire after this season. Some blamed general manager Dave Gettleman’s handling of extensions for Davis and tight end Greg Olsen as the reason he was fired earlier this offseason and replaced by interim general manager Marty Hurney. Olsen has two years left on his current contract but is seeking an extension, too.

Davis has been an amazing story, returning from three torn ACLs in the same knee earlier in his career to become one of the league’s best linebackers. He earned All-Pro honors in 2015 while helping the Panthers reach the Super Bowl. He has been selected to the Pro Bowl the last two seasons.

He was drafted by the Panthers in the first round in 2005 and has spent his entire career in Carolina.

Davis is the franchise leader with 1,086 tackles. He has played in 149 regular season games with 131 starts, both team records for a linebacker.

“Thomas is still playing fast and at a high-level, and the intensity and passion that he brings to the game is unmatched,” Panthers linebackers coach Al Holcomb said in a release. “He is the ultimate leader, and to continue to have a player and a man of his magnitude on our team is extremely important. I’m excited for Thomas, his family and our organization.”

Davis led Carolina with 132 tackles last season and chipped in with three interceptions. He also scored his first career touchdown on a 46-yard fumble return versus Arizona.

Behind Davis, the Panthers finished second in the NFL with 47 sacks and tied for fourth in the league with 17 interceptions last season.

Since returning from this third ACL injury in 2011, Davis has elevated his game.

In the past five seasons he has averaged 130 tackles per season, including a career-high 151 in 2013. During that span he has 10 interceptions, the second-most among NFL linebackers behind only teammate Luke Kuechly with 12.

Davis has become a fan favorite in Charlotte.

In 2014, he was named the Walter Payton NFL Man of the Year. It is an award given out annually at the Super Bowl recognizing a player’s off-the-field community service as well as his playing excellence.