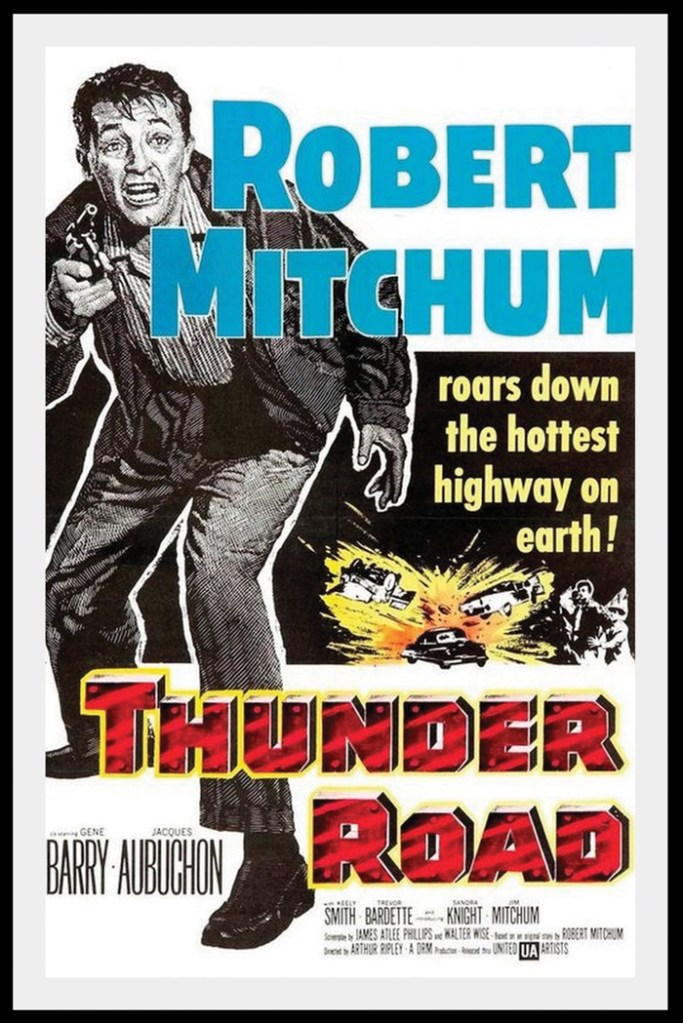 Courtesy of Mike Cline The movie poster for 'Thunder Road,' released in 1958.

“Let me tell the story, I can tell it all;
About the mountain boy who ran illegal alcohol.
His daddy made the whiskey, the son he drove the load;
When his engine roared, they called the highway “Thunder Road.”

These are the opening lyrics to “The Ballad of Thunder Road,” written by the film’s star and co-producer, Robert Mitchum.

The summer of 1958 found hundreds of drive-in theaters in the Southern United States setting box-office records when the moonshine movie came to their towns. Mitchum — who would have been 100 earlier this month — played Lucas Doolin, a veteran who comes home from the Korean War to his mountain home and takes over the family moonshine business.

And lots of theater owners, including my family, were glad he did. The Cline clan owned and operated both of the Statesville drive-ins throughout the 1950s.

Rarely was anything special done to advertise our drive-in attractions, other than a daily ad in the local newspaper. But I recall getting an idea that this “Thunder Road” movie might be something special when I saw all the trucks of the family trucking business plastered with big posters heralding that the movie was headed to Statesville.

Movies playing our theaters more than three nights were as rare as kryptonite meteorites. “Gone With the Wind,” “Ben-Hur” and “The Ten Commandments” had stretched to as many as seven. “Thunder Road” ended up playing 22 consecutive nights — two showings per night and with 400 cars each showing.

Filling up the lot Fridays, Saturdays and Sundays was the norm in the late 1950s, but Mondays and Tuesdays? Never, until “Thunder Road.”

The Highway Patrol had to direct incoming and exiting traffic on Highway 64. Fortunately, entering cars came from one direction and autos leaving went out another way.

“Thunder Road” was a natural for Southern drive-ins. Mitchum wrote the original story, and being co-producer, he owned a piece of the action. He once said in an interview that he made more money from this one movie than he had made in all the movies he had made up to that time put together. And that covered a 15-year period. He first appeared in features in 1943.

Portions of the movie had been filmed as close as in Wilkes County and Asheville, so lots of patrons talked of  “I’ve been there” or “I know where that is” as the movie flickered on the screen.

And, lo and behold, appearing as a prop in a scene shot in the woods at the Doolin still, leaning against a tree, was a burlap sack with the logo of Statesville Flour Mill. A local reporter contacted my father, asking if he could clip out one frame of the movie showing the Statesville Flour Mill sack.

United Artists, the film’s distributor, probably would not have been happy to hear that my dad obliged the journalist, who enlarged the 35mm frame into a three-column photo and accompanied it with a nice article mentioning how Statesville was now on the map when it came to the movies.

In addition to Mitchum profiting from “Thunder Road,” my family came out of it pretty well, too. Certainly not on the scale of Mitch, but a few months after Lucas Doolin had moved on to a better place, my mother was driving around town in a 1959 DeSoto, a humongous car with a radio aerial sticking out of each of the big fins on the back. It was white with baby blue trim and had a push-button transmission.

My feisty mother, all 5-feet-1 of her, had to sit on a pillow to see over the dashboard to navigate the vehicle. Approaching motorists probably swerved off the road when they saw this tank of an automobile approaching them, with no visible sign that anyone was driving it.

But she drove that car for about five years before admitting that she “really didn’t need a car that large.” She traded her “Thunder Road” car for a Plymouth Valiant. Also push-button transmission.

“Thunder Road” returned numerous times to our drive-ins and always pulled good crowds. Not like in the summer of 1958, but good. The movie actually played, at least in and around the Charlotte towns, until the early 1980s (even after many exposures on television). By then, the 35mm film prints were so worn out, they could hardly get through a projector.

This movie of moonshine and revenuers was never equalled in terms of tickets sold for drive-in theaters in the South.

“Thunder Road” is an amazing movie, in terms of the records it set. Its history at Salisbury and Rowan County theaters is astounding. The movie played at local theaters 30 different times, as late as 1981. Only “Gone With the Wind” had more Rowan bookings, and it was released 19 years before Mitchum “drove the load.”

“And there was thunder, thunder over “Thunder Road,”
Thunder was his engine and white lightning was his load.
And there was moonshine, moonshine to quench the devil’s thirst.
The law they never got him ’cause the devil got him first.”

Mike Cline lives in Salisbury. His website, Mike Cline’s Then Playing, documents every movie played in Rowan County theaters from 1920 to today.