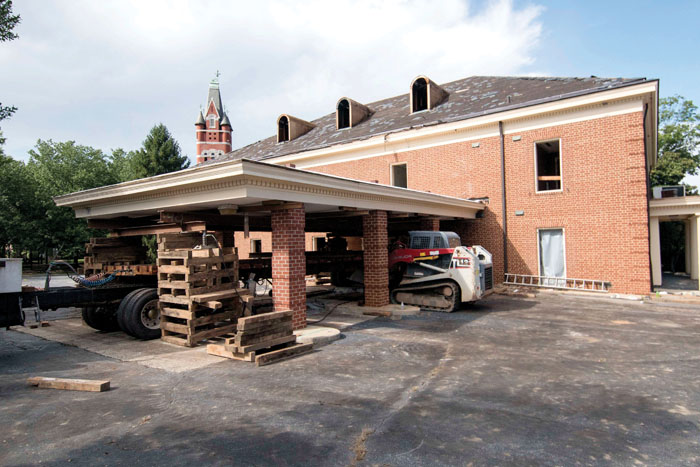 Crews have returned to the former First Bank Building on West Innes Street to make the final preparations before the building will be demolished. Jon C. Lakey/Salisbury Post

SALISBURY — A demolition crew and equipment are poised to raze a former bank building at West Innes and South Church streets. The work could start as early as today, weather permitting.

Walser works for the Blanche and Julian Robertson Family Foundation. The razing of the 1973 bank building, originally the Salisbury headquarters for First Union bank and most recently a branch of First Bank, will pave the way for initial development of a downtown park or commons.

Much of the materials from the 6,200-square-foot building, which had to go through some asbestos abatement, are being repurposed. Windows from the bank have gone to Jody and Maggie Blackwell for use in their restoration of a 1913 church on Ridge Avenue.

Central Piedmont Builders is expecting to recycle the brick, metal and concrete.

Doors from the building have gone to people in and outside Salisbury, Walser said.

D.H. Griffin Cos. of Greensboro is doing the demolition. After the area is cleared of debris and leveled, grass seed will be planted as a temporary measure to hold the soil. When construction of the park begins, the acreage will require new soil and the installation of an irrigation system.

The Robertson Family Foundation is aiming to create a public-private partnership to pay for the new park with an independent board to oversee it. The 3.5 acres in total will be bounded by West Innes, South Church, West Fisher and South Jackson streets and have the Bell Tower as a focal point.

Early design plans call for the park to be dominated by a circular lawn or commons. The former Wrenn House, originally the 1839 Salisbury Female Academy, will remain.

Other key elements in a master plan include public restrooms, a children’s sculpture playground, a water wall, perennial garden, trellis stage, small amphitheater, a dining terrace next to the restaurant, benches, a few paths, new trees, local quarry stone, a garden edge to the commons area with seating and some diagonal parking spaces next to the park.