David Shribman: Reading list for Trump — all the presidents’ biographies 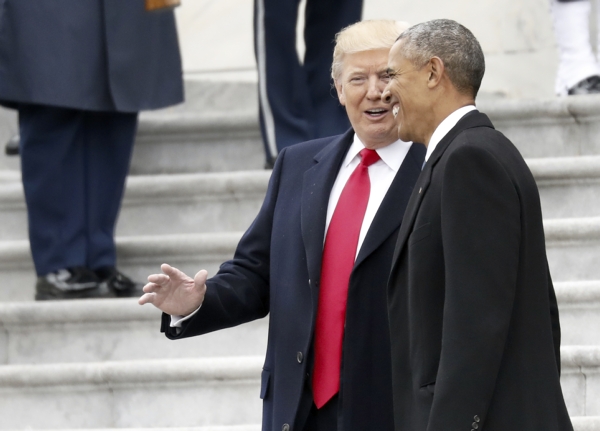 President Donald Trump and former President Barack Obama talk, as they pause on the steps of the East Front of the U.S. Capitol as the Obama's depart, Friday, Jan. 20, 2017 in Washington. (AP Photo/Alex Brandon)

George W. Bush was a frenetic reader — 95 books one year as president. Impressive, until you consider what Theodore Roosevelt read in the White House in 1902 and 1903, which included portions of Dante’s “Inferno,” Milton’s “Paradise Lost,” “Beowulf,” Sophocles, Euripides, Aristophanes, Aristotle and histories of the early Syrian, Chaldean and Egyptian civilizations, along with five Shakespeare plays — and tales from Hans Christian Andersen and the Brothers Grimm.

But he was not alone. “Not all readers are leaders,” said Harry Truman, whose home library of 1,100 books in Independence, Missouri, included Sandburg’s life of Lincoln and biographies of Andrew Jackson, Martin Van Buren and both James and (surprise!) Marilyn Monroe, “but all leaders are readers.”

Here’s a presidential reading list, for Trump or for any of his 320 million fellow Americans:

• “His Excellency: George Washington” by Joseph J. Ellis (2004). There are scores of superb biographies of the first president, but perhaps the most approachable is this volume, by the Mount Holyoke professor who has written several biographies of early American leaders. His Washington “managed to levitate above the political landscape,” in part because the Virginia general transformed “his natural aloofness into an asset.”

• “William Henry Harrison” by Gail Collins (2012). This New York Times columnist may not be Trump’s favorite writer, and President Harrison, who lasted in office merely a month, may not on the surface offer many lessons for the current president, but this book is a masterpiece of perspective and a glimpse of an America long forgotten.

• “Lincoln” by David Herbert Donald (1995). Clinton rated this book one of his favorites, and there is much to commend it. Learned but not forbidding, it is, as Donald writes in the outset, “a biography written from Lincoln’s point of view,” one of those rare presidential biographies that “seeks to explain rather than to judge.”

• “Wilson” by A. Scott Berg (2013) or “Woodrow Wilson” by John Milton Cooper Jr. (2009). Our only scholar-president, Wilson offers important lessons in the power of rhetoric in politics and, it must be said, the futility of idealism in politics. Wilson discovered that, in the White House, book learning was no assistance in the presidency — a notion that Trump might find comforting.

• “Coolidge” by Amity Shlaes (2013). Some biographies affirm the public view of a president, others alter it, and this volume falls firmly in the latter category. In public image, Coolidge was conservative, taciturn, uninspiring. In these pages he is smart, crafty, articulate.

• “Roosevelt: The Soldier of Freedom” by James MacGregor Burns (1970). The great Williams College student of leadership made FDR a cottage industry, and this volume is perhaps his best — a Pulitzer Prize-winner that argues that the 32nd president “could be bold or cautious, informal or dignified, cruel or kind, intolerant or long-suffering, urbane or almost rustic, impetuous or temporizing, Machiavellian or moralistic.”

• “Truman” by David McCullough (1992). No single book has transformed the image of an American president as profoundly as McCullough’s 2001 biography of John Adams, but his earlier work on Truman comes close. In these pages, FDR’s successor may emerge as an accident but a fortunate one. McCullough speaks of Truman’s “native-born optimism and large faith in progress,” but at base the president was, as Truman wrote his wife, “just a common everyday man whose instincts are to be ornery, who’s anxious to be right.”

• “Eisenhower in War and Peace” by Jean Edward Smith (2012). Eisenhower, too, is enjoying a surprising revisionism, and he is portrayed in these pages as sagacious and self-confident, much like the country he governed in those years. “Ike had no need to prove himself,” Smith wrote, which was proof itself that he was a more successful president than contemporaries believed.

• “The Years of Lyndon Johnson” by Robert A. Caro (1982, 1990, 2002, 2012). In these four volumes, with a fifth to come, Johnson’s life and times are laid bare, often mercilessly, sometimes with great mercy. Caro’s life of Johnson is a magnificent obsession, producing a series of books that explain the peculiar political culture of Texas and the factors that combine to produce the peculiar political culture of our time.

• “Richard Nixon” by John A. Farrell (2017). The author, a former Boston Globe Washington bureau colleague of mine, has written a fair-minded biography of Nixon, portraying him as both tenacious and tortured. The volume, published this March, was an instant best-seller and may be destined to be regarded as the best one-volume biography of the man who saw triumph in China and tragedy at Watergate.

• “Destiny and Power: The American Odyssey of George Herbert Walker Bush” by Jon Meacham (2015). This is an insightful look at a one-term president who has emerged as an avatar of grace, even if his years in the White House were full of tumult. The lesson from this volume is that an even temper, an approach to politics that stresses service rather than ideology, and an instinct for the prudent rather than for the showy can pay dividends.

David M. Shribman is executive editor of the Post-Gazette in Pittsburgh.