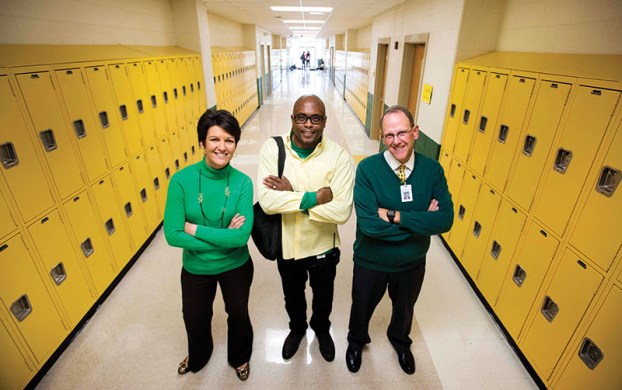 JON C. LAKEY / SALISBURY POST North Rowan is trying an alternative administration style for their middle and high schools. North Rowan high school principal Meredith Williams (left) and North Rowan Middle School principal Carl Snider (right) will work closely as a team with Alexis Cowan (center), who will be a floating principal between the two schools. The idea is to foster more of a community school environment in which students will be more familar with each other from early on. Friday, November 18, 2016, in Spencer, N.C.

Laurels to increasing salary supplements for principals in the Rowan-Salisbury School System. The school board discussed a plan this week aimed at improving the chances that small, rural and/or struggling schools will be able to hang on to good principals. This goes hand-in-hand with recruiting and retaining good teachers, because a principal can make or break a school. A report from the School Leaders Network says principals account for about 25 percent of a school’s influence on student academic performance.

Jamie Durant of West Rowan High School, named in 2016 as the school system’s principal of the year, once explained to a reporter that he started out as a teacher. But he had an itch to do more. “How do you have a bigger impact?” he said he wondered — and found the answer in administration.

Principals do indeed have a big impact, yet low-income students who need their leadership the most see greater principal churn than others. High-achieving principals — like many top-level teachers — tend to migrate to schools with higher income levels, higher achieving students and fewer minorities. They are needed everywhere.

Dart to the pessimistic, victim mindset that has spread throughout large swaths of the population. J.D. Vance describes the problem in his bestselling memoir, “Hillbilly Elegy.”

“There is a cultural movement in the white working class to blame problems on society or the government, and that movement gains adherents by the day.

“Here is where the rhetoric of modern conservatives (and I say this as one of them) fails to meet the real challenges of their biggest constituents. Instead of encouraging engagement, conservatives increasingly foment the kind of detachment that has sapped the ambition of so many of my peers. I have watched some friends blossom into successful adults and others fall victim to the worst of Middletown’s (Ohio) temptations — premature parenthood, drugs, incarceration. What separates the successful from the unsuccessful are the expectations they had for their own lives. Yet the message of the right is increasingly: It’s not your fault that you’re a loser; it’s the government’s fault.”

Laurels to the 600 jobs Kannapolis would gain with the opening of an Amazon warehouse in 2019. The Kannapolis City Council approved an incentive package Monday for a 1 million-square-foot, $85 million distribution center to be built on Macedonia Church Road, just east of Coddle Creek Parkway. That’s about 20 miles from the heart of Salisbury, and just five miles from another Amazon warehouse in Concord. The Amazon jobs coming to Kannapolis would not be high-paying or high-tech. The main order of business will be boxing and shipping orders for kayaks, rugs, bikes and the like; average wages with benefits would be $31,140 a year. That’s relatively low, but a flourishing economy needs jobs of all kinds. Not everyone can be a biotechnology scientist.

Editorial: Fire and fury on US soil

In a display that the Charlottesville newspaper headlined “Fire and Fury,” hundreds of men bearing burning torches paraded through the... read more